How should we think of Hollywood and its constant mockery of the faith?

When I recently saw trailers on the television for a new show that mocked Christian televangelists, I had two initial reactions: One, here we go again: Hollywood ridiculing, slamming and maligning Christianity; and two, well, sadly there are enough Christian ‘ministries’ out there that really give such shows license to go for the jugular. 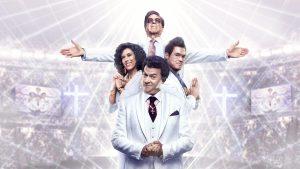 So let me discuss each one in turn. The new TV show is called “The Righteous Gemstones.” It appears to be all about a corrupt, carnal and greedy family of Christians who are making it big as televangelists. They are conning and ripping off the masses while living lifestyles of the rich and famous. One description of the show written up late last year goes like this:

HBO has given a pilot order to a half-hour comedy that hails from creator Danny McBride. The project is titled “The Righteous Gemstones.” It is the story of the world famous Gemstone televangelist family, which has a long tradition of deviance, greed, and charitable work, all in the name of the Lord Jesus Christ.

John Goodman will star as Eli Gemstone, the patriarch of the Gemstone family. The character is described as unbending and a force in the Ministry game. He’s known the world over for his aggressive salvation techniques, his worldwide ministries, and his award winning weekly television program. His light is fading, but he takes no guff. He is obeyed, unquestioned.

In addition to writing, directing, and executive producing, McBride will also star as Jesse Gemstone, the eldest son and “heir to the throne.” He walks in his father’s shadow while simultaneously blazing his own path. Like Eli, Jesse demands loyalty from those in his circle, and surrounds himself by those that will follow him. Jesse fancies himself a maverick in the ministry game, taking what Eli has built and expanding it for a more modern audience. variety.com/2018/tv/news/danny-mcbride-john-goodman-hbo-comedy-pilot-1202861239/

If you are interested, you can see a trailer of the series here: www.hbo.com/the-righteous-gemstones

I do not have access to HBO, and even if I did, I would not be keen on watching the show. As I said, my initial reaction was to see this as just one more nasty attack on Christianity, one more misrepresentation of the faith, and one more hatchet job from the secular left sleazeballs who inhabit Hollywood.

And all that is perfectly true: there are countless folks in the entertainment industry who seem to hate Christianity and who will do anything they can to mock the faith, deride the faith, criticise the faith, and marginalise the faith. What else do we expect from all the immoral god-haters out there?

But as I also said (and as is implied in my title), the mockery of the faith can come not just from its enemies. Too often those within the faith can do a great job of mocking the faith by misrepresenting it and abusing it in all sorts of ways. Far too often Christians bring shame upon themselves and their faith by deviating from what God would have us to be and to do.

Church history is loaded with cases of Christians undermining their own faith as they engage in compromise, carnality, and the flesh. And those who are simply seeking to make a quick buck off the faith are clear examples of this. Sadly there have been far too many folks doing this over the years.

One of the most appalling aberrations of the Christian faith, and one of the most despicable distortions of basic Christian beliefs, is the American-based prosperity gospel, or the health and wealth gospel. So inimical is this to the true gospel that I have now penned 82 articles on this: billmuehlenberg.com/category/theology/the-health-and-wealth-gospel/

Just yesterday I wrote a review of a new book from someone who was deeply involved in all this. Costi Hinn, nephew of the famous televangelist Benny Hinn, has made a clean break from this teaching, and is now warning others to stay clear of it. My review of this very important book is found here: billmuehlenberg.com/2019/08/24/god-greed-and-the-prosperity-gospel-by-costi-hinn/

Let me offer one more quote from the volume: “There are millions of people who need to be saved from the prosperity gospel deception like I was. I’m trying to reach them, while at the same time inspiring other people to reach them too. I want people to see that the prosperity gospel is damning and abusive. It exploits the poor and ruins the lives of some of the world’s most vulnerable people.”

Yes it is a fleshly, man-made gospel which is causing untold damage, not just to countless individuals, but to the name of Christ and to Christianity itself. No wonder we have television shows like “The Righteous Gemstones.” They don’t really need to make things up – they can just run with what they find in too many of our churches today.

That Hollywood and the secular elite have long gone after Christianity is of course not surprising. One thinks of so many other examples of the faith being bagged and Christianity being mocked. Let me mention just one famous example. Back in 1926 Sinclair Lewis wrote the satirical novel, Elmer Gantry. One writeup of the book says this:

Lewis researched the novel by observing the work of various preachers in Kansas City in his so-called “Sunday School” meetings on Wednesdays. . . . The character of Sharon Falconer was loosely based on events in the career of the Canadian-born American radio evangelist Aimee Semple McPherson, who founded the Pentecostal Christian denomination known as the International Church of the Foursquare Gospel in 1927. . . . On publication in 1927, Elmer Gantry created a public furor. The book was banned in Boston and other cities and denounced from pulpits across the United States. One cleric suggested that Lewis should be imprisoned for five years, and there were also threats of physical violence against the author. Evangelist Billy Sunday called Lewis “Satan’s cohort”. Elmer Gantry ranked as the number one fiction bestseller of 1927, according to “Publisher’s Weekly”.

Wow, times have certainly changed. This scathing attack on the faith was later turned into a major Hollywood movie in 1960. This is one description of the film version:

When hedonistic but charming con man Elmer Gantry (Burt Lancaster) meets the beautiful Sister Sharon Falconer (Jean Simmons), a roadside revivalist, he feigns piousness to join her act as a passionate preacher. The two make a successful onstage pair, and their chemistry extends to romance. Both the show and their relationship are threatened, however, when one of Gantry’s ex-lovers (Shirley Jones) decides that she has a score to settle with the charismatic performer.

Plenty of other books, films, plays and television shows could be mentioned here. There is never a shortage of anti-Christian bigotry found out there. Often they are just ugly attacks by angry misotheists who can’t stand Christianity. But at other times it is well-deserved criticism – criticism that we Christians should be making.

While God will one day judge all these haters of the faith who delight in poking fun at Christianity while so often misrepresenting it, there will also be more judgment from God coming – on his own people. It would be a lot harder for critics to write these books and for Hollywood to make such films if there was not so much corruption and distortion within the church of Jesus Christ.

Sadly too many Christians have done a terrific job of mocking and marginalising their own faith. They simply provide all the fodder needed for secular critics to also keep up the mockery as they attack a faith that bears so little likeness to Jesus Christ and the biblical gospel.

The Bible makes it clear that judgment must first begin with the household of God (1 Peter 4:17). If we had been carefully judging ourselves all along, demanding our leaders and churches keep on the straight and narrow of biblical truth, we would have had fewer of these hostile secular critics – or at least they would have had a lot less material to work with.

It is always a bad thing to see the world making a mockery of Christ and Christianity. But when Christians are bringing this mockery upon themselves, then that is really bad. They need to repent, and they need to stop giving the enemy more ground to attack the faith from.

12 Replies to “Making a Mockery of the Faith”