A new book written by Benny Hinn’s nephew on the prosperity gospel is a must read.

Most folks have heard of Benny Hinn, the famous and flamboyant American televangelist. Fewer people have heard of his nephew Costi. He was the heir apparent of the mega-rich mega-ministry. Prophecies were given to him that he would even surpass all that had gone before, with the family name getting even greater. But that did not eventuate.

This book is both a biography of Costi as well as a critique of the prosperity gospel. It offers the story of how someone fully involved in the prosperity gospel eventually made a radical about-turn, and is now warning about the many dangers and downsides of this very American sort of teaching. 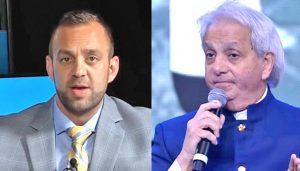 The story starts by telling how his Greek Orthodox family left the Middle-East and settled in Canada in 1968. Within a few years his uncle became attracted to faith healers such as Kathryn Kuhlman and Oral Roberts, viewing that sort of ministry as his new direction in life.

He moved to America and set up the Orlando Christian Center in 1983. Benny’s brothers soon became involved, including Costi’s father. A new church was planted in Vancouver in 1987. Quickly the Hinns were becoming a massively big name in the Pentecostal and charismatic circles in North America. Costi soon became a part of it. “It was life in the fast lane of the prosperity gospel.”

Benny taught that those who wanted a miracle needed to give money. That was the simple, magic formula. And it sure worked for him, since by “1999, Benny Hinn was the most famous and controversial prosperity preacher and faith teacher in the world.”

And as part of all this, Costi was certainly living the good life, with nothing but the best. Talk about lifestyles of the rich and famous: he had it all. For two years as a young man he travelled with his dad and his uncle in the ministry. He provides a sample listing of the sorts of things he was used to as he was involved in this work:

The two houses his parents lived in were worth $5 million while his uncle’s California ocean-view mansion was worth over $8 million. And all “this was paid for by donations from desperate people who believed that giving a prosperity preacher their money would result in their living this lifestyle too.” It was not just Westerners giving all this money – the same pressure was applied to the poor in places like India:

Much like a non-profit company will have a donor relations specialist who works to create a network of supporters for a good cause, the prosperity gospel uses its network of money men (and women) to increase offerings… It’s no wonder the prosperity gospel is such a hustle – the salaries we made were enormous. It wasn’t uncommon for my father to make thirty-five thousand dollars on a single trip.

As mentioned, all this could have been his for the rest of his life – no questions asked. And of course any questions or doubts about the ministry were seen as Satanic attacks and cases of ‘touching the Lord’s anointed.’ But he was having these doubts anyway. The lavish money issue was one thing (but this was explained as being God’s blessing on God’s anointed servants).

The healings were also something he started to question. Why were only some people being healed? And often the crowds were told that everyone would be healed if they gave, while clearly they were not. His fiancé had asthma, and then his mother got a tumour. But the Hinns were not supposed to get sick.

After four years of denial and avoidance and praying and rebuking the devil, his mother finally did find healing – but by going to a hospital and having surgery! The Hinns had avoided such places as they were where the ‘spirits of infirmity and death’ resided.

Then there was the issue of various false prophecies being made by his uncle. And having a girlfriend who did not fully share the prosperity vision also made him question things more and more, as did a stint in Bible college. All these things caused a major turnaround in his thinking.

He not only learned about people who were NOT healed such as Joni Eareckson Tada, but he discovered a whole new world of past saints like Tyndale and Luther and Hudson Taylor and Spurgeon and Ryle. For the first time ever, he started reading important preachers and theologians like Lloyd-Jones and F. F. Bruce and Geisler and Sproul, and he even read biblical commentaries as well.

Over time he recognised how wrong his former beliefs had been, and he even went to an evangelical seminary for more training for his work as a pastor. When he had the story of his changed theology printed in Christianity Today in 2017, he started hearing from many people the world over who were harmed and ruined by the prosperity gospel in general and his uncle in particular.

He calls the prosperity gospel a “disease” but also warns against the “poverty gospel” which equates godliness with how poor and miserable you are. He argues for a biblical balance here. He also still believes that God can heal, but on his terms, not ours.

Australians can buy the book at Koorong: www.koorong.com/search/product/god-greed-and-the-gospel-how-truth-overwhelmed/9780310355274.jhtml

22 Replies to “A Review of God, Greed, and the (Prosperity) Gospel. By Costi Hinn.”