These books on mighty heaven-sent revival are must reads.

All true Christians long for revival, pray for revival, and love to hear or read about revival. Indeed, studying periods of mighty revival in history is always a rewarding endeavor. It cannot help but bless and encourage you, and spur you on to pray even more for heaven-sent revival.

One nation that has known a tremendous amount of revival, especially over the past 600 years, is Scotland. While I do not claim to be an expert on Scotland, or revival, or church history, with the help of a recent multi-volume work, I do know at least something about these issues – and so can you.

I refer to the superb new series on Scottish revivals by a historian from there, Tom Lennie. Three of his volumes are now available and they are all quite comprehensive, detailed, and stirring accounts of a half millennia of revivals in Scotland. They are: 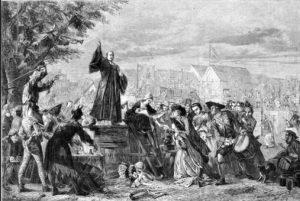 All up we will have some 2000 pages on these glorious moves of God in Scotland since the time of the Reformation. It is of course rather hard to do justice to so much material in such a short article as this. But let me try to give you a feel for these works. Let me simply offer some highlights – first in more general terms, and then in more specific ways.

Lennie opens his 2009 volume with these words: “Scotland arguably has the richest heritage of evangelical revivals of any nation in the world.” He acknowledges that Wales has been called ‘The Land of Revivals,’ but he goes on to say: “However, the contention reached from my own extensive studies is that no nation on earth has a more varied, colourful or longstanding heritage of evangelical awakenings than Scotland.”

In Land of Many Revivals he has a helpful four-page Afterword in which he lists various aspects of revival. For example, they generally commence during times of spiritual declension; there is a strong emphasis on Christ-centred preaching and the authority of God’s Word; deep conviction of sin and genuine repentance are the norm; and there is a marked change in lifestyles.

Moreover, they are “unpredictable, messy affairs” that can last for a few days or a number of years; opposition from both within and without the churches can be fully expected; and prayer before and during a revival is always a staple feature, although it “is impossible to prove or disprove outright any precise cause and effect pattern” between prayer and revival.

A much more detailed 42-page version of this is found in his 2009 book. As to “instruments of revival” he says this: “Revivals are invariably accompanied by preaching that is uncompromising, Christ-centred and demanding of personal commitment. Scottish church history is adorned more than that of virtually any other nation with eminent preachers whose names are still renowned.” These include men like John Knox, James Haldane, Alexander Burns, Thomas Chalmers and Robert Murray McCheyne.

Let me discuss one more matter from this section. Says Lennie: “One recurring feature of revival movements is a deep awareness of the nearness of the divine. Sometimes, not just the church, but the whole community becomes God-conscious. Duncan Campbell claimed: ‘Revival is neither more nor less than the impact of the personality of Jesus Christ upon a life or upon a community’.”

In Scotland Ablaze he provides a 20-page appraisal of the 1859 Revival. Let me offer a few snippets of his writings on this: “The revival of 1859 and the 60s was very widespread, constituting the most extensive evangelical revival in Scotland’s history. Its influence extended to every one of the nation’s counties.” He disputes the figures of revival expert J. Edwin Orr who said there were 300,000 revival converts out of the nation’s 3 million people at the time. But, says Lennie, the figure did run “into at least numerous tens of thousands.”

And this had an impact on entire communities. Police reports saw a major reduction in crime because of the revival. For example, in 1859 convictions for drunkenness were nearly 5000. Over the next five years the numbers steadily declined, with just over 2000 in 1864 – all up, 55 per cent less. Moreover, in Portgordon there were drinking establishments doing good business prior to 1860. But by 1875 every one of them had shut down.

Speaking of Portgordon, let me share two further incidents from this volume, this time from revivals in the early 1870s:

One story involved an entire crew of reprobate fishermen who had entered a local bar one day to get drunk. The barmaid pointed to a cask of whisky, newly delivered, but unopened, because she had lost all her patrons owing to the revival. Somewhat taken aback, the captain at length declared that since everyone else was caught up with their spiritual condition it was time he was too, and he got up to leave the pub, the rest of the crew following obediently behind him. . . . [They] began attending the meetings and all ‘gave their lives to the Lord’, in which faith they joyously continued as sanctified and sober men.

It was around this time that a young boy commenced meetings for his own group of peers. These were greatly blessed, as many as six boys being brought to the Lord in one meeting. A nine-year-old girl called Susan began to meet with these young ones and soon also came to a place of spiritual rest. When she later hurt her leg and had to be pushed around in a perambulator, Susan remained an active evangelist, reproving sin or speaking words of encouragement to all she met. Her illness increasing, Susan was confined to bed. But this failed to restrict her labours, for she asked to be carried to the garret meetings, where she openly pled with God to bless those in attendance, and with such assurance of faith that ‘often the meeting was brought to groan with uncontrollable emotion, so near did this little one, by her pleadings, bring them to the source of love and light’.

Let me offer a few more specifics. In his 2015 book he discusses the Cambuslang Revival:

On Thursday, 18th February 1742, ‘the church was filled with the sound of weeping . . . that night the manse was crowded with about fifty “wounded” souls’. The Cambuslang revival had begun, and McCulloch was compelled to institute services on an almost daily basis for over six months. By May over 300 had been awakened, and as many as 9,000-10,000 were turning up for Sabbath services. During public addresses some clapped their hands or broke into cries…

Consider also the amazing work of Whitefield – this from his time in Edinburgh:

English American preacher, George Whitefield (1714-1770) paid a thirteen-week visit to Scotland in the summer of 1741 – the first of a remarkable fourteen journeys he was to make north of the border. . . . On 24th September, Whitefield wrote, ‘On Thursday morning I preached to the children of the city with a congregation of near twenty thousand in the park. It is remarkable that many children are under convictions, and everywhere great power and apparent success attend the word preached.

The following July, when Whitefield was just 27, he preached at Cambuslang: “Between 20,000 and 35,000 people were gathered, and Whitefield witnessed scenes of which he had never before seen the like. ‘The motion passed swift as lightening from one end of the audience to the other’, he wrote. ‘You might have seen thousands bathed in tears, some wringing their hands, some almost swooning, and others crying out and mourning over a pierced Saviour’.”

Everywhere the revival took hold, a striking yearning for the Word of God could be found, while in the country converts seized every opportunity for humble, earnest, united prayer, especially at mealtimes. Prayer meetings in Lorne Street Church rose from ninety to over 200 while the Christian Endeavour group more than trebled in size. There was a zealous desire to witness for Christ and even children were known to have led their parents to the Lord. A young carpenter could be seen night after night leading his fellow workers into the inquiry room, while one licentious miner who was recently converted was the means of saving change in the life of his dying father.

Consider some details from what he says about the Fishermen’s Revival of 1919-1923: “Amazingly, out of a population of 1,500, it was estimated that around 600 professions of faith were recorded in a fortnight.” And one minister who stressed the imminent return of Christ had quite an impact as Lennie states:

Clarke urged his listeners at every opportunity to turn their backs on things of this world, as nothing could be held on to but their souls. A number of villagers made active disposal of dubious possessions by holding a bonfire on 17 December 1921, on which they burned cigarettes, pipes, tobacco, playing cards, dancing shoes and children’s board games such as ludo and tiddley-winks, then knelt around the fire singing and praying.

And given that so much of Australia is right now in the midst of footy finals fever, what he says next I find quite interesting – and amusing: “Some locals lamented that even highly popular pastimes such as football and golf were ‘having to take a back seat’, as players and supporters abandoned these activities in favour of revival meetings. A reporter for the Fraserburgh Herald wrote that the Inverallochy Golf Club was a ‘flourishing body till this upheaval made itself felt’.”

Imagine the Melbourne Cricket Ground today half empty because of revivals sweeping Melbourne and beyond! Or, better yet, imagine the MCG full of worshipping Christians because of God’s sovereign movement in Australia. (And recall that in 1959 American evangelist Billy Graham did fill the MCG with its biggest crowd ever: 143,750 people.)

Of course I could go on and on with specific examples of amazing divine breakthroughs in these revivals with lives changed and entire communities transformed. Such is the work of genuine revivals. And all this is from just one nation over a 500- to 600-year period.

God has certainly been at work, and all believers should fervently seek and pray for more of the same today. All Christians will be blessed as they study the history of revival, and these three volumes are an excellent place to begin.

(Australians can find these books at Koorong: www.koorong.com/search/results.jhtml?w=tom%20lennie&af=&isort=&keywords=tom%20lennie )

5 Replies to “Revival in Scotland”