The true Christian WILL face persecution for sharing the gospel. Consider these three amazing examples.

Scripture offers us various ways to help us know if we really are God’s blood-bought children. There are various tests, if you will, or things to look for which can help indicate a genuine biblical faith. One such measure of really being in the faith may not be liked or spoken of very much, but it is certainly biblical.

I refer to the issue of persecution. You may not like to think about this as being an indication of true faith, but throughout the New Testament we are told in no uncertain terms that persecution is the hallmark of the follower of Jesus Christ. 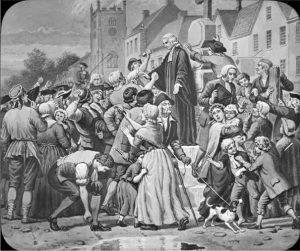 The servant is not above his master, and what happened to Jesus will happen to his followers. Both Jesus and the writers of the New Testament made this perfectly clear. Let me provide just a few passages on this:

-Matthew 5:10 Blessed are those who are persecuted because of righteousness, for theirs is the kingdom of heaven.
-Matthew 10:22-23 You will be hated by everyone because of me, but the one who stands firm to the end will be saved. When you are persecuted in one place, flee to another.
-Matthew 24:9 Then you will be handed over to be persecuted and put to death, and you will be hated by all nations because of me.
-Luke 6:22-23 Blessed are you when people hate you, when they exclude you and insult you and reject your name as evil, because of the Son of Man. Rejoice in that day and leap for joy, because great is your reward in heaven. For that is how their ancestors treated the prophets.
-Luke 21:16-17 You will be betrayed even by parents, brothers and sisters, relatives and friends, and they will put some of you to death. Everyone will hate you because of me.
-John 15:18-20 If the world hates you, keep in mind that it hated me first. If you belonged to the world, it would love you as its own. As it is, you do not belong to the world, but I have chosen you out of the world. That is why the world hates you. Remember what I told you: ‘A servant is not greater than his master.’ If they persecuted me, they will persecute you also. If they obeyed my teaching, they will obey yours also.
-John 16:2-4 They will put you out of the synagogue; in fact, a time is coming when anyone who kills you will think he is offering a service to God. They will do such things because they have not known the Father or me. I have told you this, so that when the time comes you will remember that I warned you.
-2 Corinthians 4:8-10 We are hard pressed on every side, but not crushed; perplexed, but not in despair; persecuted, but not abandoned; struck down, but not destroyed. We always carry around in our body the death of Jesus, so that the life of Jesus may also be revealed in our body.
-1 Thessalonians 3:3-4 We sent Timothy, who is our brother and co-worker in God’s service in spreading the gospel of Christ, to strengthen and encourage you in your faith, so that no one would be unsettled by these trials. For you know quite well that we are destined for them. In fact, when we were with you, we kept telling you that we would be persecuted. And it turned out that way, as you well know.
-2 Timothy 3:12 In fact, everyone who wants to live a godly life in Christ Jesus will be persecuted.

Persecution was clearly promised to us – so are you claiming every promise of God right now! Or are you selective in which promises you want to latch on to? And church history is filled with countless examples of such persecution. Entire books have been penned on this, including older classics such as Foxes Book of Martyrs (first penned in 1563).

Here I want to briefly look at three famous evangelists and preachers who knew all about opposition, persecution and entrenched enmity. For daring to share the gospel in public, they all encountered plenty of diabolical resistance, hatred and fury.

My first two examples were colleagues and co-founders of the Methodist movement. While they had different theological perspectives, they both had a deep-seated passion to proclaim the gospel, and to go anywhere and everywhere to do that. And both met plenty of resistance and persecution.

Wesley (1703-1791) was quite meticulous in keeping diaries of his life and work, and we have plenty of versions of his journals to choose from. Here I will simply utilise one quite short version, The Heart of John Wesley’s Journal – selected and edited by Percy Livingston Parker (Hendrickson, 2014).

In going through his journals, one notes how very often opposition and persecution arose. Let me offer just a few brief titbits, along with the general dates of when these incidents occurred:

April 1740 – Several or other of the children of Belial had labored to disturb us several nights before: but now it seemed as if all the host of the aliens had come together with one consent. Not only the court and the alleys, but all the street, upwards and downwards, was filled with people, shouting, cursing and swearing, and ready to swallow the ground with fierceness and rage. . . . As I returned home in the evening, I had no sooner stepped out of the coach than the mob, who were gathered in great numbers about my door, quite closed me in.

January 1742 – While I was explaining at Long lane, “He that committeth sin is of the devil” [I John 3:8], his servants were above measure enraged: they not only made all possible noise (although, as I had desired before, no man stirred from his place or answered them a word); but violently thrust many persons to and fro, struck others, and broke down part of the house. At length they began throwing large stones upon the house, which, forcing their way wherever they came, fell down, together with the tiles, among the people, so that they were in danger of their lives.

March 1742 – I had no sooner begun than a great company of rabble, hired (as we afterwards found) for that purpose, came furiously upon us, bringing a bull, which they had been baiting, and now strove to drive in among the people.

October 1743 – Two years ago a piece of brick grazed my shoulders. It was a year after that the stone struck me between the eyes. Last month I received one blow, and this evening two, one before we came into the town, and one after we were gone out; but both were as nothing: for though one man struck me on the breast with all his might, and the other on the mouth with such force that the blood gushed out immediately, I felt no more pain from either of the blows than if they had touched me with a straw.

September 1775 – I came to Leeds, preached at five, and at eight met the society; after which the mob pelted us with dirt and stones a great part of the way home. The congregation was much larger next evening; and so was the mob at our return, and likewise in higher spirits, being ready to knock out all our brains…

February 1748 – After preaching at Oakhill about noon, I rode on to Shepton, and found them all under a strange consternation. A mob, they said, was hired, prepared, and made sufficiently drunk, in order to do all manner of mischief. . . . After we were gone into the house, they began throwing great stones, in order to break the door; but perceiving this would require some time, they dropped that design for the present. They first broke all the tiles on the penthouse over the door, and then poured in a shower of stones at the windows. One of their Captains in his great zeal, had followed us into the house, and was now shut in with us. He did not like this, and would fain have got out; but it was not possible. So he kept as close to me as he could, thinking himself safe when he was near me: but staying a little behind – when I went up two pair of stairs, and stood close on one side, where we were a little sheltered – a large stone struck him on the forehead, and the blood spouted out like a stream. He cried out, “O Sir, are we to die tonight? What must I do? What must I do?” I said, “Pray to God. He is able to deliver you from all danger.” He took my advice, and began praying in such a manner as he had scarce done ever since he was born.

These are just a few of so many such accounts of opposition, persecution, and demonic rejection of the gospel. I encourage you to get a version of his journals and read for yourself what a dedicated and determined life of commitment to Christ and the gospel really looks like.

In Part 2 of this article I will look at the lives of George Whitefield, and William and Catherine Booth: billmuehlenberg.com/2019/09/22/are-you-being-persecuted-yet-part-2/

3 Replies to “Are You Being Persecuted Yet? Part 1”