The true Christian WILL face persecution for sharing the gospel. Consider these three amazing examples.

In Part 1 of this article I said that persecution is a good indication of whether you are a committed Christian or not. It is a good test of determining if you really are following Christ fully and faithfully. Sure, some care is needed here: sometimes we are disliked, opposed and persecuted – NOT because we are terrific followers of Jesus Christ – but because we may be jerks, or a pain in the butt, or just annoying to be around.

But that is not what I am speaking about here. What I mean is that those who are real deal followers of Christ, and who boldly proclaim biblical truth, will be persecuted. Jesus made this perfectly clear, as did his disciples. And church history fully attests to this.

In Part 1 of this article I examined the life of John Wesley, offering just a few – of many – examples of the fierce and abusive opposition he faced on a regular basis. Let me now offer my next two examples of this. 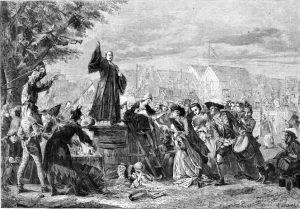 The great preacher Whitefield (1714-1770) also knew his fair share of opposition and hostility. Here I will utilise the 2-volume biography by Arnold Dallimore (Banner of Truth, 1970, 1980) as I offer just a few examples of the vile abuse he often encountered.

In early 1742, while doing open-air preaching at Moorfields, London, he tells us the response he received by some of the “twenty or thirty thousand people” assembled there: “I was honoured with having a few stones, dirt, rotten eggs and pieces of dead cats thrown at me.” He continues:

Finding those efforts to fail, a large body . . . assembled together, and having got a large pole for their standard, advanced towards us with steady and formidable steps, till they came very near the skirts of our hearing, praying, and almost undaunted congregation. I saw, gave warning, and prayed . . . for present support and deliverance. . . . Just as they approached us with looks full of resentment, I know not by what accident, they quarrelled among themselves, threw down their staff and went their way.

He reports this incident from the next day:

But Satan did not like thus to be attacked in his strong-holds, and I narrowly escaped with my life: for as I was passing from the pulpit to the coach, I felt my wig and hat to be almost off. I turned about, and observed a sword just touching my temples.

A young rake . . . was determined to stab me, but a gentleman, seeing the sword thrusting near me, struck it up with his cane . . . The enraged multitude soon seized him, and had it not been for one of my friends, who received him into his house, he must have undergone a severe discipline.

The next day, I renewed my attack in Moorfields; . . . After they found that pelting, noise, and threatenings would not do, one of the merry Andrews got up into a tree very near the pulpit, and shamefully exposed his nakedness. . . Such a beastly action quite abashed the serious part of my auditory; whilst hundreds of another stamp . . . expressed their approbation by repeated laughs. I must own that, at first, it gave me a shock. . . but, recovering my spirits, I appealed to all, since they had now such a spectacle before them, whether I had wronged human nature, in saying, after pious Bishop Hall, “that man, when left to himself, was half a devil and half a beast; . . .”

Consider another incident from 1744 in which two attackers nearly killed him:

One night, shortly after his arrival in Plymouth, an officer from a man-of war came to his lodging, seeking an interview. Whitefield was in bed, but believing the man to be a spiritual inquirer he had the landlady show him up to his room.

The conversation had but well begun when – and here is Whitefield’s account:

‘. . . he suddenly rose up, uttering the most abusive language; calling me dog, rogue, villain, &cc, and beat me most unmercifully with his gold-headed cane. . . . But my hostess and her daughter hearing me cry murder, rushed into the room, and seized him by the collar; however, he immediately disengaged himself from them, and repeated his blows upon me.’

A second attacker also appeared, but before lasting harm was done the noise of the assault aroused the people in homes around about and the assailants fled. It is probable that, as Whitefield believed, these men intended to murder him.

The Booths and the Salvation Army

William and Catherine Booth also encountered constant opposition and persecution, as did so many members of the newly-formed Salvation Army. Talk about persecution, these folks certainly experienced it big time. Because they fearlessly proclaimed the biblical gospel with Holy Ghost boldness, they were met with fury, hostility and determined opposition.

William and his helpers soon got used to the disruptions caused by drunken roughs during their open-air meetings. . . . They did not always come away from their open-air work unharmed. Anything opponents could find was thrown their way, and often they hit the mark. On many evenings, William would trudge the eight miles to his Hammersmith home, arriving weary and battle-scarred, his clothes stained with blood or rotten fruit and his body bruised. This was the price they had to pay as they sought to save the worst of sinners – a price they never considered too high….

Just as they were willing to weather the storms of unfavorable public opinion, the early Salvationists were prepared to bear any cost to see salvation come to ordinary men and women like themselves. However, as the work of the Army expanded, the disruptions and attacks against them began to take on a more serious and sinister form. Their willingness to pay the price was regularly tested to the limit. . . . Preaching on the streets was at times like preaching in hell. Teams of Salvationists faced ridicule, scorn, and hatred as they proclaimed the gospel in the degraded slums. Many of the poor and destitute were strongly atheistic, hating the name of God and fiercely opposing those who spoke of any form of religion….

By 1880 this holy Army was attracting severe opposition. Those who stood to lose the most from their success became their greatest enemies. Hotel and brothel owners faced falling profits as their previously thriving businesses began to suffer. The escalating conversion rate of many of their most loyal customers was plainly evident….

Tragically greater injuries were also to follow. In Guildford that same year the wife of the corps officer was kicked to death. A fellow woman soldier was so severely beaten during the same parade that she also died some days later from the wounds she sustained. It is difficult to imagine this degree of persecution of Christians occurring in a ‘Christian’ nation such as Britain in the nineteenth century.

In Whitechapel, East London, Salvation Army lasses were tied together with rope and pelted with live coals. It was not uncommon for parades heading for the evening meetings to be showered with tar and burning sulphur. ‘Blood and Fire’ became a reality for this army of God, unfortunately not only in the way originally foreseen.

I could go on and on like this, but I trust that you get the point. Bold preaching of the gospel will always invite determined and fierce opposition. Real persecution will always follow the faithful proclamation of the good news of salvation in Christ. This is one clear test of genuine Christian discipleship.

Yes, not all of us are street preachers or open-air campaigners. Not all of us have such ministries as these three incredible examples. But every follower of Jesus Christ is called to be a witness. We are all called to tell others about Jesus Christ. And when we do that, we can expect resentment, animosity, rejection and persecution.

Sure, in the civilised West we may not necessarily face the same persecution that these great saints did. We may not encounter screaming and enraged mobs, ready to kill us or stone us or run us out of town. But the hostility and persecution can be just as significant and painful, with people losing their jobs, being fined, and sometimes even jailed.

So we dare not expect that as committed disciples of Christ we can somehow escape persecution and hatred. Let me close with some stirring words by Catherine Booth as found in her 1880 book, Aggressive Christianity:

Opposition! It is a bad sign for the Christianity of this day that it provokes so little opposition. If there were no other evidence of it being wrong, I should know from that. When the Church and the world can jog along together comfortably, you may be sure there is something wrong. The world has not altered. Its spirit is exactly the same as it ever was, and if Christians were equally faithful and devoted to the Lord, and separated from the world, living so that their lives were a reproof to all ungodliness, the world would hate them as much as it ever did. It is the Church that has altered, not the world….

I often wonder whether there would be any martyrs now. Sometimes I think that the greatest boon to the Church of Christ would be a time of persecution. I believe it would. I believe it would drive us up to God and each other. We should find out, then, whether we were willing to forsake all to follow Him. You know that if the martyrs had taken the standard of religious life that exists now, they would never have been martyrs. They would have looked after their own skins, and left the Lord to look after the Gospel.

Part 1 of this article is found here: billmuehlenberg.com/2019/09/22/are-you-being-persecuted-yet-part-1/

7 Replies to “Are You Being Persecuted Yet? Part 2”