This new book on the great Athanasius is a must read.

Except for keen theologians and hardcore theology buffs, it is unlikely that many would have heard of the Latin phrase, “Athanasius contra mundum” (Athanasius against the world). All Christians should be aware of this however, since the sort of Christianity that we now know and experience would likely be far different if it were not for this great figure in ecclesiastical history.

The vitally crucial church father Athanasius (c. 298-373), was a pillar of theological orthodoxy when all around him damaging heterodoxy and heresy were being promoted. Had he failed in upholding basic biblical Christology, things would be far different today, 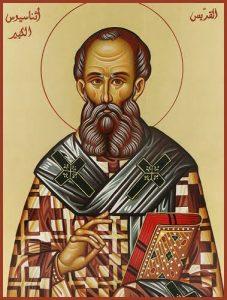 Much has been written about this important figure, including the somewhat recent work by Peter Leithart, Athanasius (Baker, 2011). In this brand-new volume, the Sydney Presbyterian minister and church historian Peter Barnes offers us a very accessible and useful look at the man and his mission.

Although brief (170 pages) it is packed full of detailed and well-referenced information about his life and thought, and why he is such an exceedingly invaluable figure. Of course a major contribution of his was to uphold the biblical understanding of the full, eternal deity of Christ against Arius and the Arians.

The first two-thirds of the book looks at historical and theological aspects of this longstanding battle over the Arian controversy. Briefly put, the outline of this goes as follows: In 306 Constantine became the emperor, and in 312 he converted (in one sense or another) to Christianity.

Soon thereafter the Arian conflict broke out. Arius (260–336), the Alexandrian presbyter, had argued that Jesus was not the eternal Son of God, co-equal to the Father, but was a created being, the highest of the angels. It was this teaching that Athanasius resisted throughout his life.

Disliking theological divisions, Constantine called a major church council in Nicea in 325 to deal with the matter. After several months of discussion, the full deity of Christ was upheld, and Arias and others were excommunicated, and later exiled. That should have been the end of the matter, but sadly it most certainly was not.

Arianism made a quick comeback, and a major war over this matter went on over the next half century. Often the Arians had the upper hand – so much so that for his beliefs, Athanasius was himself exiled, not once, but five times altogether.

All up he was away for some seventeen years during these periods of exile. But so vital was this matter that he persevered, with numerous councils being held over this period. Thanks in large measure to his hard work, orthodoxy slowly emerged victorious. Indeed, eight years after he died the Council of Constantinople in 381 upheld and reaffirmed the orthodox Nicene position.

I speak further to the importance of all this in an earlier article that I wrote on Athanasius: billmuehlenberg.com/2012/12/30/athanasius-contra-mundum/

But in this new book we obviously get much more detail and understanding of just what was involved in fighting for the orthodox teaching about Christ, and how very costly it was for Athanasius. For such a long period of time it certainly was the case of Athanasius contra mundum.

The final third of this volume looks at other theological, pastoral and ecclesiastical aspects of Athanasius. It discusses his other important contributions, including his various works of continuing theological importance, such as his On the Incarnation of the Word of God.

Speaking of this work, Barnes notes: “True to Scripture, Athanasius was convinced that only the creator can be the redeemer. The creation cannot produce its own saviour and redeemer. . . . To Athanasius, as to the Bible, the author of creation is also the author of re-creation. Even when some of his detailed exegesis seems less than convincing, this big picture – the metanarrative of creation, fall, and redemption – faithfully reproduces the message of the Bible.”

Not that one will agree with everything that the great Bishop wrote: “Not all that Athanasius said on the atonement can be regarded as adequate and not all of his views on monastic asceticism can be endorsed, but his achievements are worthy of appreciation.”

In the final chapter of his book Barnes offers an assessment of this great figure of the early church. He cites a number of authorities who offer both positive and negative opinions of the man, and then he concludes this way:

As G. L. Prestige notes: ‘Single-hearted and sometimes almost single-handed, he had saved the Church from capture by pagan intellectualism … By his tenacity and vision in preaching one God and Saviour, he had preserved from dissolution the unity and integrity of the Christian faith.’ John Behr also states: ‘Nicene Christianity exists by virtue of his constancy and vision.’ C. S. Lewis agreed: ‘It is his glory that he did not move with the times; it is his reward that he now remains when those times, as all times do, have moved away.’ Which is why, in both his life and his teaching, Athanasius is worthy of study today….

In Athanasius there was an admirable combination of theological clarity and firmness of resolve, a commitment to truth without blinkered fanaticism, an asceticism which yet remained in the world, and a pastoral heart without any tendency to sentimentality.

All believers should – at the very least – be acquainted with this monumental figure of church history. And this new book offers us an excellent means of doing just that.

(Australian readers can find this volume at Koorong: www.koorong.com/product/athanasius-of-alexandria-his-life-and-impact-early-church_9781527103924 )

6 Replies to “A Review of Athanasius of Alexandria: His Life and Impact. By Peter Barnes.”