Now religious left loonies are confessing their sins – to plants! I kid you not.

There is never a shortage of nutjobs amongst us, and religious nutjobs can be the worst of the bunch. I deal with them all the time. In fact – and I kid you not – I recently started saving actual examples of this, simply from people who send in whacko comments to my website. 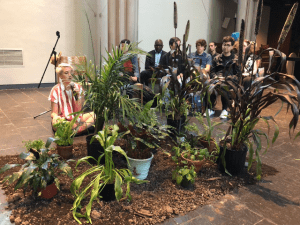 I have long been saving the hate comments that come my way, but of late it has seemed that it is also worth saving some of these quite goofy comments. And wow, there sure are some real winners out there. One guy for example basically insisted that only he and his pet Chihuahua were going to make it to heaven: “My first rapture dream 123 people out of the entire country USA were eligible for heaven. The most recent dream only 1,2, or 3 people out of the entire world eligible for heaven.”

Oh dear! I get the same on the social media, where one can find fruit loops galore running amok. I often have to draw the line with some of these folks, saying enough is enough. I had to let go of another one of these guys just last night. There are so very many idiotic conspiracy theories and just plain moonbat things some believers will hold to.

But it is not just the nutter fightin’ fundies who can come up with such moronic and idiotic stuff. The religious left in general, and progressive Christianity in particular, are up to their ears in all this as well. By way of background, see this article for more on these folks: billmuehlenberg.com/2011/01/23/progressive-christianity/

And one of the most bizarre examples of this has just made the headlines. A liberal theological seminary in the US now has staff and students confessing their sins – not to God, but to chrysanthemums, tree ferns and assorted cacti – really! Forget about repenting over things like abortion or adultery – something much more important is being run with here. Says one article:

Students at Union Theological Seminary prayed to a display of plants set up in the chapel of the school, prompting the institution to issue a statement explaining the practice as many on social media mocked them.

“Today in chapel, we confessed to plants,” the nation’s oldest independent seminary declared Tuesday on Twitter. “Together, we held our grief, joy, regret, hope, guilt and sorrow in prayer; offering them to the beings who sustain us but whose gift we too often fail to honor. What do you confess to the plants in your life?”

Thankfully they did indeed get plenty of critics absolutely amazed at this lunacy. As one said, “This is utter nonsense. Absolute theological bankruptcy in every way. Your Seminary is a cemetery.” Yes quite so. But the school dug in its heels and said this:

We’ve had many questions about yesterday’s chapel. In worship, our community confessed the harm we’ve done to plants, speaking directly in repentance. This is a beautiful ritual. We are in the throes of a climate emergency, a crisis created by humanity’s arrogance, our disregard for Creation. Far too often, we see the natural world only as resources to be extracted for our use, not divinely created in their own right—worthy of honor, thanks and care. We need to unlearn habits of sin and death. And part of that work must be building new bridges to the natural world. And that means creating new spiritual and intellectual frameworks by which we understand and relate to the plants and animals with whom we share the planet. www.washingtonexaminer.com/news/absolute-theological-bankruptcy-union-theological-seminary-students-pray-to-plants

Good grief. Um, rocks, dirt, cockroaches, mosquitoes and leeches are also part of divine creation, but I sure ain’t gonna confess my sins to them, asking them for forgiveness! Give me a break! This is just what we find Paul warning about in Romans 1:25: “They exchanged the truth about God for a lie, and worshiped and served created things rather than the Creator—who is forever praised. Amen.”

It is not just overseas that we find the religious left worshipping at the altar of climate change. In Australia we have it happening as well. As I speak, another climate change protest is under way, and plenty of leftist religious groups are hopping on the bandwagon. Consider but one example:

Jesuit Social Services stands with young people across the globe demanding climate action. As an organisation, we continue our commitment to ecological justice…

Inspired by Swedish school student Greta Thunberg, students in Australia and across the globe have asked everyone to join them in calling on governments to commit to urgent action to create climate solutions. Grassroots actions will take place in cities and towns all over the world ahead of the UN Climate Action Summit 2019 in late September, centering on the Global Strike 4 Climate on Friday 20 September. jss.org.au/jesuit-social-services-supports-the-climatestrike/

Oh dear – whenever you see a religious group getting its inspiration from someone like Thunberg instead of Jesus, you know they are in big trouble. If you are not aware of who she is, see this piece for more on this false messiah and eco-evangelist: www.spectator.com.au/2019/04/greta-thunberg-child-sacrifice/

As to the environment, I have said plenty of times now: Yes of course, Christians are to be good stewards of the planet that God gave us. We are to take care of this world, and be responsible managers of it. That is certainly part of our biblical mandate as believers.

But we are not to worship it, nor are we to replace the biblical gospel with a new green gospel, which is really a rehashed Marxist gospel. See more on this here: billmuehlenberg.com/2010/11/23/%e2%80%98useful-idiots%e2%80%99-and-the-greens/

As to liberal Christianity with its watered-down gospel and false gospels, let me finish with three perceptive comments. In 1923 J. Gresham Machen put it this way: “[W]hat the liberal theologian has retained after abandoning to the enemy one Christian doctrine after another is not Christianity at all, but a religion which is so entirely different from Christianity as to belong in a distinct category.”

In the 1930s H. Richard Niebuhr was warning about this very thing. He lamented the emptiness of liberal Protestant theology in which “a God without wrath brought men without sin into a kingdom without judgment through the ministrations of a Christ without a Cross.”

Or as Mark Steyn put it much more recently, very nicely summing up where these folks are at:

Most mainline Protestant churches are, to one degree or another, post-Christian. If they no longer seem disposed to converting the unbelieving to Christ, they can at least convert them to the boggiest of soft-left political cliches, on the grounds that if Jesus were alive today he’d most likely be a gay Anglican bishop in a committed relationship driving around in an environmentally friendly car with an ‘Arms Are for Hugging’ sticker on the way to an interfaith dialogue with a Wiccan and a couple of Wahhabi imams.

Yep. Welcome to the whacky – and deceptive – world of the loony religious left, where anything goes – except the God of the Bible.