This is the sort of thing God would say to his people today.

You may be thinking that my title sounds a bit presumptuous: ‘Bill, you are going to tell us what God’s word is for the 21st century church in Australia and the West?’ Well no, not exactly. What I am going to do is tell you what God did clearly say to his people in the book of Amos, and how we might apply those words to our own situation today. 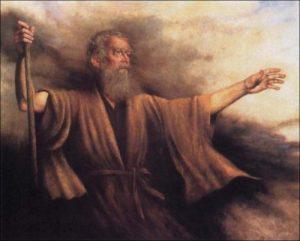 And let me preface this by making this important point: Lots of Christians want to ‘hear’ from God. Well, I can tell you that there is one primary way that God speaks to his people, and if you ignore this means, then you can forget about hearing from God.

God mainly speaks to us through his Word. Yes, he can communicate with us in other ways, but overwhelmingly it is through the study of Scripture that we hear from God and ascertain his will for us. If you are not reading his Word on a daily basis, you are telling God you are not really interested in him and what he has to say.

You are telling him you don’t really love him. Just think of a young couple madly in love: they want to always be with each other, and talk to one another. This should be true of all Christians: we clearly have left our first love if we do not care to hear from God on a regular basis.

I say all this because I just finished my morning reading and things were flying off the pages. As I read through Amos 4-6, I was amazed at how much jumped out at me, and how relevant it all seemed to contemporary Australia and the West. Let me go over a few of these passages. The first is Amos 4:6-9

I gave you empty stomachs in every city
and lack of bread in every town,
yet you have not returned to me,”
declares the Lord.

“I also withheld rain from you
when the harvest was still three months away.
I sent rain on one town,
but withheld it from another.
One field had rain;
another had none and dried up.
People staggered from town to town for water
but did not get enough to drink,
yet you have not returned to me,”
declares the Lord.

“Many times I struck your gardens and vineyards,
destroying them with blight and mildew.
Locusts devoured your fig and olive trees,
yet you have not returned to me,”
declares the Lord.

As most folks know, many large parts of Australia are experiencing extreme drought right now. Groups like the Canberra Declaration have called for a month of prayer, fasting and repentance: canberradeclaration.org.au/prayer-for-rain/

As the text above makes clear, it was God back then who was withholding the rains and allowing suffering in the land. It was because of the sins of his own people. Scripture speaks in these terms constantly, making a clear connection between the weather we experience and the spiritual state of a nation. I list just some of those many passages here: billmuehlenberg.com/2011/02/03/god-providence-and-natural-disaster/

I am not a prophet nor the son of a prophet, so I cannot say with certainty that this current drought in Australia is the direct judgment of God, but given all that Scripture teaches about these matters, it certainly could be.

The next four passages can be applied to all Australian and Western churches, as I will explain in a moment. The four texts are these:

Amos 5:10 There are those who hate the one who upholds justice in court
and detest the one who tells the truth.

Amos 5:23-24 Away with the noise of your songs!
I will not listen to the music of your harps.
But let justice roll on like a river,
righteousness like a never-failing stream!

Amos 6:1,6 Woe to you who are complacent in Zion,
and to you who feel secure on Mount Samaria… you do not grieve over the ruin of Joseph.

Let me highlight one representative church. I am not picking on this one, as all churches can be included here. But since this is Australia’s biggest and most influential church, let me speak about Hillsong in Sydney for a little while. And let me repeat what I have said before about this church:

As you know, NSW is in the middle of a massive debate over some very contentious abortion legislation. I fully believe that every single church in the state should be speaking out on this issue, speaking prophetically and standing up for life. If there was ever the need for a ‘thus sayeth the Lord’ sort of word from our pulpits, this would be it.

Yet overwhelmingly, most churches are not saying a word, or are offering us just weak and watered down platitudes and suggestions. The latter was true of Hillsong. On August 7 pastor Brian Houston did – to his credit – put out a quite brief (240 word) statement on this legislation.

Regrettably it was not quite a ‘thus sayeth the Lord’ word, that’s for sure. Members were reminded of the need for prayer, and then they were told this: “In addition, if you feel inclined to do something, urgently write and share your concerns with your local state MP as they will be the ones deciding which way to vote on this bill in the coming days.” hillsong.com/collected/blog/2019/08/every-life-is-irrevocably-precious-to-god/

Um, is that it? “If you feel inclined”? Really? One might as well have said about the mugging of an old lady taking place just outside the church walls: ‘Pray about it, and if you feel so inclined, maybe intervene and try to save the woman from being killed.’

Why do I suspect that Amos and all the other prophets, along with Jesus and the disciples, would cringe at such a namby-pamby, limp-wristed approach to the most important moral issue of our day? Amos would be thundering from the pulpit, letting the people know in no uncertain terms that they must stand up and be counted here. There can be no straddling the fence.

Ezekiel would be railing against the apathetic parishioners, telling them that they have blood on their hands if they do not speak out on this. Jesus might even be flinging over tables again, concerned that the love of wealth and riches has taken priority over the slaughter of the unborn.

And all the verses from Amos that I offered above come into play here. Most believers today detest those who tell the truth and seek to uphold justice – especially for the unborn. There are very few Christians today who not only seek to do good, but also hate evil. (BTW, Paul says the exact same thing in Romans 12:9: “Hate what is evil; cling to what is good.”)

And what about God saying, ‘away with the noise of your songs’? So many churches today are all about the music, the entertainment, the rock concerts. What does God think about all this, when the vitally important matters are left ignored, or given such superficial treatment? God hates the shedding of innocent blood, but most believers today just want to be entertained.

Finally, we are complacent and apathetic. We are at ease in Sydney and Melbourne and Chicago and London when all around us great evil is taking place, darkness is descending on our lands, and our children are being murdered in the wombs. Incredibly, most Christians just do not give a rip.

It seems to me that if Amos were here today, the words that he wrote 2 ½ millennia ago would be the very same words he would speak today. And he would speak them to Christians in Sydney, in Australia, and in the West. There would be no polite suggestions, but virile words of rebuke.

God have mercy on all of us.