Some thoughts on the Left’s new messianic figure, Greta Thunberg.

By now most of you would have heard of her and seen her – the ever-angry and rather sour-faced activist lavishly praised in the lamestream media, treated like a hero by most progressives, and hailed as a young new messiah by the left. I refer to Greta Thunberg, the 16-year-old climate activist from Sweden. 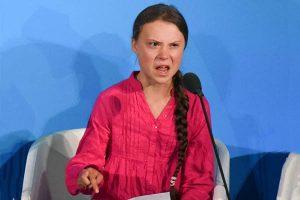 Her recent stint in the US where she offered us her melodramatic and hyper-hyped message of gloom and doom was dutifully run with by the media the world over. Some are now even wondering if the Second Coming has already taken place.

Of course using children for the purposes of political activism and indoctrination is not new. The Communists and the Nazis were both happy to use children to serve in their indoctrination programs. And now we have young Greta being used in the same way.

I have heard some folks who are rightly concerned about her and her Chicken Little scare tactics saying things like, ‘While I disagree with her views, I admire her passion.’ Um, why admire passion when it is wrongly directed and even dangerous passion? Eugenicist Margaret Sanger was passionate about what she did – why would anyone admire her passion?

Radical greenies who burst into farms and cause damage and mischief are also quite passionate – I sure do not admire that. There is nothing praiseworthy about being passionately wrong. And young Greta is about as wrong as you can get, as she denounces the free market and informs us that we are on the eve of destruction, to use the title of an old Barry McGuire song.

The leftist elites are of course happy to use her for their purposes, and one wonders how long she can keep it up. I suppose as long as hyper-left adults keep heaping praise upon her and encourage her along in all this, she will keep going until she burns out.

Uber-socialists like Bernie Sanders and Jeremy Corbyn of course absolutely love the young Swede. But not everyone is so taken with her. Consider this interesting juxtaposition:

And we need to bear in mind that Greta is not well, as she has admitted herself: “I became ill. I fell into depression. I stopped talking and I stopped eating. In two months, I lost about 10 kilograms of weight. Later on, I was diagnosed with Asperger’s Syndrome, OCD and selective mutism.”

Such people need love and care, not exploitation. But the militants were never too bothered about child abuse – as long as it serves the cause. Back in April Paulina Neuding wrote a piece on this wunderkind, and how she is being used and abused by others. She closes with these words:

I am also not questioning Greta’s role as a public speaker, nor the power of hundreds of thousands of protesting school children, nor that climate change is an existential threat to humankind. But adults have a moral obligation to remain adults in relation to children and not be carried away by emotions, icons, selfies, images of mass protests, or messianic or revolutionary dreams. Greta was recently named ”Woman of the Year” by a Swedish newspaper. But she is not a woman, she is a child. It is time we stopped to ask if we are using her, failing her, and even sacrificing her, for what we perceive to be a greater good. https://quillette.com/2019/04/23/self-harm-versus-the-greater-good-greta-thunberg-and-child-activism/

Others agree. David Harsanyi editor of the Federalist sent out this tweet: “The idea that they can use a kid as a political shield, give her immense coverage, and then no [one] is allowed to talk about the substance of her arguments because she is a kid … is just silly. It’s the same with the gun-control kid. He says tons of ridiculous things that are then amplified by media. Yet, people get mad when you point it out. Hey, don’t use kids for your political causes. I hate when either side does it.”

And Black American conservative Candace Owens tweeted: “One day, #GretaThunberg will realize that she is a victim of child abuse, not climate change. I genuinely find the video circulating of her to be sad. The Left is stooping to new lows with this blatant example of child exploitation.”

It is possible to say “trees are good and we shouldn’t wantonly destroy them” without adding “and soon all the trees will be gone and you will suffocate.” But the environmental alarmists always choose to tack on the apocalyptic bit at the end, undermining the validity of their message and creating unnecessary panic.

Once again, we must call this what it is: Child abuse. It may be a smart political move to traumatize children with these End Times prophecies, but it is morally abominable. Yes, tell kids to recycle, pick up trash, plant trees — all fine and worthwhile pursuits. But the hysteria is entirely unjustified. Let kids be kids. They shouldn’t have to wake up every morning with hallucinatory fears about the planet’s demise. https://www.dailywire.com/news/52151/walsh-greta-thunberg-child-abuse-victim-matt-walsh

Yes, all the alarmism and the constant distortion of facts and truth are the real worries here. And new polls in her home country show that only 36 per cent of Swedes buy her man-made global warming hype. As Monica Showalter says about this:

It actually suggests a trend, given how badly Scandinavia in general has previously bought into the myth.  At some point, the bee ess becomes clear after the elites keep drumming it in.  It’s nothing but a disguised scam for intensifying government power and fostering crony capitalism. It points out a sorry reality: that the cute and sincere Swedish kidlet is a pawn of a consortium of greedy green venture capitalists and investors whose agenda is to get in on government-contracts green action based on legislated green priorities, same way Al Gore did, and make themselves a crony-capitalism killing. Greta is being hailed as persuasive in her global warming activism.  In reality, she’s a Hail Mary pass from a rearguard jurocracy hell-bent on institutionalizing global warming to its own benefit.  Sorry, Greta. https://www.americanthinker.com/blog/2019/09/sorry_greta_even_your_fellow_swedes_arent_buying_the_climate_change_claptrap_anymore.html

Dennis Prager reminds us that using hysteria and doomsday scenarios is standard fare for the left. It is as often used as it is often wrong. He writes:

It is critical to remember that hysterias — such as Russian collusion with the Trump campaign, “endemic and systemic racism in America,” the heterosexual AIDS “crisis” in America and the “rape culture” on American college campuses — are to the left what oxygen is to biological life. No oxygen, no life; no hysteria, no left. Apparently, however, the left-wing hysteria about global warming leading to the virtual extinction of life on Earth has not moved enough adults.

Many adults who do not deny that the Earth is getting warmer — such as Danish writer and environmentalist thinker Bjorn Lomborg – do deny that the threat is “existential” and do believe that the left’s solutions, such as the Green New Deal, will damage the world far more than will carbon emissions. Proof that the left is hysterical is its unwillingness to promote nuclear power – a completely clean, non-fossil fuel-based source of power. It provides France with 70 percent of its energy. Anyone who really believes life on Earth is endangered would grasp at the nuclear power lifeboat. That they do not proves what many of us have believed from the beginning: The “existential threat” scenario is another left-wing falsehood used to whip up hysteria that will lead to the left’s control of the economy and society. https://townhall.com/columnists/dennisprager/2019/09/24/if-you-cant-sell-your-hysteria-to-adults-try-kids-n2553546

Another Scandinavian, Kathrine Jebsen Moore, also cites the Danish Lomborg to try to bring some sense into the debate:

Bjorn Lomborg, author of Cool It and The Skeptical Environmentalist, tweeted: “Thunberg’s solution to ‘just say no’ is not only naive and impossible. Trying to attain it will incur tens or even hundreds of trillions of dollars of net costs.” Those costs would have a dramatic impact on the way of life these protesting schoolchildren presently take for granted. Lomborg argues that instead of ploughing more money into inefficient solar and wind power, more should be invested in innovating green energy to make it so cheap it eventually undercuts fossil fuels and halts climate change for good. https://quillette.com/2019/03/21/when-children-protest-adults-should-tell-them-the-truth/

And a brand-new piece by David Harsanyi is worth highlighting here. He reminds us of the real world that we – and Greta – live in:

Sixteen-year-old Swedish climate change activist Greta Thunberg lives in the healthiest, wealthiest, safest, and most peaceful era humans have ever known. She is one of the luckiest people ever to have lived. In a just world, Thunberg would be at the United Nations thanking capitalist countries for bequeathing her this remarkable inheritance. Instead, she, like millions of other indoctrinated kids her age, act as if they live in a uniquely broken world on the precipice of disaster. This is a tragedy.

And Thunberg’s dream for the future means technocratic regimes will have to displace capitalistic societies. We can see this future in the radical environmentalist plans of Rep. Alexandria Ocasio-Cortez’s Green New Deal, one supported by leading Democratic Party candidates. It’s authoritarianism. There is no other way to describe a regulatory regime that dictates exactly what Americans can consume, sell, drive, eat, and work on. One imagines that most Americans, through their actions, will continue to reject these regressive ideas. One reason they should is so that Greta Thunberg’s generation won’t have to suffer needlessly. https://thefederalist.com/2019/09/23/the-tragedy-of-greta-thunberg/

We need to pray for young Greta. With so many selfish adults trying to use her and cash in on her fame and drawing power, one fears for her long-term health and safety. And let’s hope that she sheds the alarmist ideology and becomes a bit more conversant with the facts. That would help a lot as well.

27 Replies to “On Greta, Regrettably”