In this passage we find Jesus saying the following: “And do not fear those who kill the body but cannot kill the soul. Rather fear him who can destroy both soul and body in hell.” We also find a version of this in Luke 12:4-5: “I tell you, my friends, do not fear those who kill the body, and after that have nothing more that they can do. But I will warn you whom to fear: fear him who, after he has killed, has authority to cast into hell. Yes, I tell you, fear him!”

Here I will mainly concentrate on the text as found in Matthew’s gospel. The main difficulty with this passage is this: who is the ‘him’ that Jesus is referring to? The main two options have been God or Satan, with the majority of scholars and commentators running with the former. 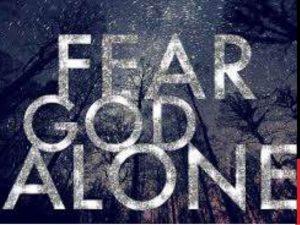 I go along with the mainstream view, but it is worth teasing this passage out a bit further. The immediate context (Matt. 10:26-33) has to do with fearing man. In verse 26 Jesus says, “have no fear of them”. In verse 17 we see who is being referred to: “Beware of men, for they will deliver you over to courts and flog you in their synagogues.”

So we have prohibitions against fear, but the context seems to be the fear of man. Verse 28 talks about not fearing those (plural), but fearing him (singular). So men seemed to be ruled out here, but we still must determine who the ‘him’ is that we should fear.

As mentioned, most take this as referring to God. Let me offer a few representative quotes from the commentators on this. And it is not just New Testament scholars and commentators that must decide which way to go here. Bible translators (usually teams of scholars) also have to decide to some extent how to proceed with this.

Thus Craig Blomberg in his commentary says this about the ‘him’ (sometimes translated as ‘the one’): “The NIV rightly capitalizes ‘One’ as referring to God and not the devil (cf. Jas 4:12).” That verse is worth looking at here briefly.

It says, “There is only one lawgiver and judge, he who is able to save and to destroy.” Certainly, Satan is not being referred to here, but God. As we shall see, God is clearly the one who has power over life and death – he both gives life and he takes it away.

D. A. Carson says this of the passage in Matthew:

The second reason for learning not to fear men emerges from the fact that the worst they can do does not match the worst God can do. Though Satan may have great power (6:13; 24:22), only God can destroy soul and body in hell. “The fear of the LORD is” therefore “the beginning of wisdom” (Prov 9:10); for if God be truly feared, none other need be. Fear of men proves to be a snare (Prov 29:25). The same thought is found in extracanonical Jewish literature…

Others concur. R. T. France for example puts it this way:

The “one” who has the power to destroy in hell is of course God himself; there is no suggestion in biblical literature that the devil has the power of judgment, nor that God’s people should fear him, nor is the devil referred to at all in this context. But a healthy ‘fear’ of God is a recurrent feature of OT spirituality which the NT in no way mitigates. The theme will be taken up again in vv. 32-33 where the fear of human opposition rather than of God renders the disciple liable to eventual repudiation before God.

He goes on to comment on verse 29 and quite helpfully says this: “Fear of God is balanced by trust in God as the disciple’s heavenly Father; the God who can destroy in hell is also the God who cares for the smallest bird. Within his fatherly care, there is nothing to fear from human hostility.”

Or as Donald Hagner remarks:

If the mission is the will and work of God through the disciples, they need not fear. The worst that human persecution can bring, in any event, is the death of the body (soma). But a human being, made in the image of God, is more than a body, being a combination of both body and soul (psuche). . . . The persecutors may kill the body, but only God has power over the soul and thus the whole person. It is thus God, the final judge of all, and not human beings, who alone is to be feared. This emphasis on freedom from fear of one’s persecutors became very important to the early Church in the midst of much suffering (cf. 1 Peter 3:14; Rev 2:10).

But as I mentioned, there is a minority position on this which takes the view that the devil is the one being referred to in this passage. N. T. Wright is one such scholar who holds to this position. I recall reading him some years ago in one of his massive tomes seeking to make this case.

I could go back and try to unearth that particular discussion, but to save time, let me simply make use of his popular-level commentary on Matthew where he also runs with this point of view. He writes: “It’s important to be clear at this point. Some people think that when Jesus urges us to fear the one who can destroy body and soul in hell, he is referring to God himself. But the point here is the opposite. God is the one we do not have to fear. Indeed, he is the one we can trust with our lives, our souls, our bodies, everything.”

Hmm. Yes, we of course can trust our lives to God. But it is rather odd for this world-class scholar to make the claim that we need not fear God! Scripture throughout tells us that we SHOULD fear God. Let me offer just six (of many passages on this) – three from each Testament:

-Deuteronomy 6:24 The LORD commanded us to obey all these decrees and to fear the LORD our God.
-Psalm 2:11 Serve the LORD with fear and celebrate his rule with trembling.
-Proverbs 1:7 The fear of the LORD is the beginning of knowledge, but fools despise wisdom and discipline.
-2 Corinthians 7:1 Therefore, having these promises, beloved, let us cleanse ourselves from all filthiness of the flesh and spirit, perfecting holiness in the fear of God.
-Hebrews 12:28 be thankful, and so worship God acceptably with reverence and awe.
-Revelation 15:4 Who will not fear you, Lord, and bring glory to your name? For you alone are holy.

And I have often written on the fear of God and how we are to understand it. See these two articles for example:

As most commentators rightly note, we have no hint in Scripture that Satan is to be feared. As Leon Morris puts it: “The Bible never says that believers are to be afraid of Satan. If we are going to be afraid, let it not be of the minor danger that is all that evil people or even Satan himself can bring on us, but of the major danger of God’s holy wrath against evil.”

Grant Osborne writes: “God alone is sovereign over both the temporal body and the eternal soul. Thus he alone deserves to be feared, for he can destroy not only the body but cast the whole person into everlasting torment.” Or as R. C. Sproul puts it: “Was He speaking of the devil? No, the devil cannot touch a Christian’s soul. The only One who can throw a human being into hell, body and soul, is God. Clearly, we should have a fear, a healthy reverence for God’s power.”

Let me finish with two comments from the version found in Luke. Philip Graham Ryken says this about the text: “There is only one right and proper fear, and that is the fear of God. When Jesus speaks here about someone who ‘has authority to cast into hell’ (Luke 12:5), he is not talking about Satan; he is talking about almighty God! Hell is not Satan’s dominion, but only his prison. God is the one who has authority over heaven or hell.”

In sum, it seems that Satan is not the one in view here. It should be pointed out that Wright is not the only one to take this alternative viewpoint; there have been others. But again, those who run with this position seem to be in the clear minority, at least amongst conservative evangelical scholars. On this particular matter I think it wise to stick with the majority position on the matter.