Thank God for one bold and biblical churchman, Glenn Davies:

Today in far too many churches – including supposedly Bible-based evangelical churches – we find this mindset in action: ‘Hey, Jesus was a friend of sinners, and we should be as well. Thus we welcome all sinners into our churches. They can become members, they can join in all activities, they can even get involved in leadership roles, etc.’ 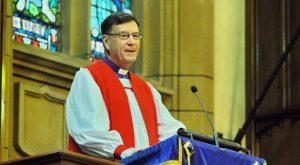 That might sound loving and Christlike, but it is nothing of the sort. The church is a home of sinners to be sure – but sinners who have been forgiven and transformed by Christ. It is a place where the redeemed of the Lord meet together to grow in their faith.

Sure, the non-Christian is welcome to come into churches and hear the gospel being proclaimed. But church membership – like all membership – is restrictive. A member of a church is one who has forsaken sin and self and seeks to become more Christlike.

Church membership therefore includes things like church discipline – admittedly something most churches today have long ago abandoned. But I have explained all this in some detail elsewhere, as in this piece: billmuehlenberg.com/2015/07/11/church-visitors-versus-church-members/

I hope you will read that entire article, but here is part of it:

The New Testament speaks much about committed membership of the redeemed who are in a covenant relationship with God and one another in a local fellowship. Thus not just anyone who rolls up to a particular church is a committed member of that church. Church membership has to do with those who are Christ’s by faith and repentance, and those who abide by the house rules.

So yes the church doors are always open for anyone to come in and learn about the Christian faith. There is nothing wrong with that. But when it comes to something like church membership, there are some clearly delineated parameters which need to be in place, which define what the church is all about, what it believes, and what it expects of its members.

In many respects this is just like membership in any other organisation. The organisation has a clear statement of purpose or beliefs, and it has clearly defined rules and regulations. Those who agree with the overall thrust of what it is all about, and are willing to abide by the rules are welcome to join and become active members.

But those who do not accept the club or organisation ethos, values and beliefs, and refuse to pay any attention to the rules will of course not be welcomed as members. The New Testament basically operates this way when it comes to close and active fellowship in local churches.

It too has membership requirements and rules. Those who are born again can join in and become a member, partake of the Lord’s Supper, and so on. And if and when they go astray, they are the subject of admonition and correction. And if that fails, they can be removed from church fellowship.

Church membership and church discipline are therefore two sides of the same coin. A real member of the body of Christ – and a local fellowship of believers – will seek to be accountable and committed. When obvious sin and rebellion is found in the camp, then it must be dealt with.

As American Pastor John MacArthur once put it:

Churching the unchurched is an absolute fallacy – it is like purposing to let the tares in. It is absolutely bizarre to want to make unsaved people feel comfortable in a church. The church is not a building – the church is a group of worshiping, redeemed, and sanctified people among whom an unbeliever should feel either miserable, convicted and drawn to Christ, or else alienated and isolated. Only if the church hides its message and ceases to be what God designed the church to be, can it make an unbeliever comfortable.

Or as Paul Washer rightly stated:

What you actually have in so many congregations today is a bunch of goats among the sheep, the sowing of tares among the wheat (Matt. 25:31-46; 13:24-30). Because very little biblical, compassionate church discipline is practiced, goats live among the sheep and wolves feed on and destroy the sheep. And those of you who are leaders in such churches are going to pay a high penalty when you stand before the One who loves them, because you did not have enough courage to stand up and confront the wicked.

I say all this because this is such a big problem today: biblical-based church membership and discipline have largely disappeared in so many of our churches. As a result, when a church leader actually says we must revert back to it, he is seen as some kind of really radical dude, introducing strange new notions into the church.

And of course he is also seen as being unloving, intolerant, exclusive and not very Christlike! But he is simply calling us back to true Christianity. We have a perfect illustration of this that has just hit the press yesterday. I refer to Sydney’s Anglican Archbishop Glenn Davies. For daring to be biblical, he has caused a real storm. Consider how one secular newspaper ran with this story:

Anglican Archbishop of Sydney Glenn Davies has told Anglican supporters of same-sex marriage they should leave the church rather than “betray God’s word” in a scathing speech condemning progressive elements within the faith. He said the church must focus on “evangelising Australia” rather than “the constant pressure to change our doctrine in order to satisfy the lusts and pleasures of the world”.

Dr Davies directed his strongest criticism at church branches that had moved to bless same-sex unions, such as the Wangaratta diocese in Victoria. That decision has now been referred to the church’s internal appeals tribunal. Addressing the 51st Synod of the Diocese of Sydney, the Anglican church’s parliament, on Monday, Dr Davies warned the church had “entered treacherous waters” and called on those who supported same-sex marriage to leave.

“I fear for the stability of the Anglican Church of Australia. These developments have the potential to fracture our fellowship and impair our communion. I have stated this on numerous occasions at the annual National Bishops’ Conference, but sadly to little effect,” said Dr Davies, who is the Synod president.

“My own view is that if people wish to change the doctrine of our church, they should start a new church or join a church more aligned to their views – but do not ruin the Anglican Church by abandoning the plain teaching of Scripture. Please leave us. We have far too much work to do in evangelising Australia to be distracted by the constant pressure to change our doctrine in order to satisfy the lusts and pleasures of the world.” Dr Davies said to bless same-sex unions would be to “betray God’s word”. www.smh.com.au/national/please-leave-us-archbishop-tells-same-sex-marriage-supporters-to-abandon-anglican-church-20191015-p530tk.htmlUTC

Wow, that’s not something you hear every day. Imagine that: a church leader telling his people to actually be biblical – or else! How novel! Actually insisting that a church conform, not to the spirit of the age, but to the clear teachings of the Word of God.

Give that guy a medal! He deserves one. Indeed, for every brave church leader who encourages apostates and reprobates to find another church, there would be dozens who would welcome them into their churches with open arms! Davies is certainly going against the flow here!

Of course up until recently this stance for biblical truth was just garden variety Christianity. It was basic Christianity 101. This used to be standard operating procedure. This was simply what we expected of our churches. But so many churches, denominations, pastors and church leaders today have so utterly compromised and capitulated, craving the praise of men rather than the praise of God, that the words of Davies now sound so very foreign to our ears.

It is as if he has just made up some brand-new teaching, never heard before. All this indicates just how far the church has fallen in the West. When a restatement of biblical truth surprises us or startles us or even shocks us, then you know things have gotten pretty bad.

So bad in fact that all the fake Christians started foaming at the mouth over his fully sensible and biblical remarks. Not surprisingly for example, we had arch-apostate and hyper-heretic Father Rod Bower of the Anglican Parish of Gosford responding to Davies via Facebook:

So deeply saddened to hear my Archbishop tell me that I am not welcome in the church. But so thankful that in the Diocese of Newcastle we seek to be a comprehensive community living with the tensions, challenges and growth opportunities of difference. Unity in diversity is in the DNA of historic Anglicanism, The Archbishop’s comments are a dramatic departure from the culture of Anglicanism and are most regrettable. In a society being torn apart by polarization, the ability to live together with difference is one of the great gifts the Anglican Church has to offer the world. This is the gift of hope as we float in what can sometimes feel like a sea of hopelessness. For us to cease to live the historic model of unity diversity would be a very great tragedy indeed.
Fr Rod.

Oh good grief. It is time for this guy to get a new day job. He has been twisting and distorting biblical Christianity for years now. I sure would not want to be in his shoes when he one day stands before his maker and hears God’s verdict about him.

God bless you Glenn Davies. We need many more strong Christian leaders like you: leaders with the guts and the Holy Ghost boldness to speak biblical truth, regardless of how unpopular or unwelcome those truths are to the masses. May your tribe be multiplied, and your courageous example followed by many.

31 Replies to “Finally, a Brave and Biblical Church Leader”