We must stand with Scripture and reject these two major errors:

These two isms are heresies which orthodox Christianity has always rejected and treated as clear departures from biblical teaching. The first one claims that everyone will be saved while the second one claims that the lost will simply be annihilated, and not suffer endless punishment.

I have of course written on both issues before. As to the former, see here: billmuehlenberg.com/2011/03/12/against-universalism/

As to the latter, see here: billmuehlenberg.com/2014/12/04/against-annihilationism-part-one/ 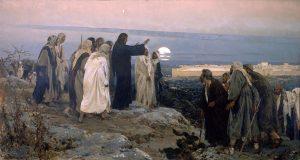 Those three pieces offer plenty of scriptural support for the twin truths that not all mankind will be saved, and that hell is real and a place of eternal torment. Please have a read of those for much more detail on these matters. The reason I am revisiting these major theological errors is because of my daily reading in Matthew.

I once again just finished reading the Olivet Discourse. This is a major set of teachings which Jesus gave on the Mount of Olives. It deals with what will happen at the end of the age (Matt. 24:3). It is found in Matthew 24-25, Mark 13, and Luke 21. The major themes found here are that of judgment, and the need to always be alert.

And these two themes certainly go together. As Leon Morris comments, “The last of Jesus’ major discourses in this Gospel is largely concerned with judgment and the conduct expected of the follower of Jesus in view of the coming judgment.”

The judgment spoken of is two-fold. As Craig Blomberg puts it, “The physical judgment of unrepentant Israel is epitomized by the destruction of the temple (24:15-20), but there is a coming judgment of all nations or peoples for which every human must prepare (25:31-46).”

David Turner offers a helpful approach to this section of scripture: “The Olivet Discourse makes it clear that biblical prophecy is more than mere prediction. The knowledge of what God will do in the future (24:1–35) must have a profound effect upon God’s people in the present (24:36–25:46). A genuine grasp of this prophetic Scripture will not lead to date setting but to alertness, faithfulness, fruitfulness, and service to Jesus’s most needy disciples.”

Here I will just deal with the version found in Matthew’s Gospel. Having just reread those two chapters, I was again struck as to how often these two truths about salvation and punishment are emphasised. But I must acknowledge that this discourse can be quite difficult to interpret at times, due in part to all the rich prophetic language employed.

A main issue is how to understand when these things are to take place. As Robert Mounce puts it, “The essential problem is that Matthew seems to move back and forth between an impending crisis (the fall of Jerusalem), and the end of the age when Jesus would return in judgment.”

It is not my intention to enter into all the complexities of biblical eschatology and apocalyptic literature here. But R. Kent Hughes is quite correct to say that this is “one of the most difficult texts in the New Testament. . . . Study of it requires a proper humility and a willingness to admit that we do not know everything.” Quite right.

However, we still can glean some theological certainty here, especially on the two issues set before us. So let me briefly mention each one of the relevant passages as we find them here. First, we have Matt. 24:4-5: “Jesus answered: ‘Watch out that no one deceives you. For many will come in my name, claiming, “I am the Messiah,” and will deceive many’.”

It is hard to square the notion of all being saved with this idea of many being deceived. And in verses 12-13 we read: “Because of the increase of wickedness, the love of most will grow cold, but the one who stands firm to the end will be saved.” Without getting into the fine detail of what ‘standing firm’ entails exactly, it is clear that not all will be saved. Some instead will grow cold.

This chapter ends with the story of the wise and unwise stewards. Verses 50-51 say: “The master of that servant will come on a day when he does not expect him and at an hour he is not aware of. He will cut him to pieces and assign him a place with the hypocrites, where there will be weeping and gnashing of teeth.” Even if figurative language is being used here, it is hard to square such suffering with annihilation.

Matthew 25 begins with the parable of the ten virgins. This also clearly refers to two humanities, to two types of people, and to two destinies. Verses 10-12 certainly make this clear: “But while they were on their way to buy the oil, the bridegroom arrived. The virgins who were ready went in with him to the wedding banquet. And the door was shut. Later the others also came. ‘Lord, Lord,’ they said, ‘open the door for us!’ But he replied, ‘Truly I tell you, I don’t know you’.” It is hard to be one of His if you are not known by Him.

Next we have the parable of the bags of gold, and again we have the two classes of people. Those who are none of his are described in verses 29-30: “For whoever has will be given more, and they will have an abundance. Whoever does not have, even what they have will be taken from them. And throw that worthless servant outside, into the darkness, where there will be weeping and gnashing of teeth.” Some enter the joy of the Lord while others face a destiny of torment and suffering.

The final parable, that of the sheep and the goats, offers the same sober warning and the same theological reality. It closes in verses 44-46 with these words: “They also will answer, ‘Lord, when did we see you hungry or thirsty or a stranger or needing clothes or sick or in prison, and did not help you?’ He will reply, ‘Truly I tell you, whatever you did not do for one of the least of these, you did not do for me.’ Then they will go away to eternal punishment, but the righteous to eternal life.”

But some seek to twist what is being taught here. Anyone who is aware of how the annihilationists argue will note that they try to claim that some of the Greek words employed in this regard do not actually mean eternal (see my article above for more on this).

But if we bought their argument, then we certainly would have a problem here, for the very same Greek word is twice used here for ‘eternal’ in verse 46. If it does not mean eternal punishment, then it also means there is no eternal life. You can’t have one without the other.

All up, the passages presented here seem to give a pretty clear message: there are two sorts of people and two eternal destinies. In these two chapters Jesus is repeatedly speaking about two basic groups of people: those who are really his, and those who are not. There is no universalism being taught here. There is no idea of only one humanity. Instead, we have two clearly differing humanities. See this article for much more detail on this: billmuehlenberg.com/2017/06/07/two-humanities-two-destinies/

And we also have a number of references to the idea of suffering and torment – not just temporary punishment but eternal punishment. Sure, plenty of people – including plenty of Christians – no longer like the idea of hell and choose not to believe in it, but it is clear that Jesus did wholeheartedly adhere to it. See more on this here: billmuehlenberg.com/2011/03/11/on-hell/

The case for two humanities and the reality of hell is obviously found throughout Scripture, not just in two chapters in Matthew. But if we find this much clear evidence of these truths in just the Olivet Discourse, how much more so in all of the Bible?

One Reply to “The Olivet Discourse vs Universalism and Annihilationism”