As we have shown in Part One, the truth is, on biblical and exegetical grounds, the annihilationists have very little space to stand on. The Scriptures consistently and coherently support the traditional understanding of hell as eternal punishment.

Thus the revisionists usually resort to other means to make their case: they will emphasise theological or philosophical grounds much more often to argue their position. The main reasons these folks question eternal punishment is not because of Scripture – the texts are pretty clear. Their main objections centre on things like the charge of injustice. They claim it is just unfair and unjust for people to be punished forever.

As mentioned above, all these folks are doing is claiming that they are more fair, more just, and more merciful than God is. That is a very dangerous place to be in. And keep in mind just who spoke about hell more than anyone else in the entire Bible. 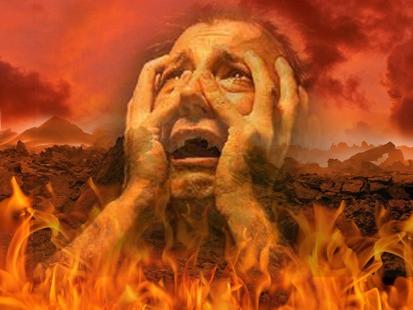 Jesus not only spoke about hell constantly, he spoke about it more than he did about heaven. If it were not for Jesus, we would not know very much about hell. So these people who somehow think they can be more like Jesus than Jesus was are really in a bad spot. I will run with Jesus on this any day of the week. Writes Michael Bird,

Judgement by hell was a consistent theme in Jesus’ preaching. Jesus used images, concepts, and motifs found in Scripture and known in contemporary usage – examples both historical and about the eschatological hereafter – to underscore the dire state of those who refuse God. Importantly, the judgment oracles in the Gospels about hell are not the rants of a man who looks forward to seeing sinners tormented for their sins, but they are urgent warnings calling people to repent. Let us remember that to preach a warning of judgment so that people can avoid it is really an act of mercy.

As Christopher Morgan remarks, the Scriptures “assert that God’s judgment settles all moral problems, it does not create them.” He continues:

God’s judgment is not evil or vindictive, but just, holy, righteous, necessary, and even glorious (Rom. 9:19-23). Part of God’s beauty is his just character. The biblical writers were not so concerned with how God could be just if he punished the wicked forever, but rather with how God could be just and not punish evildoers immediately. The people of God in the Scriptures (e.g., Habakkuk and Jonah) struggled regularly with the merciful patience of God, but seldom with his judgment on evildoers (unless, of course, they themselves were the evildoers).

And the truth is, those who think they know better than God about his just judgment on sin really do not at all appreciate either the great holiness and righteousness of God, or the utter depth and depravity of sin. The object of our sinning determines the justice of the punishment.

If I kick my sister in the shins in a fit of rage, that is a sinful act deserving of some punishment. But if I try to kick the Queen of England, that punishment will be worse because the offence is worse. The one whom I sinned against is greater in importance and dignity, at least in terms of office.

As Morgan rightly states, what we have here – with the annihilationists – is allowing the sinner to determine what his punishment should be. And in this case, it is nothing. These critics claim that it is not fair for a short life of sin to be punished with eternal torment. Morgan says:

It may take only a moment to pull a trigger and kill a dozen people, but the punishment will (hopefully) not be merely momentary. It is not the amount of time that determines the punishment, the crime itself does. Sin is an infinite and cosmic treason. Sin is a horrible crime because it screams, “I hate you,” to the true and living God, who deserves and demands our total love. In sin, human beings turn their back on the end for which God created them and became worthless (Rom. 3:12).

Because we minimise who God is in his deep holiness and purity, we minimise sin, and we therefore minimise the just punishment for our sin. We are judging by worldly standards in other words, and not by God’s standards. And we are in fact judging God, putting him in the dock, when we claim that we would be more fair and more just when it comes to the punishment of sin.

And the very notion of justice of course goes straight out the window when we push annihilationism. Their position offers terrific news for every sinner. They can live like hell in this life, and engage in all sorts of horrific sin and evil, and when they die, that’s it. Poof, they’re gone. That sounds like a recipe for disaster. Sin your heart out and face no consequences whatsoever for your actions. What sort of justice is that?

I for one am glad that unregenerate monsters like Hitler will face the full wrath of God, and get their just deserts, and not just evaporate into thin air without the slightest recompense. If God were to allow such things to happen, then clearly he would not be a just God. He would be just as bad as Hitler for refusing to punish sin. I could never worship a God like that.

The love of God is always to be seen in the light of the justice of God. The two go together – always. Hell does not pit justice against love, but ties them together. Robert Gundry is worth quoting at length here:

This has always been the traditional Christian understanding of hell. It entails eternal, conscious torment of the wicked. And it is fully consistent with the love and justice of God. Let me conclude with a few quotes from the great Charles Spurgeon on this important subject:

“No preacher was ever so loving as Christ, but no man ever spoke so horribly about hell.”

“It is a very remarkable fact that no inspired preacher of whom we have any record ever uttered such terrible words concerning the destiny of the lost as our Lord Jesus Christ.”

“If sinners be damned, at least let them leap to Hell over our bodies. If they will perish, let them perish with our arms about their knees. Let no one go there unwarned and unprayed for.”

Part One of this article is found here: billmuehlenberg.com/2014/12/04/against-annihilationism-part-one/

9 Replies to “Against Annihilationism, Part Two”