If you ever wonder why leaders and experts screw up so many things, this should answer your questions:

Sometimes the best way to share truth in a truth-starved world is to simply revisit great thinkers and great thoughts from the past – or from more recent times. So much great learning and commentary on the state of play of the West today is found in the writings of these great minds.

Many of such folks could be mentioned here. One thinks of the great English philosopher and Christian, Roger Scruton. I have 16 of his books and all are top-notch. Or of course the late great Francis Schaeffer. I have all 22 (or is it 23?) of his books. 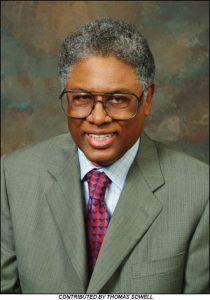 But here I want to run with the American Black economist and commentator Thomas Sowell. While I only have 25 of his numerous volumes, none of them disappoint. And some of his now somewhat older volumes are always well worth revisiting.

His 1995 book The Vision of the Anointed (Basic Books) is one such volume which certainly is worth considering afresh. With the subtitle, “Self-Congratulation as a Basis for Social Policy,” he looks at how our political and social policy elites keep getting things wrong, and keep doing more harm than good.

It all flows from their flawed vision of the world. Instead of seeing the world as a fallen place with countless shortcomings and limitations, they see the world as being perfectible – and they will be the ones who do the perfecting.

These elites think they know better than the mere masses, and they seek political power to implement their visions of the “good” society. Their vision is really “a vision of themselves and of their moral role in that world. It is a vision of differential rectitude. It is not a vision of the tragedy of the human condition: Problems exist because others are not as wise or as virtuous as the anointed.”

So they are on a mission to correct all problems – by force if necessary. Indeed, they are coercive utopians. They want to harness the power of the state and the force of law to compel everyone else to submit to their vision of the better life.

Sowell has written on these themes in other books, notably A Conflict of Visions: Ideological Origins of Political Struggles (Morrow, 1987). I have written about these books several times now: billmuehlenberg.com/2012/06/12/a-conflict-of-ideologies/

As I said in the second article:

The unconstrained vision (the radical or leftist worldview) tends to downplay limits. Mankind is seen as more or less perfectible; social and political utopia is to a large extent achievable; and evil is not endemic or inherent in the human condition, and therefore is able to be mostly eliminated.

The conservative vision tends to reflect the Judeo-Christian understanding that mankind is fallen, is limited, is prone to sin and self, and cannot produce heaven on earth, at least without the help of God. The left-liberal vision, by contrast, tends to see the human condition as innocent, malleable and perfectible, and tends to think that utopia on earth is achievable under the right social conditions.

In The Vision of the Anointed Sowell says this:

Despite the great variety of issues in a series of crusading movements among the intelligentsia during the twentieth century, several key elements have been common to most of them:

One can immediately think of current examples of this today. Just consider the climate change panic. ‘We are all doomed, and the government must act NOW to solve all our problems.’ And if to save the climate the government must trample on our freedoms and punish dissenters, then so be it. Saving the planet trumps mere human liberties and freedoms.

As if paying higher taxes to the government will change the climate! But the anointed are always on such crusades. Whether it is Marxism or the sexual revolution or what have you, it is for your good – whether we like it or not. You MUST submit – recalcitrants will be treated harshly.

So the Communists could ruthlessly kill 100 million people – all in the name of helping people. Sowell goes on to talk about “Patterns of Failure”. This involves: the “crisis;” the “solution;” the result; and the response. He looks at such things as the “war on poverty” and criminal justice.

Consider what he says about sex education. With things like teen pregnancies starting to emerge on a national level, governments became convinced that they must step in and push solutions such as comprehensive sex education classes. The belief was that the more the better, and the earlier the better.

Billions of taxpayer dollars were spent on this. Governments joined forces with groups like Planned Parenthood in targeting our children, often against parental wishes. “Family planning” clinics were set up in or near schools, condoms were handed out in the millions, and never-ending radical sex ed classes were run with.

The results? The very opposite of what the anointed claimed would happen. Says Sowell:

As sex education programs spread widely through the American educational system during the 1970s, the pregnancy rate among 15- to 19-year-old females rose from approximately 68 per thousand in 1970 to approximately 96 per thousand by 1980. Among unmarried girls in the 15- to 17-year-old bracket, birth rates rose 29 percent between 1970 and 1984, despite a massive increase in abortions, which more than doubled in the same period. Among girls under 15, the number of abortions surpassed the number of live births by 1974.

Surprise, surprise. Inundate innocent young children with all things sexual from K-12, and guess what: sexual promiscuity, pregnancies, sexually-transmitted diseases and abortions all skyrocketed. And how did the elites respond to this? They simply said we need MORE sex ed. ‘Not enough has been done – we need to increase what we are doing.’

Talk about a recipe for disaster. Failed policies of the anointed are not looked at carefully and discarded. Instead, the elites simply dig in their heels and say they have not been tried long enough or hard enough. What was that definition of insanity?  Doing the same thing over and over again and expecting a different result.

But the elites know better than us. We must just sit down and shut up. They are the experts, and we are the peons. So they must persist in their bogus policies, because they are our appointed guardians and de facto parents. The state, Big Brother, and the elites, all know best.

As Sowell puts it:

This utter certainty of being right, even to the point of circumventing parents, is completely consistent with the vision, however inconsistent it is with decades of empirical evidence on the actual consequences of “healthy attitudes toward sex” as promoted by “experts.” The key point about the sex education crusade, from the standpoint of understanding the vision of the anointed, is that evidence proved to be as irrelevant here as on other issues.

And as Sowell reminds us, many of these elites were in fact pushing radical agendas. Their concern was really not about STDs or abortions, but about “out-dated” and “puritanical” values of the parents which must be eliminated from the minds and hearts of vulnerable young students. He writes:

In short, however politically useful public concern about teenage pregnancy and venereal disease might be in obtaining government money and access to a captive audience in the public schools, the real goal was to change students’ attitudes – put bluntly, to brainwash them with the vision of the anointed, in order to supplant the values they had been taught at home. In the words of an article in the Journal of School Health, sex education presents “an exciting opportunity to develop new norms.” Only in the light of this agenda does it make sense that so-called “sex education” should be advocated to take place throughout the school years – from kindergarten to college – when it could not possibly take that much time to teach basic biological or medical information about sex. What takes that long is a constant indoctrination in new attitudes.

Yes quite right. If you want to know why most governments, experts and elites keep pushing failed policies and patently loony solutions to real or imagined problems, understanding how the anointed work, and what their vision is, goes a long way in explaining things.

Let me conclude with the final two paragraphs of this superlative book:

The full dangers of the vision of the anointed cannot reveal themselves immediately. Even the anointed themselves are currently under at least the residual influence of traditional philosophical, religious, and moral inhibitions. To the extent that their vision prevails and endures, however, successive generations of the anointed will be less and less under the influence of these eroding traditional constraints, and the pure logic of their vision can operate more fully. Conversely, among those not convinced of this vision’s virtues, the spirit of resistance may well erode and the sense of outrage at its consequences become dulled by the accumulation of precedents for policies and actions that might once have been considered intolerable.

In the anointed we find a whole class of supposedly “thinking people” who do remarkably little thinking about substance and a great deal of verbal expression. In order that this relatively small group of people can believe themselves wiser and nobler than the common herd, we have adopted policies which impose heavy costs on millions of other human beings, not only in taxes, but also in lost jobs, social disintegration, and a loss of personal safety. Seldom have so few cost so much to so many.

7 Replies to “The (Failed) Vision of the Anointed”