What exactly do we mean when we stress the importance of ‘the priesthood of all believers’?

One core teaching of the Reformation in general, and of Luther in particular, has to do with the priesthood of all believers. It is misunderstood by many, and often attacked by its critics. So it is worth looking at this concept in a bit more detail as I seek to clear up some of the confusion concerning it.

The exact phrase itself Luther did not use, but certainly he ran with the concept. A broad understanding of it would be that all Christians have full access to God because of Christ and what he did. Because Christ is our sole mediator, not man, we can fully enjoy relationship with God now (see 1 Tim. 2:5), and also minister to one another in various ways. It also means that all Christians have the ability to read and understand Scripture for themselves. 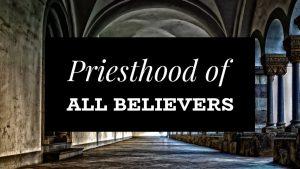 New Testament passages such as 1 Peter 2:9 undergird this concept: “But you are a chosen people, a royal priesthood, a holy nation, God’s special possession, that you may declare the praises of him who called you out of darkness into his wonderful light.”

Other verses appealed to include Revelation 1:5–6: “To him who loves us and has freed us from our sins by his blood, and has made us to be a kingdom and priests to serve his God and Father – to him be glory and power for ever and ever! Amen.”

But some background is needed here. What were Luther and the Reformers dealing with back then? Several things: a strong distinction between clergy and laity; the increasing ritualisation of the church and worship; and the belief that spiritual truths had to be explained to others by religious elites.

The clergy/laity distinction was seen as a major problem. As Catholic writer Peter Stanford put it in his biography of Luther: “The standard medieval view (and one that persisted in Catholicism for many centuries afterwards) was that the laity were in almost all matters second-class citizens compared to the clergy. That, Luther argued, could not continue.”

Alister McGrath puts it this way in his important 2007 volume, Christianity’s Dangerous Idea:

Luther grounded his doctrine of the “priesthood of all believers” in the New Testament’s concept of the church as a corporate “royal priesthood.” There was no basis, Luther argued, for asserting that the clergy are superior to the laity, as if they are some kind of spiritual elite or their ordination confers upon them some special “indelible character.” The clergy are merely laity who have been recognized by other laity within the community of the church as having special gifts and who are authorized by their colleagues to exercise a pastoral or teaching ministry among them. The authority to make such decisions thus rests with all Christians, not with an autocratic elite or putative spiritual aristocracy.

Several more points need to be made here. Luther and the magisterial Reformers were arguing for an equality of standing before God. Because of the work of Christ, all believers are equal in terms of their standing before God. But differing offices or functions still exist in such a setting.

So church leadership is of course held to by the Reformers, as it is clearly taught throughout the New Testament. And this has a bearing on things like the understanding, interpreting and teaching of Scripture. On the one hand ALL believers can do these things. What Jesus said in John 16:13 is a vital part of this: “When the Spirit of truth comes, he will guide you into all the truth”.

But on the other hand, God has placed teachers in the Body to help all believers in understanding Scriptural truth (see Ephesians 4:11-16 for example). There is no contradiction between these two principles. Each believer has the Spirit, but each believer needs to learn from each other, including teachers.

This raises another important point. Luther did NOT teach the doctrine of the priesthood of a believer, but the priesthood of all believers. He believed in the importance of the corporate Christian life, not in lone wolf Christians doing their own thing and isolating themselves from the rest of the Body.

When believers cut themselves off from others, from pastors and teachers, and from all that had gone before, including the early church creeds, then they are in real danger of becoming a cult or moving into heresy. Timothy George puts it this way:

While the priesthood of all believers was used by the reformers to buttress an evangelical understanding of the church over against the clericalism and sacerdotalism of medieval Catholicism, the ecclesial context of this Reformation principle has often been eclipsed within major sectors of the Protestant tradition. In my own Baptist family, for instance, it became common in the nineteenth and early-twentieth centuries to speak of the “priesthood of the believer.” The reformers, however, spoke instead of the “priesthood of all believers” (plural). For them it was never a matter of a lonely, isolated seeker of truth, but rather of a band of faithful believers united in a common confession as a local, visible congregatio sanctorum. www.firstthings.com/web-exclusives/2016/10/the-priesthood-of-all-believers

Luther believed that Christians as individuals could share biblical truth with others, but they were part of a corporate community. George quotes the noted Luther scholar Paul Althaus:

Luther never understands the priesthood of all believers merely in the sense of the Christian’s freedom to stand in a direct relationship to God without a human mediator. Rather, he constantly emphasizes the Christian’s evangelical authority to come before God on behalf of the brethren and also of the world. The universal priesthood expresses not religious individualism but its exact opposite, the reality of the congregation as a community.

Of course, Luther did believe that all Christians had direct access to God without recourse to what he polemically called “the tin gods and buffoons of this world.” But for Luther, the priesthood of all believers did not mean, “I am my own priest.” It meant rather: In the community of saints, God has so tempered the body that we are all priests to each other. We stand before God and intercede for one another, we proclaim God’s Word to one another and we celebrate his presence among us in worship, praise, and fellowship. Moreover, our priestly ministry does not terminate upon ourselves. It propels us into the world in service and witness.

In Reformation Thought McGrath puts it this way concerning Luther’s view of things:

There was no place in Christianity for any notion of a professional class within the church which is in a closer spiritual relationship to God than their fellows.

Nevertheless, not everyone could be allowed to act as a priest. Luther’s doctrine of the priesthood of all believers did not entail the abolition of a professional ministry. His fundamental principle was that all Christians share the same priestly status (Stand) on account of their baptism; they may, however, exercise different functions (Amt) within the community of faith, reflecting their individual God-given gifts and abilities. To be a minister is to stand alongside one’s fellow Christians, sharing their status before God; nevertheless, those fellow believers have recognized the gifts of that individual, and invited him or her, directly or indirectly, to exercise that ministerial function amongst them.

And Protestants can also speak of “ordained” leaders or teachers, but in a somewhat different sense than, say, Catholics. As Chase Kuhn writes:

Although Luther insisted on no distinction between Christians as to their status and manner of life before God – all are spiritual – he upheld a clear distinction of office. This distinction was a functional one. Luther believed, as Paul had taught (1 Cor. 12:14-31), that believers were to use their individual office and gifts for mutual service. Those ordained were faithfully to carry on the ministry of the Word and sacrament for the benefit of those who were not so ordained.

Mention can also be made of some differences between the Testaments. In Old Testament times the Spirit was only given to certain individuals for certain tasks, and there was a dedicated priestly cast. Things change somewhat in the New testament. As R. C. Sproul puts it:

In the Old Testament, the Holy Spirit endowed with power only part of the covenant community. At Pentecost, he fell upon everyone assembled, and later he came upon the Gentile converts. The inference drawn by the apostles was that all believers, Jew and Gentile alike, had the same full membership and status within the New Testament body of Christ. The Holy Spirit has now empowered the entire church to participate in the ministry of Christ. That is why Luther held his view of the priesthood of all believers. Luther said that the ministry of the gospel was entrusted to the whole church, not just to a few people. But Luther also understood that the New Testament established regular church offices for the ministry of the Word and sacrament and for the spiritual care of the people.

Robert Benne speaks about the importance and practicality of such ideas, including in how we view such things as work and vocation. He writes:

These understandings had a powerful effect on Western religious and social life. They united clergy and laity into the single body of Christ, activating the laity to take more responsibility for their own spiritual lives; they indicated that lay vocations are just as pleasing to God as clerical vocations; and they opened the Scriptures to millions of devout readers.

These insights also gave great dignity to lay callings – marriage, work, citizenship, life in the church – since the laity are as important in conveying God’s love as the clergy. This gave religious and moral seriousness to ordinary life in the world, but without undermining the callings of pastors and teachers in the church.

In sum, to believe in the priesthood of all believers does NOT mean that there is no authority in the church, no order, no discipline, and no teaching office. Nor does it mean that there are no leaders, pastors and teachers. All believers are one in Christ, but there are differing gifts and offices in the body of Christ.

And it does not mean that any Christian can just run with any bizarre understanding of Scripture they come up with and share it with others. Basic principles of biblical interpretation still apply, and we stand on the shoulders of those who have gone before. We learn from and draw on the wisdom and insights of past and current believers.

So this concept, properly understood, seems to be a fully biblical and balanced position for Christians to hold on to.

9 Replies to “On the Priesthood of All Believers”