What are we to make of the Israel Folau and Rugby Australia settlement?

It appears that they have kissed and made up – sort of. As most folks would have heard by now, the long-running stand-off between star rugby player Israel Folau and Rugby Australia has seemingly come to an end – with a confidential settlement just being reached.

At this point the details are all rather sparse The most that media reports have said was that the settlement has occurred. One report for example put it this way: 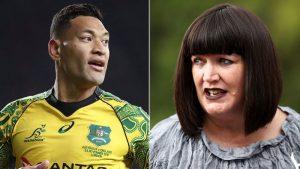 Rugby Australia and Israel Folau have both issued an apology after a confidential settlement was reached. In a joint statement issued on Wednesday, the parties said they did not intend to cause harm to each other. “Rugby Australia and Mr Folau wish each other well for the future.”

The statement said Mr Folau wanted “all Australians to know that he does not condone discrimination of any kind against any person on the grounds of their sexuality and that he shares Rugby Australia’s commitment to inclusiveness and diversity.”

The confidential settlement comes after Folau was sacked following social media posts that said homosexuals, adulterers, fornicators and drunkards were going to hell. The statement said RA “do not in any way agree with the content of the social media post. Inclusiveness is one of rugby’s core values and it welcomes all people to the game, including all members of the LGBTI community.”

Folau was seeking $14 million and an apology in compensation, according to court documents, which included an assessment the Wallabies would have performed better at this year’s World Cup had he been in the team and that he might have been named captain. www.theaustralian.com.au/sport/rugby-union/israel-folau-rugby-australia-reach-settlement/news-story/2935ab2395fcbd35c9b1a9c527f34c82

But because it is a confidential settlement, with both sides saying there will be no further comments, there is a whole lot more that we don’t know than we do know. So we are left in the dark here it seems – at least for now. Whether any more details will emerge in the near future remains to be seen.

In the meantime plenty of questions remain unanswered. One biggie is this: Does Izzy get to play again? Or is he still out of the game? Will RA take him back? And if so, under what conditions? And will they go after him again for any future transgressions?

And while we may not ever know this it seems, but what if he got, say, a $7 million payout? Is that a win for him? But what if he still can’t play? Is it a win then? Or has RA in fact won? RA chief executive Raelene Castle has said their stance was and is correct. As another report states:

Castle said the body had received many messages of support. “It is these messages from members of our community and the wider sports community that leaves us in no doubt that we are doing what’s right,” she said outside court. “Israel’s commentary subsequent to his termination have only reinforced this belief.” www.smh.com.au/sport/rugby-union/rugby-australia-doing-what-s-right-in-defending-folau-lawsuit-castle-20191202-p53fxq.html

So it seems that at least in terms of the PR battles, Castle and RA seem to think that they have won. They are not backing down from their pro-homosexual subserviency. Yes, a settlement is usually a form of compromise, but who compromised the most here? Izzy has now talked about it being wrong to discriminate.

But what does that mean? Does that mean one can no longer share biblical truth because it might offend someone? Or that one must now be forced to accept homosexuals in Christian businesses so as not to discriminate? It seems in the few words spoken here, Izzy may have conceded more ground than RA.

Other, more broad, questions about religious freedom and the like also arise here. One important one is this: Does it take heaps of money to get such apologies and to see such settlements come about? It is one thing if you happen to be wealthy, and have some wealthy and influential backers arguing your case for you.

But what about the little guy? What about those with no or very little resources of their own? Simply paying for legal help can mean an ordinary Joe such as myself would have to mortgage or sell the family home. Most of us just could not have gone as far with something like this as Izzy did.

And what are the motivations of Rugby Australia? I am certain we can quickly rule out any Christian concerns about love and forgiveness here. Spiritual considerations like that certainly did not lead to the “apology” by RA. It was the threat of a $14 million lawsuit hanging over their heads that finally seems to have gotten their attention!

Such is the state of play nowadays. Far too many corporate giants – and others – have fully bought the entire package of political correctness, woke politics, and secular left agendas. They will go after anyone who dares to rock the boat, think independently, and refuse to bow the knee.

Therefore most ordinary folks will just have to suffer. They will not have the clout, the resources, the backing, and the publicity that someone like Izzy has. And I happen to know of a number of such folks who are now under the hammer. Their stories are not public, but what they have gone through is very much like what Folau has experienced: simply stating their non-PC views in their own time on their own personal media pages.

For that they are being picked off one after another. Some are still in the midst of all this, seeking to fight back. Many others have just accepted their fate and tried to move on. But as I have written before, it will soon get worse for all of us who dare to remain faithful to Christ and to truth: billmuehlenberg.com/2019/12/03/warning-do-you-really-trust-god/

And we know that the activists will never stop in pursuing their causes. They will keep targeting anyone who does not get on board with their lifestyles and agendas. They will keep targeting folks like Folau. Indeed, just yesterday one homosexual activist and serial pest said he is going after Folau for “homophobia” and damages of $100,000: www.starobserver.com.au/news/national-news/folau-suffers-burns-in-dramatic-new-twist/190752

So this particular story is NOT over, nor are the culture wars. They will keep on going. It is possible more clarity about the settlement will emerge over the next few days, but until then, plenty of questions remain. I am not even sure if I can say at this point who was the winner here – if anyone.

23 Replies to “Questions about the Israel Folau Settlement”