Jesus denounced the Pharisees, but there are many Christian Pharisees with us today:

If you are a good Bible-believing Christian, you would know that the Pharisees who are so often mentioned in the Bible were basically the bad guys. They were a thorn in the flesh to Jesus and his disciples. They utterly missed it when it came to knowing who God was, what his will was, and how God’s people should act.

Thus evangelicals and others rightly look askance at them and see themselves as completely opposite to them. But not so fast here. It sadly may be the case that there are many evangelical Pharisees among us. In other words, we should not be too quick and too certain in assuming that the Pharisees are simply “out there”. They may well be in our midst. 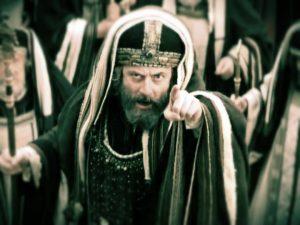 And anyone involved in any sort of public Christian ministry, or who makes use of things like the social media, knows full well that there are plenty of these evangelical Pharisees around. Numerous examples of this abound. But before offering some of them, let me make it clear just what is being talked about here.

A few quick online definitions can do for starters. One says that a Pharisee is “a self-righteous or hypocritical person.” And another: “The Bible describes the Pharisees as a community or sect of ‘separatists’ that were known for their self-righteous religion and pride.”

If we want a more formal and academic definition, Stephen Westerholm in the Dictionary of Jesus and the Gospels (First Edition) says this:

Characteristic of the Pharisaic position was their adherence to a body of traditional material handed down “from the fathers,” which defined correct behavior in a number of ways and which represented both an interpretation of and a supplement to Pentateuchal Law. In the Gospels Pharisees are generally (though not quite universally) depicted as opponents of Jesus, critical of his behavior, hostile in their questions, malicious in their deliberations. In turn, their piety is attacked as hypocritical, their spiritual leadership is declared bankrupt, and they are charged with leading the nation to its doom.

So some clear themes emerge here: a Pharisee is self-righteous, is really religious, is quite hypocritical, and looks down on others, perceiving himself as being morally and spiritually superior. Ever run across Christians like that? Sadly, I do all the time.

Let me mention two groups of Christians who fit this description. One is a small group of pro-life Christians who spend as much time attacking other pro-lifers and other Christians as they do abortion. They are abortion purists who basically insist that we must stop all abortions at once – end of story.

They argue that it is a waste of time – and even evil – to try to stop abortion incrementally. They are ‘all or nothing’ when it comes to stopping abortion. Thus they despise those pro-lifers who may be working on banning late-term abortions, or establishing personhood legislation, or whatever.

Never mind that all pro-lifers want to end ALL abortions, but these incrementalists are also realists and know that in a fallen world, some things we have to work on bit by bit, as we work toward the end of seeing all abortion stopped. But such people are simply ‘selling out,’ in the eyes of these Pharisees.

It is obvious, however, that when you insist on all or nothing, what you end up with is nothing. I would far rather have some babies saved today, more saved tomorrow, and more the next day, by piece-meal legislation, than none at all saved with the approach of the gung-ho purists.

But if you want much more detail on this, and why I reject these pro-life Pharisees, see this article: billmuehlenberg.com/2016/04/03/purists-politics-presidents-pharisees-dead-babies/

A second obvious example of Christian Pharisees in action is now all too apparent. Indeed, one does not need a calendar to know that Christmas is upon us: one simply notes all the Scrooges, the Pharisees, the self-righteous, and nutters who emerge at this time of the year.

They are absolutely convinced that Christmas is a pagan festival, fully of the devil, and no true Christian should have anything to do with it. Thus they are on search and destroy missions, hunting down any Christian that dares to say “Merry Christmas” and celebrate the birth of our Lord Jesus.

I get these guys coming out to judge and condemn me and my friends every year. They are as predictable as they are despicable. They are utterly filled with pride and self-righteousness as they attack others who dare to think differently. And they are the least humble and teachable folks around. They refuse to actually study and learn.

They instead seem to delight in ignorance. They take pride in not learning, and in not being open to another point of view. They have this idea that the more closed-minded, ignorant, and uninformed they are, the more spiritual they are. Hmm, they are just like the Pharisees, in other words.

I have spoken often before about the sin of an unteachable spirit, and the twin sin of pride that always goes with it. See here for example: billmuehlenberg.com/2017/04/01/perilous-pitfalls-unteachable-spirit/

As an example of how unteachable and proud this person is, she said she only gets truth from the Bible, not from what men say. To which I replied:

If we should listen to no man, and only God and his word, then why are you carrying on and on here? Unless I am mistaken, you are a mere man as well, so we should fully ignore you according to your own words. If you prefer not to read my piece and actually learn something, feel free. But I can assure you that there is nothing godly or spiritual about remaining dumbed down and living in ignorance. Nor is there anything spiritual about coming here and judging and condemning us over these things – the Apostle Paul explicitly warns against such behaviour. Try reading Colossians 2:16 for starters.

And I have often now provided the biblical, historical and theological reasons why Christmas is NOT some pagan festival to be avoided like the plague. See this piece for example: www.billmuehlenberg.com/2013/11/12/christmas-of-pagan-origins/

See this as well: billmuehlenberg.com/2015/11/28/you-know-it-is-christmas-when-all-the-pharisees-come-out/

And for all the Christian nutters who actually believe having a Christmas tree is specifically condemned by Jeremiah himself, see this piece: billmuehlenberg.com/2019/09/29/difficult-bible-passages-jeremiah-103-4/

But I once again had more of these Pharisees coming to attack me. One of them picked a fight with me yesterday while I was sitting in a Perth airport, waiting to go home to celebrate Christmas with my family. When I finally made it home I found her STILL arguing about this.

Of course she utterly refused to read the articles I provided to correct her erroneous thinking. Remember, the Pharisees are not in the slightest interested in actually learning anything. Their minds are already made up, shut closed like a steel trap. And they think a refusal to actually think and learn makes them more holy! Go figure.

They will claim they fully researched the matter, so have no further need to even consider another point of view. Yeah right. “Research” for these folks means they have watched a few nutjob conspiracy theory YouTube videos, and they think that makes them experts. I have written about that foolishness as well: billmuehlenberg.com/2019/07/30/no-that-is-not-research/

So the gal attacking me yesterday made it clear what a superior Christian she is to the rest of us. She looked down on us for not being as pure and holy as she is. And she showed her Christian love and grace by unfriending me – but not before making it clear that we are all a pack of Lucifer worshippers!

I kid you not! Yes, she certainly has pegged me correctly. She obviously knows that I engage in bloody ceremonies in my living room; I routinely sacrifice babies on satanic altars in my back yard, and I regularly perform acts of black magic and the like – especially at this time of the year. Yep, she knows me so very well.

Good grief. As I keep saying, there is only one word for all this: she is a Pharisee. She is utterly self-righteous in her own eyes and she looks down upon and despises mere Christians like us. Feel the lurve baby. We are so blessed to have believers like you around to keep us on the straight and narrow.

Just like Jesus was so happy to have the Pharisees around to show us the true meaning of pleasing God.

5 Replies to “Are You a Pharisee?”