What do they put in the drinking water in Hollywood?

As the old saying goes (often attributed to Chesterton): ‘When men choose not to believe in God, they do not thereafter believe in nothing, they then become capable of believing in anything.’ Yep, when we ditch our wise creator for our own understanding and direction, we get into all sorts of nutjob stuff.

Examples of this are endless, but even more so when you enter the murky waters of Hollyweird. Common sense and rationality are not exactly hallmarks of the denizens of this Los Angeles hotspot. Usually every loony idea imaginable will be found there, and the more bizarre the better it seems. 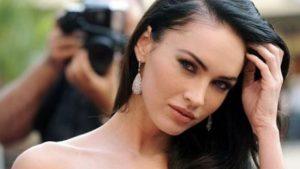 Let me offer just one case in point. I refer to mega-actress Megan Fox. One new article about her makes it clear that she is on – or from – another planet. More on this in a moment. I looked up more stuff about her and this embracing of the bizarre seems to be a habit of hers.

And as the saying above implies, there is a direct relationship between the rejection of God and the rejection of reason, morality and sanity. It seems she actually had a religious upbringing, but she rebelled against it big time. As she said in one interview about a Christian school she had attended while a teenager:

“They had right-wing conservative teachers teaching Bible class. They’d tell us how abortion was wrong, how evolution was wrong, how sex was wrong.” She ended up “rebelling against everything that I was ever taught or told.” Yeah, that much is apparent.

Consider the recent piece on her found in one famous gossip mag. The headline should be enough: “Megan Fox on Her Children’s ‘Vegan School’ — and Why She’s Teaching Them Plants ‘Have Feelings’.” Oh dear. Well here goes – here is part of the article:

For Brian Austin Green and Megan Fox, supporting their sons in whoever they are is a no-brainer. . . . Green — who’s also dad to 17-year-old son Kassius Lijah, from a previous relationship with Vanessa Marcil — told PEOPLE the couple “just encourage” their kids to be their true selves, whatever that looks like. “We don’t encourage them to be themselves, we just encourage whoever they are,” said the 90210 star, 46. “I know for me, [the more time passes,] the more I really realize and am okay with the fact that they are people.”

The involved parents are also teaching their children to be environmentally friendly. As Fox explained to PEOPLE, “We send them to an organic, sustainable, vegan school where they’re seed-to-table, they plant their own food. They grow it, they harvest it and they take it to local restaurants to sell it, so they understand how all of that works.”

“I’m very specific about never harming animals,” she added. “We don’t step on ants; we don’t do things like that. We don’t rip flowers out of the ground, because we think they’re beautiful. I teach them that plants are sentient beings — they have feelings, thoughts and emotions — so that’s what we’re doing.”

The Jennifer’s Body actress revealed to reporters at the event that despite their good intentions, accidents happen, even though their kids are “really good about” not hurting Earth’s crawliest creatures. “My son accidentally stepped on a roly-poly once and he was devastated, and we had a full funeral for it,” Fox said. “We did a ceremony, we buried it, we lit sage, we released him back. So they’re very involved.” people.com/parents/megan-fox-teaching-sons-to-be-themselves-brian-austin-green/

Good grief. It appears she is open to abortion, but hands off those poor plants! We don’t want to offend those delicate dandelions and all that conscientious crabgrass. And watch out for those sentient slugs. What is wrong with this couple? Simply considering some of the names that were inflicted on their sons should tell us all we need to know about this really hip couple: Journey River and Bodhi Ransom. Really?!

I don’t mean to pick on Fox, but, um, well, she seems to be the gift that keeps on giving. Indeed, like so many from her part of the world, she seems to be almost certifiable. Consider two more episodes from this actress. No surprises that this is the same mom and dad team who think their sons look peachy in dresses:

TMZ’s Dax Holt praised Green for allowing his son to wear dresses, saying he thinks it’s “cool” and “I don’t understand the big deal of it.” “I don’t care” what critics say, Green replied. “He’s four, and if he wants to wear it, then he wears it…If he wants to wear a dress, awesome. Good on him, you know?”

Fox began defending the couple’s parenting in 2016, when it was revealed they let then-three-year-old Noah wear girls’ clothes. The actress said because she was raised in an “oppressive” Pentecostal household, she leans “left of that now.” “Noah wears dresses so there are no rules – you can be whatever you want to be in my house,” she told Jimmy Kimmel. www.lifesitenews.com/news/megan-fox-and-her-husband-let-their-4-year-old-son-wear-dresses-there-are-n

One more – and this one really is bizarre:

Megan Fox used her psychic abilities for Chelsea Handler in the latest episode of the Netflix talk show series Chelsea. The 30-year-old actress informed Chelsea, 41, on Friday’s episode that the spirit of her aborted fetus communicates to the talk show host via her beloved dog Chunk.

‘I do feel like the dog was chosen for you by a family member that’s crossed over that communicates to you through the dog, that helps the dog nurture you at times when you are suffering. The dog can sense that,’ Megan said. The pregnant actress then asked Chelsea if her dog communicates its disapproval of her behaviour. ‘He gives me the side eye a lot,’ Chelsea replied, especially when she comes home late and a ‘little too s*** faced.’

‘There’s a soul that’s around you and around your dog that was a child that was conceived at some point that’s yours. That’s over there with your mother and they do sort of watch over you through the dog,’ Megan said while claiming she’s not a psychic. ‘That’s specifically what I did get. There is a child spirit and that you should never feel like you f***ed up or you made a bad choice. Because that karma will always be settled in the future either in this lifetime or the next lifetime,’ Megan added. www.dailymail.co.uk/tvshowbiz/article-3623154/Megan-Fox-believes-Chelsea-Handler-s-aborted-fetus-communicating-comedienne-pet-dog-Chunk.html

Wow – just wow. Yep, they will believe in anything all right. Again, she is not alone in all this. In addition to so many celebs running with every bit of moonbatterry around, plenty of non-celebs are also into this sort of stuff. And the simple truth is, it takes a lot more faith to believe some of this foolishness than it does to believe in the one true God and his word.

Clearly Megan is a prime example of those who have lost their way big time. Needless to say, we need to pray for her. Maybe one day she will return to the faith she has so decidedly spurned. And pray for those poor kids of hers as well. They are in for one wild ride with parents like that.

6 Replies to “Not So Crafty as a Fox”