Thoughts on the big win for Boris Johnson in the UK:

According to exit polls, it looks like Boris Johnson has won the UK general election and has won it massively. The early Christmas election was as much a referendum on Brexit as anything else, with Johnson promising to finally get it resolved by the end of the year. And now the UK voters have given him the green light to get it done. 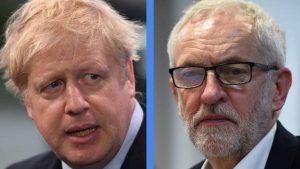 This was the third such election in five years, and the 40,000 polling stations have just closed (at 10pm London time). The 55-year-old Johnson was favoured throughout the six-week campaign. And it really was a Brexit election. Bear in mind the Brexit dates: back in June 2016 a referendum was held in which the people voted 52% to 48% to leave the EU. It still has not been implemented.

The numbers look like this: There are 650 seats in the House of Commons, so 326 seats are needed for a majority. The Conservatives had held 298 seats and now may have 368 – a gain of 70 seats, giving them an 86-seat majority! Margaret Thatcher had over a 100-seat majority in her first election. But this is pretty close to it.

It is a massive victory for Johnson, giving him a clear working majority and a clear mandate to govern. Labour had held 243 seats, and may now hold 191 – a loss of over 50 seats, and their lowest number since 1935. The Liberal Democrats seem to have gone from 21 down to 13. The Greens it appears remain with just 1 seat.

The Scottish National Party seems to have increased its numbers, from 35 to 55 seats, which may lead to more pressure for an independence vote. They will want another referendum on this, but Johnson has already said it is not going to happen.

With non-compulsory voting, a large percentage of the 46 million eligible voters seem to have come out to make it clear that Brexit must be finalised and Labour was just not wanted. Jeremy Corbyn was bad news indeed and deeply unpopular. The hyper-left socialist would have spelled disaster for the UK.

His anti-Semitism was bad enough, and a minority government under his reins would have been very bad indeed for the country and the world. Traditional Labour voters just did not like or trust Corbyn. They knew he did not represent their values. Thus many long-term Labour voters in the Midlands and the north ended up voting for the Conservatives.

This is his second loss in a row, and his only choice now will be to resign. The Labour Party needs to have a real rethink of its beliefs, strategies and policies as well. It went way too far to the left with Corbyn. And with the American presidential elections due in a year, the hard left-leaning Democrats may need to pay careful attention here. Yes the UK is different from the US, but Sanders and all the other Democrat leftists ought to take notice.

If the exit polling is correct, the Conservatives won around 46 per cent of the vote, while Labour only got 33 per cent – a 5 ½ percent swing to the Tories. This is a very massive win indeed, and Labour will be licking its wounds for some time to come.

The early voting results in Newcastle and Sunderland – both parts of traditional Labour heartland – saw very significant moves away from Labour and to the Conservatives. Yes, as expected, Labour won both seats, but with massive (10 per cent) swings against them. If this trend continues, it looks like the exit polls were pretty accurate indeed.

Of interest is the issue of Muslim candidates. An earlier article had predicted that as many as 24 Muslims may win seats in this new Parliament. The piece says in part:

The Labour Party has given ticket to 33 Muslim candidates with outright or slim chance of winning. Of these, around 16 look comfortable to win their seats against the Tory opponents, unless there is a big upset on the Election Day. The number of Muslims on Conservative seats will double from just three in 2017 to around six or more on Thursday’s election. The Conservative Party has given tickets to 22 Muslim candidates but only around five are considered to be on safe seats. www.thenews.com.pk/print/581602-record-24-muslim-mps-likely-to-be-elected-to-uk-parliament

As I have written before, Johnson is not quite a consistent conservative. While he will be strong on Brexit, he has not been strong on various conservative cultural values, such as homosexuality. But see my earlier piece for more on this: billmuehlenberg.com/2019/07/24/on-boris-johnson/

In the US, the UK, and Australia, the major parties of the left that at one point could claim to represent the working classes have been moving further and further to the left, alienating many traditional voters, including plenty of workers. In each case the voters have spoken – they are just not keen on this lurch to the left.

Note: this article is mainly based on the exit polls. While such polls have been fairly accurate in the past, we await the actual counting of votes. But if this polling is even close to correct, it is a big win indeed for Johnson and the Conservatives, and a major rebuff to Corbyn and Labour. If things do change dramatically in the hours ahead, then of course I will need to make some revisions here.

11 Replies to “Big Win for Boris and Brexit”