Further reflections on the big win for Boris and Brexit:

The people of the UK have spoken, and I like what they have been saying. They made it clear that the lunacy of Corbyn and Labour was not wanted, nor was more obfuscation and delay on Brexit. Boris Johnson took a big gamble on calling this election, and it paid off big time. Let me look at Thursday’s election in more detail.

The results are now officially in for the 650 seats in the House of Commons, with the Conservatives romping home with massive gains: 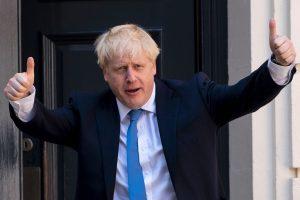 A few more details: the Brexit Party did not win any seats, and the Greens remain with just one seat. The Liberal Democrats, which is a committed remain party, lost big time. It even lost its leader, and they will have to regroup big time. The Scottish Nationalist Party did very well, and will look for a second referendum on independence, something Boris will not countenance.

Voters in droves rejected the radical leftist and socialist policies of Corbyn and Labour. Even many traditional Labour voters turned on him and the party. Many wanted Brexit to be finalised, even if they may not have fully supported everything about Johnson. He acknowledged these voters in his acceptance speech.

Indeed, the workers have revolted big time. Socialists and Marxists have never really cared about the working classes: they just use them for their own ends. English workers got sick and tired of the leftist elites taking over the Labour Party. And the election results proved this conclusively. As Brendan O’Neill just wrote:

The ‘red wall’ has fallen. Brick by brick. Almost every bit of it. Seats held by Labour for decades have been seized by the Tories. To me, this is the most exciting thing in this extraordinary election. It feels almost revolutionary. Working people have smashed years and years of tradition and laid to waste the nauseating, paternalistic idea that they would vote for a donkey so long as it was wearing a red rosette….

Labour embraced an agenda of identity politics over community values, EU neoliberalism over British patriotism and radical virtue-signalling over the ideals of family, work and togetherness. And its working-class base said no, no, no. This is a warning to the entire political class. Do not take voters for granted. Do not insult them. Do not demean their democratic voice. blogs.spectator.co.uk/2019/12/the-fall-of-labours-red-wall-is-a-moment-to-celebrate/

Or as Caroline Overington has written today:

Labour no longer means working class. Labour now means the inner-city lefties, with a tinge of trendy, and a touch of green. There’s really no other way to read the results coming out of Britain. The working class has deserted Labour. People who have never in their lives voted anything other than Labour – whose parents, and grandparents only ever voted Labour – have swung conservative. Nobody can quite believe this, but Boris Johnson’s team has scooped up Blyth Valley. The Conservatives have also taken the west Cumbrian seat of Workington. These are seats that Labour has held since … well, since before the Beatles were a thing. www.theaustralian.com.au/commentary/uk-election-2019-labour-now-means-innercity-lefties/news-story/f9465d7476f060d1a4b216898c3f89c8

Yes, Boris has smashed the red wall. And recall that in the UK folks are used to having the nation ruled with slim majorities, hung parliaments, and coalition governments. Now we have the Conservatives with a huge majority that can govern in its own right and do what it wants to do with much less resistance than normal. It was a very big win for Boris, who just a year ago was sitting on the back benches. Now he has a five-year term to get done his agenda.

Where to now for Labour, with so few seats won since 1935? Corbyn is now toast, and even though he spoke about hanging around for a while, it is likely his head will roll real soon as Labour licks its wounds, does some soul-searching, and tries to come up with a real leader who might offer effective opposition leadership.

As to the bigger picture: except for the People’s Republik of Victoria in Australia (where I sadly happen to live), many parts of the West are now repudiating the lunar left and its radical agendas. Instead they are turning to conservative governments. Even if one does not fully support a Trump, a Morrison, or a Johnson, they are far, far better than a Clinton, a Shorten, or a Corbyn.

A quick word about anti-Semitism. I have had folks try to claim that this was not a problem for Corbyn or Labour. Baloney. It was and is a massive problem. All that these sceptics need to do is read carefully the 53-page submission put out by Jewish Labour Movement. It is a damning indictment of Corbyn and Labour: www.scribd.com/document/438367082/Redacted-JLM-Closing-Submission-to-the-EHRC

The document makes it crystal clear that “Corbyn himself has repeatedly associated with, sympathised with and engaged in anti-Semitism.” It also says this: “47% of Jews who live in the country say they will seriously consider leaving if the Labour Party under Jeremy Corbyn gets into power. 87% of Jews consider him to be an anti-Semite.”

The JLM submission offers all the documentation anyone except the true believer needs to see he is fully entrenched in anti-Semitism. His hatred of Israel, his ties with Hamas, his defence of terrorism, etc., are also clear indicators of where he is at. Good riddance Jeremy.

So in this election, just as when they voted for Brexit in 2016, the working- class has risen up in revolt against against the liberal universalists who control both their party and British culture. They also despised Jeremy Corbyn. They perceived that he posed a security threat to the country through his backing for the IRA and Hamas, they didn’t believe his ludicrous promises of unlimited welfare spending, and they viewed his supporters as nasty, thuggish and antisemitic.

The antisemitism issue had got through to them. This was thanks to the dramatic warning by the Chief Rabbi, Ephraim Mirvis, that the poison of Jew-hatred was being spread from the top of the party, and also to the constant revelations of the eye-watering antisemitism by party members. www.melaniephillips.com/british-working-class-saves-britain-jews/

The political outcome was certainly very important. But as I say after every important election: whether the “good guys” win or lose, at the end of the day politics is not everything. Boris Johnson will not save the UK. Trump will not save America. Morrison will not save Australia. Make no mistake: I am very glad and thankful indeed that all three are in office – far better than the alternatives.

When a socialist, globalist, anti-Semite and his party get trounced in a national election, that is a good thing indeed. But politicians cannot save us – only Jesus can do that. Sure, as believers we are citizens of two kingdoms: we have our heavenly citizenship, but we are also called to be salt and light in this world.

So we seek for good government and good policies. We hope that evil will be constrained to some extent. But we also realise that no laws and no governments can change the human heart. That is where the real action is at. Only God can change hardened, self-centred hearts into soft, loving, other-centred hearts.

So we need to work on both fronts simultaneously: we need to seek for godly governance, or at least wise and moral governance, but we also must proclaim biblical truth and share the gospel. Only a fully changed life, brought about by a spiritual transformation, can properly bring about the outcomes we seek.

By all means, let us work and pray that our leadership is at least somewhat reflective of biblical principles. Let us vote out clearly evil candidates and parties and seek at least the lesser of evils – which is about all we can hope for in a fallen world.

But never forget that only God can change the human heart. And that is something that we all need. As Soviet dissident Alexander Solzhenitsyn once put it: “The line separating good and evil passes not through states, nor between classes, nor between political parties either – but right through every human heart – and through all human hearts.”

Am I glad that Corbyn has been turfed out? Absolutely. But this is only a temporary reprieve for what really ails us. Widescale revival and reformation is the real order of the day. And that takes much more than going to the ballot box once every few years.

24 Replies to “More on the Boris Landslide”