The activists are now out to destroy Christmas as well:

If the rainbow warriors have their way, nothing, I repeat, nothing, will be able to elude the radical homosexual juggernaut. The militants do not want anything to escape the clutches of their nefarious agenda. The activist attempt at the gayification of everything is now even reaching into Christmas – the celebration of the birth of Jesus Christ. 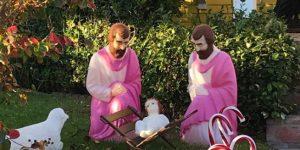 Nothing is sacred for the pink mafia. And given that they fully realise that the last obstacle to their complete hegemony is the Christian church, it is no surprise that they are going after it full throttle. And targeting Christmas is a big part of this.

Let me offer you a number of recent examples of this from around the world. I begin in Brazil with this shocker:

Netflix has just released a “gay Jesus” Christmas special called The First Temptation of Christ. The Brazilian comedy group Porta dos Fundos (which literally translates to “back door”) appears to have a real hang-up about our Lord and Christianity in general. Last December the group released The Last Hangover on Netflix, a movie that blends Christ’s Last Supper with his disciples and The Hangover into a night of drunken debauchery where Jesus disappears. This year, in this new Christmas special, Jesus turns 30 and brings his gay boyfriend home to meet Mary and Joseph. Already, 1.14 million Brazilians have signed a Change.org petition asking Netflix to remove the movie. www.breitbart.com/entertainment/2019/12/12/netflix-releases-gay-jesus-christmas-special/

Now over 1.6 million people have signed the petition, and you can too: www.change.org/p/netflix-especial-de-natal-porta-dos-fundos

And then in America we have the Hallmark Channel – a once family-friendly outfit – bowing to pressure from the militants to have a homosexual Christmas show:

Bill Abbott, CEO of Crown Media Family Networks, Hallmark’s parent company, said the network is “open” to the idea of making the TV Yuletide gay. “Have you talked about incorporating stories about same-sex couples at Christmas?” The Hollywood Reporter asked in an episode of its TV’s Top 5 podcast recorded November 15. “We’re open to really any type of movie of any type of relationship,” Abbott replied. Hallmark is the leading name in holiday entertainment. www.advocate.com/television/2019/12/04/hallmark-open-making-gay-christmas-movies

A petition against this has already reached nearly 45,000 signatures: lifepetitions.com/petition/tell-hallmark-no-lgbt-christmas-movies

And a good news story is that Hallmark has pulled a homosexual ad after pressure from conservative groups:

The Hallmark Channel has pulled a commercial featuring brides kissing during a same-sex wedding ceremony, just days after a conservative group launched a campaign calling on the network to pull the ad. The commercial from the wedding planning website, Zola, features a lesbian couple celebrating their nuptials. The ad first debuted on Hallmark on Dec. 2. Earlier this week, One Million Moms, a division of the American Family Association that claims its mission is to “stop the exploitation of our children, especially by the entertainment media,” launched a petition urging Hallmark to stop airing the commercial and other LGBTQ content. www.foxnews.com/lifestyle/hallmark-pulls-zola-commercial-brides-kissing

And then in the UK it seems that Santa has gone gender-neutral:

A viral Facebook post caused a festive controversy on the social media platform when a mom claimed that she received backlash for not using a “gender-neutral” term for Santa Claus, sparking a heated debate. The story originates from an unnamed mom in Plymouth, England, who claims that she was shamed on a Facebook group after referring to Santa Claus as Father Christmas, the Plymouth Herald reports. The woman told the outlet, “Santa is now seen as gender-neutral. I was only referring to the book ‘Father Christmas’ by Raymond Briggs, but it’s left me a little confused/on edge about what we are aloud [sic] to say.” www.foxnews.com/lifestyle/santa-gender-neutral-mom-shamed

And now we have homosexual nativity scenes depicting Jesus with two dads:

One image of a gay “nativity scene” depicting “Jesus” with “two dads” has been making waves around the internet. The image, which was published by Cameron Esposito, an LGBTQ activist on Twitter, has conservative Christians up in arms over the blasphemy and idolatry of it. Apparently the picture was taken at the home of one of Esposito’s neighbors — apparently the entire neighborhood is gay. reformationcharlotte.org/2019/12/11/gay-nativity-scene-depicting-jesus-with-two-dads-makes-waves-around-the-internet/

It seems that homosexual nativity scenes are just peachy, but normal ones are now verboten:

An Oklahoma public elementary school removed its third-grade live Nativity scene from its annual Christmas production after receiving a threatening letter from an atheist group. www.breitbart.com/politics/2019/12/11/atheist-group-bullies-public-school-into-cutting-3rd-grade-live-nativity-from-christmas-show/

In Australia things are no better. Consider these last two items. The first comes from Sydney:

Santa has landed in Sydney’s Erskineville, but instead of a white beard and black boots, this Santa wears 20cm heels and fake lashes. And they are offering a twist on the traditional Christmas photo. Oliver Levi Malouf has transformed the role of Santa Claus into a drag queen, taking time to apply glitter, lashes and lipstick in addition to the big red costume. The Imperial Hotel in Erskineville draws big crowds for its drag shows and this season, it’s introducing Christmas queens. www.msn.com/en-au/news/australia/theres-a-new-santa-in-town-and-shes-in-drag/ar-AAK4K4d

Finally, consider what appears to be a homosexual Santa in an Australian toy store in Melbourne. Toy Kingdom in Eastland in Ringwood has a large rainbow Santa in its display window. As far as I could ascertain, there were six colours – which accords with the homosexual rainbow.

I went in and asked what gives with Santa’s red suit going missing, and the young gal said, “Its rainbow now.” She did not reply when I asked her why the change was made. I wonder if other Toy Kingdom stores also have this. If you see one, please let me know thanks. It seems we now may have a sodomy Santa – for children!

These are just some examples of the homosexual war on Christmas. And this has been going on for a while now. As but just one case from a few years ago we had more assaults on our children and on Christmas:

Get ready to see Santa Claus in a new (and refreshingly diverse) light this holiday season, courtesy of a forthcoming parody children’s book. On March 28, publisher Harper Design announced plans to release Santa’s Husband, which re-casts Kris Kringle as a black man in an interracial, same-sex relationship. Slated for an October release, the book will follow Santa’s life in the North Pole, except in this version, he’ll have a white husband who fills in for him at shopping malls around the world. www.huffingtonpost.com.au/entry/santa-claus-gay-children-book_n_58e2a35be4b0f4a923b0fa79?ri18n=true

The activists want everything to fall under the reach of the rainbow agenda. Nothing is off limits, and Christians are especially being targeted – as are our children. And they kept insisting that they just wanted to be able to do their own thing in the privacy of their own bedrooms. And they told us nothing would change when homosexual marriage is legalised.

Yeah right. This is the complete transformation of society as they attempt to remake absolutely everything in their own hyper-sexualised image.

Obviously the Christian celebrates the birth of Jesus at Christmas. It is not about Santa, commercialisation, and so on. So my article is not a pro-Santa piece, it is a pro-Jesus piece. If Christians want nothing to do with Santa and so on, that is up to them.

But what I do NOT accept are the rather foolish and unhelpful attempts to paint Christmas as some sort of pagan festival. Um, it is not, as I have carefully documented elsewhere. So those who want to run with that stuff are advised to take it elsewhere. See here: billmuehlenberg.com/2013/11/12/christmas-of-pagan-origins/

14 Replies to “The Homosexualisation of Christmas”