Is matter all that matters? Is nature all there is?

Theists and atheists have plenty of debates over issues like ultimate reality, freedom, morality, and personhood. With philosophers and theologians over the centuries offering us millions of words on these subjects, I must radically narrow my focus here. I will do so by running with two things that I wish to draw your attention to. The first is an article that appeared exactly eight years ago.

On New Year’s Day 2012 a provocative piece entitled “Why you don’t really have free will” was published. It was written by American atheist and biologist Jerry Coyne. usatoday30.usatoday.com/news/opinion/forum/story/2012-01-01/free-will-science-religion/52317624/1

The idea that free will is illusory may come as a surprise to most folks. But this is standard fare from the new atheists. Their precommitment to philosophical naturalism means they are usually hardcore determinists, often denying the reality of not just free will, but consciousness, the mind, and even self. After all, we are just a collection of “selfish genes” to use Dawkins’ words. 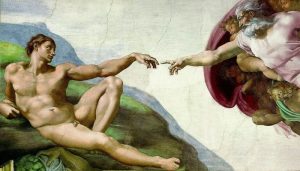 And yet in such an implausible reductionistic system, they still go on as if it makes sense to speak of making moral choices. In Coyne’s case, even though he refers to humans as mere “meat computers,” he says we nonetheless should “go about building a kinder world”.

Really Jerry? Kinder in what sense? And by what standard? Kinder presupposes some sort of overarching, objective moral standard, but you just spent an entire column telling us there is no free will, and therefore morality is really a mirage. All we have are “environmental factors that can influence the brains of not only the criminal himself, but of other people as well.”

Hold on there, Jerry. If a herd of elephants go on a stampede, killing dozens of humans, we do not blame them and hold them morally culpable. It is the same here. If I decide to kill Coyne or rape someone, I am just programmed to do so – I am not blameworthy or evil. I just do what my genes demand of me.

Sorry, you can’t have it both ways Jerry. If I am nothing more than a slab of meat, predetermined by my genetic makeup, perhaps I am programmed to be evil, not kind. Indeed, we would expect selfish genes to act selfishly. So talk of seeking a “kinder world” is pure gibberish under your worldview.

The second thing I wish to do here is highlight a new set of books. (Yes I know, for me to highlight books may come as a surprise to some of you!). A new 6-volume set of books on philosophy and theology by John Lennox and John Gooding deserves a mention here. The series is entitled The Quest for Reality and Significance (Myrtlefield Trust, 2018-2019).

The volumes make up nearly 2000 pages, and cover a number of key areas, such as the nature of ultimate reality, epistemology, the importance of humanity, the search for meaning and purpose, ethics, the problem of suffering, and so on. The authors discuss the issues of atheism, science, determinism, personhood, and freedom on a number of occasions.

To whet your appetite for these volumes, let me quote from some of them on these topics. In volume 4, Doing What’s Right, they have a chapter on “The Source of Objective Moral Values.” In it they look at some deterministic theories such as social Darwinism and sociobiology.

And they assess the thinking of people like Herbert Spencer, Francis Crick, Jacques Monod, Edward O. Wilson, and Richard Dawkins. They ask how morality can be based simply on one’s genes:

An obvious difficulty presents itself. If a man is nothing but his genes, and his genes control his moral behaviour, how can a man ever be blamed for doing wrong, or praised for doing right? And what extraordinary promoters of morality genes must be when, on this theory, the combined genes of Europe, Asia, Australia, Africa and America caused the Second World War….

The evolutionary model has always found it difficult to account for altruistic behaviour, since such behaviour would naturally seem to make it harder, not easier, for the race to survive. . . . How then can evolution explain the deep-seated moral conviction, that we have a duty to support the weak, the handicapped, the ill, the aged, and not only those of our kith and kin, but of people generally, even though it involves a serious drain on our resources, and makes the survival of the race more difficult and less likely?

Volume 1, Being Truly Human, has the most to say on these matters. In it they assess behaviourists such as Pavlov and B. F. Skinner, and say this:

Of course, if the brain is nothing but matter and runs according to strict invariable laws; and if mind and brain are simply two terms for exactly the same thing, then man is not free, his thoughts are determined and his actions are predictable. But if that is so, there is an end of all morality. Man is a mere machine. And in that case you would not blame or punish a man for murdering your wife any more than you would punish a car for bursting into flames and burning her to death….

But we need not take behaviourism’s diagnosis seriously; comparatively few atheists accept it nowadays. And few behaviourists themselves live what they preach. If someone robs them, they hold the thief morally responsible, blame him and, if need be, prosecute him.

In this volume the authors look further at various reductionistic theories of what it is to be human. They quote the English theoretical physicist and Christian theologian John Polkinghorne:

Thought is replaced by electro-chemical neural events. Two such events cannot confront each other in rational discourse. They are neither right nor wrong. They simply happen. If our mental life is nothing but the humming activity of an immensely complexly-connected computer-like brain, who is to say whether the programme running on the intricate machine is correct or not? Conceivably that programme is conveyed from generation to generation via encoding in DNA, but that might still be merely the propagation of error. If we are caught in the reductionist trap we have no means of judging intellectual truth. The very assertions of the reductionist himself are nothing but blips in the neural network of his brain. The world of rational discourse dissolves into the absurd chatter of firing synapses. Quite frankly, that cannot be right and none of us believes it to be so.

Ask an atheist what ultimate powers were responsible for bringing him into the world, and what ultimate powers will cause his eventual demise, and the atheist will say (though in much more sophisticated language) exactly the same as the ancient idolater. He will say it was, and will be, the fundamental forces and processes of nature: energy, the weak atomic power, the strong atomic power, electro-magnetism, gravity, the laws of physics, chemistry, biochemistry, physiology, and so forth….

And the striking, but melancholy, fact is this: the atheist is a warm, feeling, purposeful, intelligent human being. But these forces which produced, and one day will destroy, him, his feelings, loves, purposes and intelligence are, all of them, by the atheist’s own definition, non-rational, non-sentient, mindless and purposeless.

I trust that by now you get the point, and see the many shortcomings of naturalism, reductionism and determinism. And I hope I have grabbed your interest with this handful of quotes, so that you may want to explore these books further. They are well worth exploring indeed.

Let me finish with a quote by C. S. Lewis from his vitally important 1947 volume, The Abolition of Man. In it he carefully discusses materialistic reductionism and its damaging impact. By wanting to reduce everything down to mere material parts, you lose out on life, meaning and that which is worthwhile.

This happens, for example, when you seek to explain a beautiful rose, simply by describing its cell structure, not its beauty. That may be an accurate description, but it is a reductionistic one. And the materialists and naturalists seek to do that with everything, including mankind. Lewis says that to reduce all of life to “a mere natural product is a step” in the wrong direction. The final words in his book are these:

Up to that point, the kind of explanation which explains things away may give us something, though at a heavy cost. But you cannot go on ‘explaining away’ forever: you will find that you have explained explanation itself away. You cannot go on ‘seeing through’ things for ever. The whole point of seeing through something is to see something through it. It is good that the window should be transparent because the street or garden beyond it is opaque. How if you saw through the garden, too? It is no use trying to ‘see through’ first principles. If you see through everything, then everything is transparent.  But a wholly transparent world is an invisible world. To ‘see through’ all things is the same as not to see.

(Australians can buy – for now – the first four volumes of this set at Koorong: www.koorong.com/product/being-truly-human-the-limits-of-our-worth_9781912721016?ref=https%3A%2F%2Fwww.koorong.com%2F )

3 Replies to “Naturalism, Determinism, Free Will, and Human Dignity”