There are spiritual lessons we can learn even from a great blues legend:

There is always a temptation to judge your life by all the stuff you do – even if it is really good stuff. We judge ourselves and others by our performances. And Christians can do this as much as anyone else. Sure, what we do is important, but who we are is the real measure of a man.

We can get so focused on outward actions and activities that we can let inner attitudes slide, and give things like character a lesser priority. But life will be assessed not just by what we have done, but by who we are – what sort of persons we are. We must always try to keep this in mind. 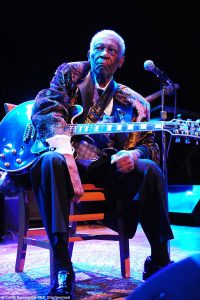 It is possible to go through life concentrating on all the activities we are involved in, or all the things that we do, while not paying much attention to the sort of person we really are – or should be. The Christian should consider both aspects of life.

I say all this because the other night there was a 2018 documentary on television about the legendary blues singer and guitarist B. B. King (1925-2015) which I watched. I must confess, I have always liked the blues, and always liked King. I even saw him perform live back in my hometown in Wisconsin when I was around 17 or 18 years old.

I went up to him at the end of the show and thanked him for his music, and he kindly gave me his guitar pick. When I mentioned this to an art teacher I used to get stoned with (these were my before-Christ days!), he scoffed and said he would have many of these picks with his name on it, and would have gave them away all the time. Even so, I was chuffed to get one!

King of course inspired so many other musicians, and he will forever be known as one of the greats. And he sure kept busy, constantly travelling and performing. The doco was called “On the Road”. For some thirty years he did 300 shows a year. That is a lot of performing. He was not one to sit still and just smell the roses it seems.

Indeed, a blurb for the documentary says this: “B.B. King spent 65 years on the road, with hardly a break for more than a few weeks’ time, totalling some 18,000 performances. To say that there were some more than memorable incidents over all these years would be a massive understatement.” A short trailer of the documentary is found here: www.cardinalreleasing.com/bb-king-on-the-road

It was indeed an amazing career. But one thing especially stood out for me as I watched the doco. As he got older things like dementia and Alzheimer’s started to take their toll. His last performance was on October 3, 2014 at a blues venue in Chicago.

It was a very sad and poignant moment. He was slow in getting out to the stage. When he did make it, he sat on a chair with his guitar on his lap. He sat there for a while, put the guitar pick to the strings, but could go no further. He had forgotten how to play!

After a few minutes a band member came over and said words to this effect: ‘It’s over B. B. This is the end. It’s time to go.’ Wow, what a way to finish an incredible career. He would not perform again in public. He continued to decline, and he died in May, 2015.

It was very sad indeed. For so many decades he was the King of the Blues. He said several times in the doco, ‘This is all that I know how to do.’ Singing the blues and playing the guitar was what he did – and did so very well – for such a very long time. And then it all came to an end.

Immediately upon watching this, two thoughts came to mind. I am in a similar way. I am known for what I do. I have spent over 50 years now reading, studying, researching, writing, teaching, speaking and lecturing. That is what I do. That has been my ministry.

But I am getting old – one day soon it may all come to an end. Maybe my fingers will cripple up and I will no longer be able to hold a pen or use a keyboard. My mind might start going on me, and/or my memory might begin to fade fast. I might lose my eyesight, and thus my ability to read and write.

(The great theologian J. I. Packer has had eyesight problems and other medical issues over the past few years, rendering him basically unable to do anything that he was once known for: writing terrific books and articles, delivering great lectures, and so on. He is still alive, but all that used to characterise his amazing life and work seems to have now fled from him.)

That may well be my fate. I may spend the last years or even decades of my life doing nothing outwardly for the Kingdom. It may be a good thing: perhaps I will only be able to pray and intercede full time. That may well be a much more important work and ministry than what I have been doing previously.

Indeed, I know of one incredible Christian leader and visionary who has done so much good, started so many ministries, and has had such a tremendous impact on so many. But for the past few years he has been stuck in a hospital bed in South Africa. Gone are the days of all the activity he was involved in. So he is living a different sort of Christian life at the moment, presumably approaching the end of his time on earth.

In an email from a few weeks ago Sally McClung said this about her husband: “Floyd is weary and worn down. I pray daily for healing or heaven for him. It has been a long journey. I don’t know how much more he can take. He is being lovingly cared for, and the carers who visit him always encourage him – especially reminding him that his ‘voice’ is still being heard. That always seems to bless him.”

Here is a reality all believers can bank on: One day we will stand before our Lord and our Judge and give an account of our lives. Yes, we will in part be judged by what we did – or did not do. But likely of more importance, God will judge our attitudes, our motivations, our values, our character, our integrity, our reasons for doing things, and so on.

It is always worth bearing in mind that it is not just what we do, but who we are, that really matters.