Those who hate life and hate God are ramping up their attacks on prolifers: 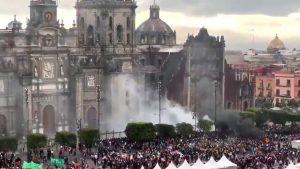 All this is nicely summed up in Proverbs 8:36 where we read: “All those who hate me [God] love death.” The two camps seem to be becoming more and more clearly defined: those who are pro-God and pro-life, and those who are anti-God and anti-life. There is getting to be little middle ground here.

To assess the current state of play concerning the battles over life, let me look at the church around the world and offer four recent stories, ranging from the good to the bad to the ugly. A recent case of the good – and opposition to it – comes from Greece.

There we read about the Greek Orthodox Church fully backing prolife posters being put up in metro stations – but then taken down by the government. One news report puts it this way:

An anti-abortion campaign poster displayed in the Athens metro has triggered a strong reaction from the government, which forced the transportation company to immediately remove it. On Monday (13 January), social media in Greece were flooded with pictures from the subway. News website In.gr wrote that social media users have been angry with the campaign which brings the country “back to the Middle Ages”.

The posters sponsored by the “Movement in favor of Life” wanted to send a message against abortion using the slogan “Choose Life”. Greek media reported that the Orthodox Church is fully backing the anti-abortion movements. Following the intense reaction of opposition parties and activists, the conservative minister of transport, Kostas Karamanlis, asked the transportation company (STASY) to remove the campaign posters as they were arguing “against an absolutely guaranteed and indisputable right of women”. www.euractiv.com/section/health-consumers/news/athens-metro-advertises-anti-abortion-campaign/

What can only be described as real bad news concerns this appalling case out of the UK. It involves a church effectively giving its blessing to the pro-death camp:

Britain’s pre-eminent advocate of abortion, responsible for killing 70,000 babies in 2019, has been awarded a doctorate at a ceremony hosted by the mother church of the global Anglican Communion. Dean of Canterbury Robert Willis, responsible for hosting the ceremony, is refusing to address the morality of the event, while Archbishop of Canterbury Justin Welby is claiming a lack of “consensus about precisely when life begins in the womb.”

Ann Furedi, head of the British Pregnancy Advisory Service (BPAS), Britain’s largest abortion provider, was made an Honorary Doctor of Science at a ceremony in Canterbury Cathedral on Nov. 22. A militant campaigner for overturning pro-life legislation in Ireland, Furedi bragged about defeating the Catholic position on abortion: “And with the stroke of a pen Catholic Ireland has an abortion law that is more progressive by 12 weeks than the U.K. Amazing!!!”

Thankfully some prolife Christians spoke out against this. Dave Brennan, head of the prolife parachurch group Brephos, put it this way:

If Donald Trump had been given an award in Canterbury Cathedral, the wokeness police would have complained and Canterbury would have immediately apologized. I feel physically sick that my Lord Jesus is being misrepresented here as tacitly in support of mass-baby killing. If Jesus turned tables in the Temple because people were making money selling pigeons for sacrifices, one shudders to think what he’d do in Canterbury where a woman is awarded a doctorate for making money out of child sacrifice. But for someone overseeing the greatest genocide in our nation’s history being given an award in what is supposed to be a church of Christ, there is not a hint of contrition. www.churchmilitant.com/news/article/canterbury-cathedral-hosts-award-ceremony-for-top-u.k-abortionist

And this news item from a few months ago in Mexico shows more of the battle between life and death – God and Satan:

Abortion activists in Mexico City tried to burn down a Catholic cathedral and a government building Saturday during a protest demanding legalized abortion across the country. The Catholic News Service reports Catholics stood in front of the doors of the Mexico City Metropolitan Cathedral to block abortion activists from entering and doing even more damage. Firefighters quickly extinguished the blaze, and police blocked the pro-abortion protesters from doing more damage at the cathedral, according to the report. www.lifenews.com/2019/09/30/abortion-activists-try-to-burn-down-catholic-church-during-protest-but-catholics-gather-to-stop-them/

Similar demonic rage is on display in Germany, as these two recent news items graphically illustrate:

Police in Germany are investigating an arson attack on an independent evangelical church in Tübingen. A self-described “autonomous feminist cell” claimed responsibility for the 26 December 2019 attack on the TOS church in the Baden-Württemberg university town. The Rev. Guido Kasch, pastor of TOS Church in said: “We are shocked by this attack, but unfortunately not surprised in view of the increasingly hostile climate against evangelical Christians. In recent months we have seen aggressive threats against TOS church in Tübingen, especially from the left-wing scene.” anglican.ink/2020/01/07/feminist-group-firebombs-evangelical-church-in-germany/

And a few days later this also in Germany:

On New Year’s Eve, the car of a Protestant pro-life journalist Gunnar Schupelius was set ablaze in Berlin by far-left extremists. Schupelius, who runs his own blog and writes for the newspaper B.Z., had been previously condemned for calling on his fellow Germans to join the March for Life, which took place last fall. This invitation enraged feminists, triggering the arson attack that resulted in Schupelius’ car being almost completely burned.

“Every year he heavily promotes the ‘March for Life’ of male and female opponents of abortion and repeatedly makes it clear what he thinks of women and their tasks and duties,” stated the feminist group claiming responsibility for the attack. “We torched his SUV today,” the group added, and provided explicit details about where the journalist lives while stating that he “lives there with his children.”

The group claiming responsibility for the attack, Feministische Autonome Zelle, had previously attacked an evangelical church in Tübingen on December 27, and is unapologetic about its use of violence. They admitted that Schupelius also does charity work, but scorned his social contribution as one that only assists “those who subject [themselves] to the concept of hetero-normative worldviews.” Helping the poor and underprivileged, it seems, should only be the purview of abortion enthusiasts. www.lifesitenews.com/blogs/angry-feminists-torch-car-of-pro-life-journalist-for-promoting-german-march-for-life

This is demonic stuff indeed. American commentator Michael Brown has just penned a piece on these attacks in Germany and says this at the beginning of his article:

And he concludes his piece as follows:

Jezebel hates the message of Christianity, the message of the prophets, the message of life. Jezebel despises God’s authority. She replaces it with the idolatrous worship of other gods. She leads people into the exaltation of self. In short, “We will not have God rule over us!” Jezebel’s bark, though, is larger than her bite. Just stand up to her and refuse to bow down to her intimidation and threats, and in the end, she will be defeated. Stand strong, pro-life Christians of Germany! The unborn are depending on you. stream.org/jezebel-shows-her-face-in-germany/

For those wanting more of this sort of biblical and theological perspective, consult Brown’s new book, Jezebel’s War With America. It has a chapter on abortion of course, and I hope to review the volume soonish.

6 Replies to “Churches, the Left, and Baby-Killing”