We need to discern the times we are in – times of persecution:

That true Christians will be despised, hated, attacked and persecuted is a given. Jesus for example said this: “If the world hates you, keep in mind that it hated me first. If you belonged to the world, it would love you as its own. As it is, you do not belong to the world, but I have chosen you out of the world. That is why the world hates you. Remember what I told you: ‘A servant is not greater than his master.’ If they persecuted me, they will persecute you also. If they obeyed my teaching, they will obey yours also.” (John 15:18-20)

And the Apostle Paul concurred, writing: “In fact, everyone who wants to live a godly life in Christ Jesus will be persecuted.” (2 Timothy 3:12) You can bank on these truths – so much so, that if you are NOT getting any sort of persecution or negative responses, you may need to ask if you are really a Christian. 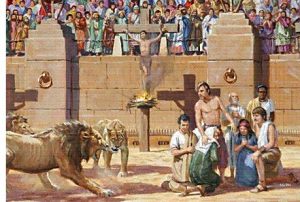 Yes, it is that serious. As Martyn Lloyd-Jones put it, “If you are suffering as a Christian, and because you are a Christian, it is one of the surest proofs you can ever have of the fact that you are a child of God.” Or as Leonard Ravenhill said, “If a Christian is not having tribulation in the world, there’s something wrong!”

And remember I started this article by speaking about “true Christians”. Fake Christians of course will know nothing about what is being discussed here. They will be getting along with the world just fine. So of course they will not experience persecution. As John R. Rice once put it, “The world never burned a casual Christian at the stake.”

Here I want to deal with the situation in the West. A few preliminary remarks: First, some will scoff when I and others speak of persecution in the West. Sure, we are not being tortured, beheaded and killed for our faith as is often the case overseas.

Not yet, at least. But when a person is forced out of his job because of his Christian beliefs, or heavily fined, or even incarcerated for periods of time, those types of suffering and hardship are very real indeed. I know some of these people, including those trying to feed their families but who have been unable to work for long periods of time because of their Christian beliefs.

From that sort of perspective, we find that genuine anti-Christian bigotry and persecution is not only happening in the West, but it has been ramping up for decades now. Things really are getting worse in this regard, and if we don’t wake up to what is happening, it may soon be too late for warnings like this to be penned.

For many years I and others have been trying to sound the alarm and alert people to the increasing persecution of Christians, often taking the form of the culture wars. As the culture around us becomes more and more ungodly, immoral and hostile to our faith, we can only expect to be respected less and less and vilified and harassed more and more.

As such, it is not amiss to speak in terms of the stages of persecution. If we seek to learn from the past, and from other parts of the world, we can discern an actual progression of anti-Christian activity. Sure, this is not a hard and fast formula, but it is a general overview of how things tend to escalate.

I refer to something I recently read. I looked up the original source, and it appears to have come from a piece written back in 2012. I refer to what Msgr. Charles Pope wrote on “Some thoughts on the five stages of religious persecution”. In the piece he mentions where he first heard about this and gives credit for it. Although writing as a Catholic, he of course includes all believers. As he says in his introduction:

It is rare that a respected segment of American life would become vilified and hated overnight. The usual transformation from respect to vilification goes in stages which grow in intensity. And hereby the Church, once a respected aspect of American life, along with the Protestant denominations has become increasingly marginalized and hated by many. It may help us to review these stages of persecution since it would seem that things are going to get more difficult for the Church in the years ahead. Generally, there are distinguished five basic stages of persecution.

He goes on to list these five stages. You can read what he has to say about each one, but here are the five:

He concludes his article with these words: “Unlikely you say? Alarmist? Well, stages one through four are pretty well in place. One may wish to whistle past the graveyard but it looks like we’re pretty well set for Stage V. You decide.” Have a read of the full piece here: blog.adw.org/2012/11/some-thoughts-on-the-five-stages-of-religious-persecution/

Bear in mind this was written some eight years ago. From my vantage point – dealing as I do with so many who have already fell afoul of the misotheists and Christophobes – I would say we most certainly are in Stage V. Sure, expect things to get even worse than they already are, but there is no doubt where we are now at in the West.

Make no mistake, there still are some churches and denominations in the West today that DO have the full blessing and approval of the world. But they are apostate churches and church leaders. They are those who have long ago sold their birthright for the desire to be loved and accepted by the world.

They are the ones fully on the pro-abortion bandwagons, on the pro-homosexuality and trans bandwagons, and on the interfaith bandwagons. The world loves them because they have the same values and mindset as the world does. They are not counter-cultural as the true church of Jesus Christ will always be.

As one writer put it:

The only Christians who get persecuted are those who: (1) share the gospel when the government says not to (check the book of Acts) or (2) stand against evil when the majority are toeing the line (see the book of Daniel). If you haven’t already been doing these things when you had the freedom to do it, what in the world makes you think you will do it when you don’t have those freedoms? The government WILL NOT CARE if you keep the gospel inside your church walls and only vote against evil. Every oppressive government has allowed churches to meet just as long as they keep their mouths shut (Nazi Germany, Soviet Union, China even has State-controlled churches). If persecution is coming, don’t worry, you won’t see any of it so long as your Christianity is limited to your church attendance. americanvision.org/6623/president-obama-and-persecution-complexes/

But we who faithfully love and obey Christ and the Word and seek to be salt and light will always be seen as renegades, rebels and recalcitrants by the world. How could it be otherwise? All that we cherish and value the world hates. Consider a few of the obvious contrasts:
We are in the light, they are in the darkness.
We affirm life, they affirm death.
We cherish morality, they cherish immorality.
We champion truth, they champion relativism.
We are exclusive in our beliefs, they are inclusive.
We say no to self, they say yes to self.
We hail King Jesus, they crucified King Jesus.

The list could go on and on. So of course we will be targeted by the world. Increasingly we have little in common with the world. Sure, we live in the world, and we try to reach those in the world. And we seek to build bridges to our non-Christian neighbours.

But it is the height of folly to expect that we can get along with the world and be loved by the world if we are fully true to biblical truth and stand strong in our allegiance to Christ. Again, we are warned about this repeatedly in Scripture. As Jesus said in John 16:2-4:

“They will put you out of the synagogue; in fact, a time is coming when anyone who kills you will think he is offering a service to God. They will do such things because they have not known the Father or me. I have told you this, so that when the time comes you will remember that I warned you.”

It does indeed seem that the time is coming. Let me finish with two quotes. Regardless of your take on eschatology, these are well worth reading. First, David Pawson said this: “A true man of God prepares God’s people for persecution. The false teaches them how to avoid it.” Second, Corrie Ten Boom, wrote this in 1974:

There are some among us teaching there will be no tribulation, that the Christians will be able to escape all this. These are the false teachers that Jesus was warning us to expect in the latter days. Most of them have little knowledge of what is already going on across the world. I have been in countries where the saints are already suffering terrible persecution. In China, the Christians were told, “Don’t worry, before the tribulation comes you will be translated – raptured.” Then came a terrible persecution. Millions of Christians were tortured to death. Later I heard a Bishop from China say, sadly: ‘We have failed. We should have made the people strong for persecution, rather than telling them Jesus would come first. Tell the people how to be strong in times of persecution, how to stand when the tribulation comes – to stand and not faint.’ I feel I have a divine mandate to go and tell the people of this world that it is possible to be strong in the Lord Jesus Christ. We are in training for the tribulation, but more than sixty percent of the Body of Christ across the world has already entered into the tribulation. There is no way to escape it. We are next.

15 Replies to “The Stages of Christian Persecution”