We need to learn about genuine Christianity:

There are two main types of Christianity. There is the version found in the West in which many (most?) people who call themselves Christians are basically indistinguishable from their non-Christian neighbours. They live, walk, act and talk just like everyone else does.

Except for perhaps heading off to church for an hour each Sunday, there would be little reason at all to suspect they were Christians. And likely most of them have never even shared their faith with others. They live entirely comfortable, wealthy, materialistic, and self-centred lives. They only seem interested in having their best life now. 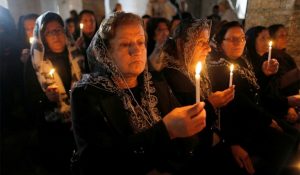 Chances are good that most would fail the test of the old saying: “If you were arrested for your faith, would there be enough evidence to convict you?” But there is another sort of Christianity: the real deal Christian. They are so authentic and genuine that everyone knows they are Christians.

They can’t stop talking about their faith, and what really matters is that they stand strong for Christ when the pressure is on. If carnal, compromised and lukewarm Christians are found all over the West, these on-fire, Spirit-filled and courageous believers are found mainly in places where the faith is under fire, persecution is rife, and being a believer really costs you something.

Of course it is always the case that persecution and fierce opposition does a great job of separating the wheat from the tares, the sheep from the goats. Church history is full of examples of this. When hard-core attacks on the faith take place, those who were never true Christians quickly fall by the wayside, leaving only genuine Christians to face the music and take the heat.

Sure, as I have often said elsewhere, the Bible does not encourage us to seek out persecution or pray for it. When there is real religious liberty that is a blessing indeed. But too often when everything is hunky-dory, the faith of most Christians can get very weak and flabby indeed.

And so the hardest part is to get believers in the West to live a sold-out life for Christ when so much of the surrounding culture puts pressure on them to simply compromise here and there, relax, and not take their faith too seriously. The overwhelming tendency is to just become quite apathetic and lukewarm, and it takes real effort to go against the flow.

So how do we go against the flow here? How do we live lives of serious Christian discipleship when things are for the most part so pleasant in the West, where we are awash with all the consumerism and life of ease that is possible? I guess the real question here is, how do we love Christ supremely as we ought?

Much can be said about how this happens, but let me mention just one thing. If you live in the West, look around you, and compare yourself with most other believers, you will likely think you are doing just fine. It is only when you contrast your Christian life with those who are paying a massive price for their faith that you begin to see the major discrepancies.

Reading about suffering saints facing heavy persecution is clearly one way to get the contrast. When you read about what so many Christians over the centuries have had to endure to stand for Christ, it puts our lives utterly to shame. We have to honestly ask ourselves if we have ever really sacrificed anything for our Lord.

Indeed, reading their stories should put most of us to shame. It should result in all of us falling on our faces before Almighty God and confessing our sins of apathy, carelessness, compromise, carnality and lukewarmness. Heartfelt repentance before the Lord is the first port of call.

By way of illustration, allow me to get a bit autobiographical here. I became a Christian at age 18, in 1971. Next year will mark a half century of being a disciple of Christ. Early on I was exposed to the lives of courageous Christians who paid such a heavy price to be faithful believers in hostile environments.

Perhaps a year or so after I became a Christian, I read an incredible book by a Bulgarian pastor, Haralan Popov (1907-1988). Called Tortured for His Faith (Zondervan, 1970), it told the amazing story of how this man endured 13 years of imprisonment and torture by his Communist captors. In all this hellishness he never renounced his faith, but instead stood strong for Jesus.

I just did a quick look for the book, and it seems I may have left it behind in America. But I believe he made this important observation: in a place like Bulgaria, during the communist reign of terror, there were no lukewarm Christians. How could there be? You either stood up for Christ no matter what, or you sold out.

And perhaps a year or so after reading this book I got to hear an incredible Christian speak. He had a very similar story to tell: Romanian Christian pastor Richard Wurmbrand (1909—2001). His 1967 book Tortured for Christ spoke of how he endured 14 years of cruel and torturous imprisonment at the hands of the Communists because of his Christian faith.

When you read books like these, or hear men like these, it changes you forever. You cannot be the same. You look around you and see indifference, apathy and compromise everywhere. You have a hard time squaring what you find in so much of Western churchianity with what you have just read about or heard about.

And there is no shortage of such incredible stories of courageous Christians enduring the wrath of hell as they stand true for Christ. Just yesterday I wrote about the wonderful revivals taking place in Iran, the Islamic hellhole where Christians routinely face some of the most horrific persecution.

In that piece I also mentioned two young, remarkable women, Maryam Rostampour and Marziyeh Amirizadeh, and their book, Captive in Iran (Tyndale, 2013). What a mind-blowing story of two courageous Christians standing up to the diabolical Islamic regime.

In 2009-2010 they had to endure 9 months of hellish prison conditions because they insisted on sharing Jesus Christ with everyone they could in Tehran. So often they had the chance to gain their freedom – it was so easy: all they had to do was effectively renounce their faith, say they were wrong, and not speak anymore of Jesus.

But they refused every single time. They would rather suffer and die than turn on the one who suffered and died for them. Toward the end of their 9 months they stood before various judges and Iranian bigwigs. As they said to one official:

If we wanted to change our minds, we would have done that six months ago and not spent all those days in prison! We’ve been threatened with death. That’s no problem. We’re not afraid of death. What we’re afraid of is life without faith, life without our Savior, Jesus Christ.

Or as they said to one Iranian judge:

We don’t believe in Christ the way other religions do. Jesus is the beginning and the end. He is everything. Any view that diminishes His perfect completeness is a false view. Jesus is the one and only true Savior of the world. Nothing you can do will make us deny that truth or water it down. We believe the Lord is our ultimate liberator, and we don’t want to be released from prison under any circumstances if it means denying Christ. If we had wanted to be freed by denying our faith, we could have gotten out of prison months ago. Jesus is our Savior now and forever!

Because of their resolute commitment to Christ, they daily shared the gospel and prayed for countless other women prisoners, and many came to Christ. And when they were finally released, they learned of how much greater their impact had been – greater than they ever could have imagined:

The good news was that we heard indirectly of many cases where news of our arrest and our defiance had led others to Christ. When people learned we were willing to die rather than deny our faith, they wanted to know what it was that was worth that kind of sacrifice. Some we had spoken to in the past who hadn’t been interested in Christianity now read the Bible eagerly and asked probing questions about it. We praised the Lord for that.

These books and testimonies, and many others like them, are just what the moribund, comatose and spiritually anaemic church in the West so desperately needs to read and to hear. I encourage you right now to get hold of some of these volumes, or view some of the online testimonies of these great champions for Christ.

The West is in dire need to learn what real deal Christianity is all about. These saints will help point us in the right direction.

15 Replies to “Where There Are No Lukewarm Christians”