With Sanders and CO pushing socialism, we need to again make the case for its viable alternative:

With the very real – and very frightening – likelihood of a hard-core socialist actually leading the Democrat charge in America against President Trump later this year, the need arises to once again make the case for free markets and individual liberty.

Indeed, each generation needs to defend afresh the great social values of freedom, democracy, and free markets. Great defences have already been made, and more will be forthcoming. But sometimes returning to what has gone before is the best way to proceed. 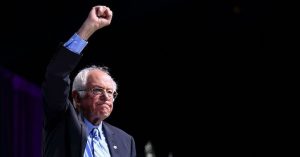 Almost 40 years ago an exceptional book making this case appeared, and it still handsomely repays careful attention. Those who have already read it are encouraged to do so again. And those not yet familiar with the work are now urged to get it and digest it.

I refer to the now classic volume The Spirit of Democratic Capitalism by Michael Novak (Simon and Schuster, 1982). The author passed away a few years ago, and if you want to learn more about him and his work, see this piece: billmuehlenberg.com/2017/02/18/michael-novak-rip/

This book makes an eloquent and incisive case for how the free market – for all its faults – has done more than any other system to raise the masses out of poverty while affirming individual liberty. It is among the best defences of democratic capitalism available.

What follows is not a book review as such but simply a number of quotes from the book. These do not fully reveal what is found in the book, but they should give you some idea of what is there, and hopefully whet your appetite for more. Here then are a dozen select passages:

“What do I mean by “democratic capitalism”? I mean three systems in one: a predominantly market economy; a polity respectful of the rights of the individual to life, liberty, and the pursuit of happiness; and a system of cultural institutions moved by ideals of liberty and justice for all. In short, three dynamic and converging systems functioning as one: a democratic polity, an economy based on markets and incentives, and a moral-cultural system which is plural and, in the largest sense, liberal.”

“Creation left to itself is incomplete, and humans are called to be co-creators with God, bringing forth the potentialities the Creator has hidden. Creation is full of secrets waiting to be discovered, riddles which human intelligence is expected by the Creator to unlock. The world did not spring from the hand of God as wealthy humans might make it. After the Fall, ignorance and disorder became commonplace.”

“Democratic capitalism is neither the Kingdom of God nor without sin. Yet all other known systems of political economy are worse. Such hope as we have for alleviating poverty and for removing oppressive tyranny—perhaps our last, best hope—lies in this much despised system.”

“What the founders of democratic capitalism most feared is the gathering of all power into one. No human being, they believed, is wise or good enough to be trusted with undivided, unitary power. For this reason, they separated moral-cultural institutions like the press, the universities, the church and voluntary associations of free speech from the state. But they also separated economic institutions from the state….
Democratic capitalism is not a ‘free enterprise system’ alone. It cannot thrive apart from the moral culture that nourishes the virtues and values on which its existence depends. It cannot thrive apart from a democratic polity committed, on the one hand, to limited government and, on the other hand, to many legitimate activities without which a prosperous economy is impossible. The inarticulate practical wisdom embedded in the political system and in the moral-cultural system has profoundly affected the workings of the economic system. Both political decisions and the moral climate encouraged this development. At various times in American history, both the political system and the moral-cultural system have seriously intervened, positively and negatively, in the economic system. Each of the three systems has modified the others.”

“The invention of democratic capitalism was aimed at the discovery of practical principles that would make such common life possible, while holding sacred the singular sphere of each human person. Democratic capitalism is not a system aimed at defining the whole of life. Its aim is to establish the practical substructure of cooperative social life….
Alone among the systems known to humankind, democratic capitalism has tried to preserve the sphere of the person inviolable. It glories in divergence, dissent, and singularity. It has done so by inventing a set of practical principles, embodied in institutions, and jealously guarded by rival interests each of considerable power, by which social cooperation may be achieved, without prior agreement on metaphysical, philosophical, or religious presuppositions.”

“What democratic capitalism fears is tyranny, most notably by the state, but also by excessive private power. It fears the mean pettiness of regimented equality. . . . Under democratic capitalism, inequalities of wealth and power are not considered evil in themselves. They are in tune with natural inequalities which everyone experiences every day. Nature itself has made human beings equal in dignity before God and one another. But it has not made them equal to one another in talent, personal energy, luck, motivation, and practical abilities. . . . Long before the rise of democratic capitalism, even in biblical times, envy was potent. Nature itself generates inequalities of looks, stature, intellect, and heart. Should a good society repress inequalities, or should it respect them, while teaching cooperation and respect? Democratic capitalism is loathe to repress natural human energies which manifest obvious inequalities. Such energies are perennial, universal, and irrepressible; the attempt to repress them breeds yet more dangerous evils. Yet even persons in many ways unequal to one another may respect one another in other ways as equals, may cooperate, and seek mutual benefit.”

“The founders of democratic capitalism had a further structural reason for giving greater scope to men of manufacturing and commerce than had obtained under any previous form of political economy. They wished to build a center of power to rival the power of the state. They separated the economy from the state not only to unleash the power of individual imagination and initiative but also to limit the state from within and to check it from without. They did not fear unrestrained economic power as much as they feared political tyranny.”

“Poverty may not be evil in itself, but it does restrict choices. The key to increasing the wealth of nations lies, then, in stimulating economic activism. The chief good to be gained through such activism is increased personal liberty. Thus, increased personal liberty is both a goal in itself and a means toward other goals, a method of stimulating economic activism.”

“Democratic capitalism aims at the widest possible diffusion of liberty. It recognizes that individuals exhibit incredible variety from person to person, and that some cultures, better than others, prepare their participants to embrace liberty of opportunity with intelligence, verve, and demonstrable effect. By pursuing a course of liberty, democratic capitalism in the United States escaped the age-old tyranny of the zero-sum game. Instead of focusing attention upon sources of envy and resentment, democratic capitalism focuses upon future possibilities. Ideally, it permits no single person to feel trapped, except by his own misjudgments or actions. It does not promise equal futures for every group. But it does promise opportunity for every group and for every individual. It does not presume that all individuals and all groups have equal capacities for seizing opportunities. It does not expect all to succeed equally. Those who lack opportunity for self-advancement have a legitimate grievance against its promises. Those who can demonstrate unequal results have no such legitimate grievance. A free society is necessarily committed to unequal results. For under conditions of liberty, individuals as well as groups make different choices and follow divergent paths.”

“Yet it is as a kind of religion that socialists most often justify their beliefs. Seldom do they claim that the superiority of socialism lies in its works, its practicality, its proven fruits. Nearly always they justify it in terms of its vision . . . Quite commonly, socialists are prepared to admit that democratic capitalism is more productive, more efficient, and far less vicious in practice than socialist theory would lead one to expect; in short, it works better. They rest the case for socialism on its supposed moral superiority over democratic capitalism.”

“Although democratic capitalism is not without its injustices, contradictions, and internal evils, still, on crucial points the history of the last ninety years suggests that the ‘philosophical teachings’ and the ‘historical movement’ of democratic capitalism have been vindicated, whereas both the ‘philosophical teachings’ and the ‘historical movement’ of socialism have had to be substantially amended. This is true concerning atheism, materialism, determinism, class struggle, the collectivist state, rule by one party, the supposed resistance of socialism to imperialism, and the utility of the basic economic techniques of democratic capitalism: private property, markets, and incentives.”

“The Jewish and Christian view shows that God is not committed to equality of results. One steward differs from another in his performance; some virgins are foolish, some wise. The faithful son receives no celebration comparable to the one given by his father for the prodigal. Workers who arrive at the eleventh hour receive the same wage as those who bore the whole day’s heat. St. Paul bids all to compete, to measure themselves as he measures himself, and to outdo him if one can: God will be the judge. Religious compassion does not entail levelling.”

As mentioned, this is not a proper book review. The quotes I offer here may raise as many questions as provide answers – especially for critics. And to those critics who will want to come here and ask, ‘Well, what about this? What about that?,’ my response would be to get the book and have a read. He likely covers your objections, and can answer them much better than I.

But I share all this to show that there are good reasons why we should resist the siren songs of the socialist saviours such as Sanders, and stick with the only economic system that seems to actually work, and that has helped to raise millions out of poverty.

7 Replies to “In Defence of Freedom and Free Markets”