We all need to test ourselves in this regard:

There is no question that some of the worst of the bad guys that Jesus had to deal with on a regular basis were the Pharisees. They were the bane of his existence, and he tended to get more upset and incensed with them than with anyone else.

Of course plenty of scholarly and academic treatments exist that describe and assess this group of religious figures. One could wax eloquent here looking at them from that point of view. But here I want to make things a bit more practical for us – even pastoral and devotional. 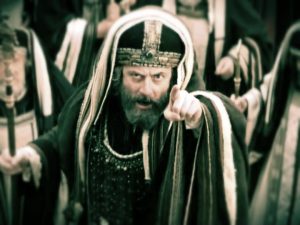 And I need to preface my remarks by stating the obvious: we all can have our Pharisee moments, and we all have been guilty of acting like Pharisees. But some Christians seem to inhabit this world much more than others. Some seem to pretty much fit the bill when it comes to carrying on like a Pharisee. So let me offer six indications that you or I might be a Pharisee.

1. You might be a Pharisee if you keep looking down on others, believing yourself to be so spiritually superior. The classic characteristic of a Pharisee is self-righteousness. It is a vaunted self-spirituality, the idea that I am so much better than others. Luke 18:11 comes to mind here: “The Pharisee, standing by himself, prayed thus: ‘God, I thank you that I am not like other men, extortioners, unjust, adulterers, or even like this tax collector’.”

Of course non-Christians do this all the time as well: they build themselves up by tearing others down. But bear in mind what I am NOT saying here: there is indeed a place for calling out other believers when their doctrines and behaviour are very much running against Scripture.

But even there, when we offer correction and/or reproof, we must keep in mind Galatians 6:1 which warns us to consider ourselves as we do this. Humility is key here. The real Christ-follower is fully aware of how far short he falls each day. He is very much aware of his own issues and so he does not want to superficially compare himself with others.

There is a terrific quote by Spurgeon on these matters which is always worth keeping in mind: “Brother, if any man thinks ill of you, do not be angry with him; for you are worse than he thinks you to be. If he charges you falsely on some point, yet be satisfied, for if he knew you better he might change the accusation, and you would be no gainer by the correction. If you have your moral portrait painted, and it is ugly, be satisfied; for it only needs a few blacker touches, and it would be still nearer the truth.”

2. You might be a Pharisee if you are routinely full of hypocrisy and double standards. And this is closely related to my first point. We have all come across so many believers who will chew you out for something that they are doing at the very same moment.

For example, when a believer comes to my social media page quite upset, telling me how evil and sinful it is to publicly criticise, judge and chew out another believer, all the while publicly criticising, judging and chewing me out, my head just spins.

The Pharisee-ism is so strong in these folks, and they seem utterly blind to their own blatant hypocrisy. I can of course pray for them, but it seems there is little point in keeping them as FB ‘friends’ when they are in this condition. They prefer to keep attacking you and letting you know how spiritually inferior you are.

3. You might be a Pharisee if you can’t accept those whom God accepts. Acts 10 is a key passage here. Peter had a real hard time accepting that God was now including Gentiles into his family. Indeed, God had to remind him of this truth: “Do not call anything impure that God has made clean.”

While there are indeed various biblical tests to help us assess who really belong to God, Pharisees are far too quick to set up artificial or man-made barriers. They have various tests of orthodoxy, and have decided that certain persons can NOT be Christians.

You are a Pharisee when you, instead of God, determines who can be a true Christian. Again, we have doctrinal tests that are important, and we can assess people by their fruits. But ruling out entire groups or classes of people because they do not fit in with our preconceived pet theological tests is a mark of Phariseeism.

4. You might be a Pharisee if you are more concerned about outward appearances than inner realities. Are you always trying to impress others, trying to put on a show, and seeking to be approved by men? Yes, we all want to be thought well of by others, but if the fear of man trumps our fear of God, something is amiss.

We all know of those who seem to act so very spiritual and saintly when in public or with other believers, but when we see them in a more private setting, we can note a real contrast. The true Christian seeks to consistently display the fruit of the Spirit and live by biblical standards, not just when others are around.

5. You might be a Pharisee if you always want to get the credit for anything good that happens. Sadly this occurs so often with various Christian ministries, churches, and parachurch groups. Many do not want to readily work with other groups because they are too intent on building their own little kingdom.

Instead of being much more effective by working with others, not reinventing the wheel, and seeking to be a bit cooperative, too many groups are suspicious of others and think that only they can do the job. Much of this has to do with pride and wanting to get all the glory.

I have seen this happen so often, and it is grievous to behold. There are just so many Christians wanting to build their own little empires out there, instead of being content to be a co-labourer with Christ as he builds his empire. A quote attributed to Harry S. Truman is so very relevant here: “It is amazing what you can accomplish if you do not care who gets the credit.”

6. You might be a Pharisee if you think this article only applies to others. As I said at the beginning, we all can be guilty of being Pharisees, or of having Pharisee-like tendencies. So the true child of God always thinks first of himself when he hears a convicting sermon or reads a moving passage of Scripture. He does not instantly think of others, but applies truths to himself.

And if he does think of others, it is not to condemn them or look down on them, but it leads him to pray for those people. He is grieved that the Body of Christ is not where it should be, and he includes himself in any such concerns about how far short we all are as to what Christ wants and expects of us.

Indeed, a really big part of the problem for Pharisees is they don’t even know that they are one. They are so busy looking down on others, being hypocritical, refusing to accept others, worried about external appearances, and wanting to get all the glory, that they cannot even see that they are the very sorts of folks that Jesus kept condemning.

This article is not written of course because you and I have encountered so many Christian Pharisees over the years. We all have – but the main thing to take out of this is for me (and you) personally to think and pray about how I (and you) can avoid so easily being a Pharisee.

8 Replies to “6 Signs That You Might Be a Pharisee”