Here are 35 terrific quotes from the great Thomas Sowell:

My thesis here is straightforward; You all need to be familiar with the American economist and social commentator Thomas Sowell. The 89-year-old was a Marxist while younger, but is now known as being a defender of libertarian and conservative principles and values.

He is a syndicated columnist and has taught economics at a number of universities. Sowell has penned around 50 books, all of which are worth getting and reading. I must confess – to my eternal shame – that I only have 25 of his books. But I certainly hope to get more in the days ahead.

I am obviously a real fan of his, since in around 90 of my 5100 articles I have quoted from him. Some of my articles are fully devoted just to him and some of his books, as for example this piece: billmuehlenberg.com/2012/06/12/a-conflict-of-ideologies/ 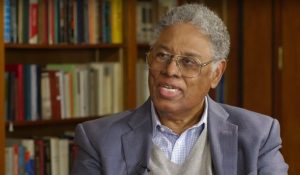 One way to perhaps entice you to read (or reread) his works is to simply offer a number of quotes from Sowell – one from each of his books that I own. But before offering you these quotes, let me mention two rather gargantuan problems associated with making this happen.

First, it is of course impossible to pick out just one great quote per Sowell book – there would be many dozens of fantastic quotes found in each volume. So offering just one is a painful process indeed, and I feel bad that I had to omit so many.

Second, because space is tight at home, I have had to rearrange some of my bookshelves, so a while back I had to move all of my Sowell volumes into a back bedroom. Thus I have now had to engage in the Herculean task of dragging them all back to where I am writing this piece. Well, exercise never killed anyone.

So here they are. The books are simply offered in alphabetical order, and I provide the date of the book and the page number of the quote. Enjoy these 25 quotes from the great Thomas Sowell.

“Innumerable principles, theories, assumptions and assertions have been used to justify affirmative action programs – some common around the world and some peculiar to particular countries or communities. What is remarkable is how seldom these notions have been tested empirically, or have even been defined clearly or examined logically, much less weighed against the large and often painful costs they entail.” Affirmative Action Around the World, 2004, p. 198

“Patients in countries with government-controlled medical prices have left the overcrowded government sector to seek private treatment at their own expense, either at home or in other countries. It is common for Canadians to go to the United States for medical treatment, but rare for Americans to go to Canada for such treatment.” Applied Economics, 2004, 2009, p. 63

“Economics is not just about dealing with the existing output of goods and services as consumers. It is also, and more fundamentally, about producing that output from scarce resources in the first place – turning inputs into output.” Basic Economics, 2011, p. 5

“Civil rights are not protected or enhanced by the growing practice of calling every issue raised by ‘spokesmen’ for minority, female, elderly or other groups, ‘civil-rights’ issues. The right to vote is a civil right. The right to win is not. Equal treatment does not mean equal results. Everything desirable is not a civil right.” Civil Rights: Rhetoric or Reality? 1984, p. 109

“Far from being downtrodden victims, homosexuals are well-heeled, well-placed, and vindictive against anyone who dares to criticize them in any way. Homosexual politics is not about protecting individuals’ rights to be left alone. Homosexual politics centers upon the promotion of their way of life in public, in the media, and in the schools, to a captive audience of other people’s children.” Compassion vs Guilt, 1987, p. 133

“Central to the concept of social justice is the notion that individuals are entitled to some share of the wealth produced by society, simply by virtue of being members of that society, and irrespective of any individual contributions made or not made to the production of that wealth.” A Conflict of Visions, 1987, p. 192

“Most people on the left are not opposed to freedom. They are just in favor of all sorts of things that are incompatible with freedom.” Dismantling America, 2010, p. 249

“Concern over poverty is often confused with concern over differences in income, as if the wealth of the wealthy derives from, and is the reason for, the poverty of the poor. But this is just one of the many forms of the zero-sum fallacy.” Economic Facts and Fallacies, 2008, p. 134

“The destruction of physical capital or financial capital – painful as this may be – does not touch a nation’s or a people’s human capital, which is ultimately decisive.” The Economics and Politics of Race, 1983, p. 248

“Academics are a special-interest group. Their special interest is to get their production costs paid for by other people [notably the taxpayers] and to give their product a good image so that it will sell. Whether their product actually helps the consumer afterwards is secondary, at best.” Education: Assumptions Versus History, 1986, p. 129

“Discrimination has obviously influenced the incomes of American ethnic groups. All have been discriminated against to one degree or another. Yet some of the most successful—such as the Orientals—have experienced worse discrimination than most, and the extraordinary success of the Jews has been achieved in the face of centuries of anti-Semitism.” Ethnic America, 1981, p. 6

“In short, too many American schools are turning out students who are not only intellectually incompetent but also morally confused, emotionally alienated, and socially maladjusted.” Inside American Education, 1993, x

“Life has seldom, if ever, been fair or even close to fair. The family or culture into which one is born can affect the direction one’s life takes, as can the happenstance of the individuals encountered in the journey through life, who may influence one’s outlook and aspirations, for good or ill. These are just some of the factors affecting one’s life chances.” Intellectuals and Society, exp. ed., 2009, 2011, p. 161

“Historically, freedom is a rare and fragile thing. It has emerged out of the stalemates of would-be oppressors. Freedom has cost the blood of millions, in obscure places and in historic sites ranging from Gettysburg to the Gulag Archipelago.” Knowledge and Decisions, 1980, p. 383

“It is not nearly as surprising that different people have different opinions as it is that some opinions refuse to subject themselves to the test of empirical evidence.” A Man of Letters, 2007, p. 271

“Like so many words in constant use, discrimination is seldom defined. Familiarity takes the place of precision. Yet, if we are to reason about discrimination in cause-and-effect terms (not merely react to it in moral and emotional terms), then the concept must be made specific.” Markets and Minorities, 1981, p. 19

“The supreme irony of Marxism was that a fundamentally humane and egalitarian creed was so dominated by a bookish perspective that it became blind to facts and deaf to humanity and freedom.” Marxism, 1985, p. 221

“Price controls and mountains of red tape are the most obvious way to create a shortage of anything, regardless of how much of it exists in nature.” Pink and Brown People, 1981, p. 73

“Policies must be examined in terms of the incentives they create, and the results to which these incentives lead, rather than the hopes they embody. It will mean that evidence must take precedence over assertion and reiteration.” Preferential Policies, 1990, p. 169

“Perhaps the greatest pitfall in the use of statistics is a failure to pay attention to the mundane but fundamental question as to how the particular numbers in question were generated in the first place.” Race and Culture, 1994, p. 255

“Perhaps the greatest dilemma in attempts to raise ethnic minority income is that those methods which have historically proved successful—self-reliance, work skills, education, business experience—are all slow developing, while those methods which are more direct and immediate—job quotas, charity, subsidies, preferential treatment—tend to undermine self-reliance and pride of achievement in the long run.” Race and Economics, 1975, 1977, p. 238

“Socialism in general has a record of failure so blatant that only an intellectual could ignore or evade it. Even countries that were once more prosperous than their neighbors have found themselves much poorer than their neighbors after just one generation of socialistic policies.” The Thomas Sowell Reader, 2011, p. 144

“Dangers in a society may be mortal without being immediate.” The Vision of the Anointed, 1995, p. 1

OK, I just can’t get enough of Sowell. So here are ten more. Unfortunately, in my earlier days I did not always write down the reference for quotes I collected, so I do not have specific references for some of these quotes. If anyone does have the exact source, please let me know thanks. So here they are:

“As many have warned in the past, freedom is unlikely to be lost all at once and openly. It is far more likely to be eroded away, bit by bit, amid glittering promises and expressions of noble ideas.” The Quest for Cosmic Justice, 1999, 2002, p. 184

“The fatal attraction of government is that it allows busybodies to impose decisions on others without paying any price themselves. That enables them to act as if there were no price, even when there are ruinous prices – paid by others.” Ever Wonder Why? and Other Controversial Essays

“A careful definition of words would destroy half the agenda of the political left and scrutinizing evidence would destroy the other half.” The Thomas Sowell Reader, p. 403

“One of the painful signs of years of dumbed-down education is how many people are unable to make a coherent argument. They can vent their emotions, question other people’s motives, make bold assertions, repeat slogans—anything except reason.” Dismantling America, p. 341

“Much of the social history of the Western world over the past three decades has involved replacing what worked with what sounded good.”

20 Replies to “This is Why You Must Read Thomas Sowell”