What Jonathan Edwards wrote about real and fake revival is must reading for today:

Jonathan Edwards (1703-1758) was arguably the greatest Christian thinker America has ever produced. He was likely its most important theologian and philosopher. He was also a preacher in New England, perhaps best remembered for his 1741 sermon, Sinners in the Hands of an Angry God. 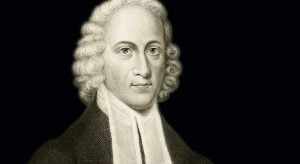 There are various editions of his many works. Some of us have the 2-volume collection of many of his key works edited by Edward Hickman (Banner of Truth, 1834, 1974). For those who are really keen, one can get the full collection of his books and sermons as found in the 26-volume set put out by Yale University.

But he is not just an intellectual heavyweight. Edwards was also a devoted pastor and revivalist who played a key role in the First Great Awakening of the 1730s and 40s. His church in Northampton, Massachusetts witnessed some of the first revivals during 1733 to 1735.

As such he had a lot of firsthand experience with revival. In 1741 he published the short but important work, The Distinguishing Marks of a Work of the Spirit of God Applied to That Uncommon Operation That Has Lately Appeared on the Minds of Many of the People of New England: With a Particular Consideration of the Extraordinary Circumstances with Which This Work is Attended.

It was one of several works he had to pen to defend true revival, and to deal with the many critics of the revivals. He had to examine carefully what may have been spurious manifestations, such as excessive emotionalism, convulsions and swoonings. He knew that in all great moves of God, there would always be satanic counterfeits to undo the real work of God.

His Distinguishing Marks has become a classic on the subject, with various versions available. In 2000 Archie Parrish and R.C. Sproul penned a book featuring this work of Edwards called The Spirit of Revival (Crossway). They offer a modern English translation of it, along with a 20-page introduction by Sproul.

It is that version I wish to utilise here as I examine some of the things Edwards said about how we are to assess revivals and the Christian condition. In his 20-page introduction Sproul has a number of important things to say. He asks, for example:

Is the revival genuine, or is it a mere outburst of superficial emotion? Do we find empty enthusiasm backed by nothing of substance, or does the enthusiasm itself signal a major work of God? In every recorded revival in church history, the signs that follow it are mixed. The gold is always mixed with dross. Every revival has its counterfeits; distortions tend to raise questions about the real…

Edwards warns that the influence, operations, and gifts of the Holy Spirit are aped and mimicked by Satan. That is why it is necessary to provide marks that can help us distinguish between the true Spirit of God and false spirits. Without such distinguishing marks the church is vulnerable to delusions and their dire consequences.

This short (100-page) work by Edwards is divided into three sections. He first examines negative marks, then positive marks, and then offers some practical applications. His entire discourse is based on 1 John 4:1: “Dear friends, do not believe every spirit, but test the spirits to see whether they are from God, because many false prophets have gone out into the world.”

As to the nine negative or indifferent signs which may or may not indicate the Spirit of God, he says that we should not limit God and put him in a box; we can expect some physical manifestations to occur in revival; “rash acts and unconventional conduct” may occur; and so on.

His fourth point discusses how “intense religious emotions are present”. He is not against emotion as such: “God has given us the faculty of emotion. He has so made us that we cannot think of things spiritual and invisible without some exercise of this faculty.” He says that “ecstasy is no argument that a work is not of the Spirit of God.” But not all such manifestations are proof that God is at work.

And he states that real revival can be accompanied by rash and improper acts and the like. He points out how Christ chose Peter, yet “he was guilty of a great and sinful error in conduct.” He also reminds us that in the believer the old man and the new man may “subsist together”. God and Satan do battle in the same human heart, and some “have an aptness to put too much weight on impulses and impressions.”

Consider his eighth point about how some may fall away into sin and error. He writes:

If it appears that God has done a special work in someone and then that person falls away into gross errors or scandalous practices, that is no argument that the work in general is not the work of the Spirit of God. That there are some counterfeits is not an argument that nothing is true. Such things are always expected in a time of reformation. Every great revival of the Christian faith has been attended with many such things. Instances of this nature in the apostles’ days were too numerous to be counted.

As to the five biblical signs of true revival, they are:

As to this last mark, he says this in part:

There is counterfeit love that often appears among those who are led by a spirit of delusion. . . . What is the surest character of true, divine, supernatural love that distinguishes it from counterfeits that arise from a natural self-love? It is the Christian virtue of humility that shines in it. Divine love above all others renounces and abases what we term ‘self.’ Christian love or true love is a humble love. . . . In that person we see a sense of his own smallness, vileness, weakness, and utter insufficiency. We see a lack of self-confidence. We see self-emptiness, self-denial, and poverty of spirit. These are the manifest tokens of the Spirit of God.

Edwards of course wrote about similar themes elsewhere, as in his very important 1746 book, A Treatise Concerning Religious Affections. I may need to do an article on that key work of his as well at some point. But Edwards was without doubt one of our great Christian thinkers who carefully, prayerfully and biblically discussed the nature of revival, true and false.

He was also a tremendous spiritual doctor of the human soul and of Christian experience. He was preoccupied with the soul – both in how it functions in this life and in the next. Dane Ortlund, writing in Finn and Kimble (see reading list below), says this about the great Puritan physician of the soul:

Jonathan Edwards was Reverend Jonathan Edwards. He was a pastor by vocation; he was a pastor at heart. His work was soul work. And he wrote accordingly. . . . [F]or Edwards, the two realities did indeed converge beautifully—vocational pastoring and spiritual shepherding. We must quickly add that just as Edwards’s supreme goal was soul work, his supreme tool in this work was the Bible. His lifelong labor was that of studying, meditating on, writing about, preaching, and in any other way honoring the Scripture. Without a Bible, Jonathan Edwards would have had nothing to say. He was a miner of the Word of God. Edwards himself acknowledged that he wasn’t really suited for any other purpose; shepherding souls, through study of and preaching on and writing about the Bible, was all he was good at.

4 Replies to “Jonathan Edwards On True and False Revival”