There is so much to be gleaned from this terrific book:

Having just bought a number of new editions of some old C. S. Lewis classics, I am reading through them once again – but as if for the first time. Well, the territory is quite familiar, but at least they had no marked-up pages – at first! Now the good bits of each new copy are quickly being underlined once again.

It goes without saying that one can never get enough of C. S. Lewis. Of course one not need agree with him on everything – I certainly don’t. But for the most part the words of wisdom found in his many writings are always worth coming back to. 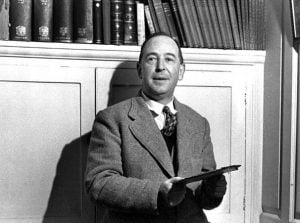 Another one of his very important books is The Problem of Pain, penned 80 years ago. And here again I wish to just offer a number of quotes. There are far too many to choose from of course, but these are some of the real gems of the book. Chapter 3 on “Divine Goodness” contains plenty of nuggets:

“By the goodness of God we mean nowadays almost exclusively His lovingness; and in this we may be right. And by Love, in this context, most of us mean kindness – the desire to see others than the self happy; not happy in this way or in that, but just happy. What would really satisfy us would be a God who said of anything we happened to like doing, ‘What does it matter so long as they are contented?’ We want, in fact, not so much a Father in Heaven as a grandfather in heaven – a senile benevolence who, as they say, liked to see young people enjoying themselves’, and whose plan for the universe was simply that it might be truly said at the end of each day, ‘a good time was had by all’. . . . I should very much like to live in a universe which was governed on such lines. But since it is abundantly clear that I don’t, and since I have reason to believe, nevertheless, that God is Love, I conclude that my conception of love needs correction. I might, indeed, have learned, even from the poets, that Love is something more stern and splendid than mere kindness.”

“It is for people whom we care nothing about that we demand happiness on any terms: with our friends, our lovers, our children, we are exacting and would rather see them suffer much than be happy in contemptible and estranging modes. If God is Love, He is, by definition, something more than mere kindness. And it appears, from all the records, that though He has often rebuked us and condemned us, He has never regarded us with contempt. He has paid us the intolerable compliment of loving us, in the deepest, most tragic, most inexorable sense.”

“Love, in its own nature, demands the perfecting of the beloved … the mere ‘kindness’ which tolerates anything except suffering in its object is, in that respect, at the opposite pole from Love. . . . Love may forgive all infirmities and love still in spite of them: but Love cannot cease to will their removal. Love is more sensitive than hatred itself to every blemish in the beloved.”

“The problem of reconciling human suffering with the existence of a God who loves, is only insoluble so long as we attach a trivial meaning to the word ‘love’, and look on things as if man were the centre of them. Man is not the centre. God does not exist for the sake of man. Man does not exist for his own sake.”

“To ask that God’s love should be content with us as we are is to ask that God should cease to be God: because He is what He is, His love must, in the nature of things, be impeded and repelled, by certain stains in our present character, and because He already loves us He must labour to make us lovable. . . .  What we would here and now call our ‘happiness’ is not the end God chiefly has in view: but when we are such as He can love without impediment, we shall in fact be happy.”

“God’s love, far from being caused by goodness in the object, causes all the goodness which the object has, loving it first into existence and then into real, though derivative, loveability. God is Goodness. He can give good, but cannot need or get it. In that sense all His love is, as it were, bottomlessly selfless by very definition; it has everything to give and nothing to receive.”

“A man can no more diminish God’s glory by refusing to worship Him than a lunatic can put out the sun by scribbling the word ‘darkness’ on the walls of his cell.”

In Ch. 4 he discusses “Human Wickedness” but let me quote from Ch. 5 on “The Fall of Man” which also has much of value to share. But just two quotes will suffice:

“From the moment a creature becomes aware of God as God and of itself as self, the terrible alternative of choosing God or self for the centre is opened to it. This sin is committed daily by young children and ignorant peasants as well as by sophisticated persons, by solitaries no less than by those who live in society: it is the fall in every individual life, and in each day of each individual life, the basic sin behind all particular sins: at this very moment you and I are either committing it, or about to commit it, or repenting it.”

“Our present condition, then, is explained by the fact that we are members of a spoiled species.”

His next two chapters on human pain are also worth offering some quotes from:

“We are not merely imperfect creatures who must be improved: we are, as Newman said, rebels who must lay down our arms.”

“But pain insists upon being attended to. God whispers to us in our pleasures, speaks in our conscience, but shouts in our pain: it is His megaphone to rouse a deaf world.”

“Some enlightened people would like to banish all conceptions of retribution or desert from their theory of punishment and place its value wholly in the deterrence of others or the reform of the criminal himself. They do not see that by so doing they render all punishment unjust. What can be more immoral than to inflict suffering on me for the sake of deterring others if I do not ‘deserve’ it? And if I do deserve it, you are admitting the claims of ‘retribution.’ And what can be more outrageous than to catch me and submit me to a disagreeable process of moral improvement without my consent, unless (once more) I deserve it?”

“No doubt Pain as God’s megaphone is a terrible instrument; it may lead to final and unrepented rebellion. But it gives the only opportunity the bad man can have for amendment. It removes the veil; it plants the flag of truth within the fortress of a rebel soul. . . . Everyone has noticed how hard it is to turn our thoughts to God when everything is going well with us. We ‘have all we want’ is a terrible saying when ‘all’ does not include God. We find God an interruption. As St. Augustine says somewhere ‘God wants to give us something, but cannot, because our hands are full—there’s nowhere for Him to put it.’ Or as a friend of mine said ‘we regard God as an airman regards his parachute; it’s there for emergencies but he hopes he’ll never have to use it.’ Now God, who has made us, knows what we are and that our happiness lies in Him. Yet we will not seek it in Him as long as He leaves us any other resort where it can even plausibly be looked for. While what we call ‘our own life’ remains agreeable we will not surrender it to Him.”

“I am not arguing that pain is not painful. Pain hurts. That is what the word means. I am only trying to show that the old Christian doctrine of being made ‘perfect through suffering’ is not incredible. To prove it palatable is beyond my design.”

“That is why tribulations cannot cease until God either sees us remade or sees that our remaking is now hopeless.”

“For you will certainly carry our God’s purpose, however you act, but it makes a difference to you whether you serve like Judas or like John.”

“But the redemptive effect of suffering lies chiefly in its tendency to reduce the rebel will.”

“If tribulation is a necessary element in redemption, we must anticipate that it will never cease till God sees the world to be either redeemed or no further redeemable.”

“Our Father refreshes us on the journey with some pleasant inns, but will not encourage us to mistake them for home.”

Chapter 8, on hell, must also be quoted from:

“Some will not be redeemed. There is no doctrine which I would more willingly remove from Christianity than this, if it lay in my power. But it has the full support of Scripture and, specially, of our Lord’s own words; it has always been held by Christendom; and it has the support of reason. If a game is played, it must be possible to lose it. If the happiness of a creature lies in self-surrender, no one can make that surrender but that person (though others may help), and the person may refuse. I would pay any price to be able to say truthfully ‘All will be saved’. But my reason retorts, ‘Without their will or with it?’ If I say ‘Without their will’ I at once perceive a contradiction; how can the supreme voluntary act of self-surrender be involuntary? If I say ‘With their will’, my reason replies ‘How if they will not give in?’”

“And here is the real problem: so much mercy, yet still there is Hell.”

“Pain plants the flag of truth within the rebel fortress.”

Finally, two quotes from his concluding chapter on heaven:

4 Replies to “C. S. Lewis and The Problem of Pain”