What seemed like a wasted youth lead to an incredible career:

We are all created differently, so we all have different stories, different interests, different goals, and so on. Some people for example have never read a book in their life. I am not one of them – I read a lot! And so did C. S. Lewis. So I have long been attracted to him for this and other reasons, while others may not be. 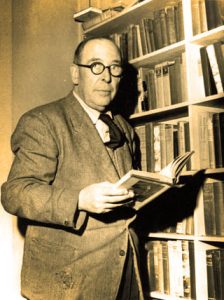 Sure, opposites can attract, and my wife and I differ in many areas. But very early on as I was just getting to know her I discovered that she loved Lewis and Tolkien and Chesterton just as much as I did. That pretty much sealed the deal in my eyes, and we are now husband and wife, approaching our fourth decade together.

The new volume I refer to is Becoming C. S. Lewis (1898–1918): A Biography of Young Jack Lewis (Crossway, 2019) by Harry Lee Poe. It seems to be the first of a three-part biography. In it Poe looks at the first twenty years of the life of Lewis – which are often given short shrift by most biographers.

But, he argues, we cannot properly understand Lewis the Christian apologist and thinker without looking closely at his youth. So much of what we know about the later Lewis was set in motion by what the young Lewis went through, read, and thought about.

If the reader does not mind, I am not here offering any sort of proper review of this book. Instead I want to look at some similarities between the life of Lewis and my own. Of course we are light years apart in so many ways, and it is silly to speak of comparisons at all.

Indeed, it just occurred to me that I am already two years older than he was (he died one week before his 65th birthday). If I had another two thirds of a century, I still could not come close to doing all that he did. Nonetheless, in some ways we did have similar childhoods.

And a main similarity to note is how our non-Christian youth fed into our eventual Christian adulthood. He was converted at around the age of 31, while I was saved at age 18. But the interests we had as non-Christians led the way to our Christian lives, and provided a good foundation for them. The years were not wasted in other words.

For various reasons, including ill health, Lewis never was part of the in crowd, he was never real popular, and he did not get into sports and the like. So he had few close friends and he was not great at social skills. He made up for all this by immersing himself in the world of books and ideas.

While I certainly did not read as far and wide as he did, my story was somewhat similar. I too never fit in well with the crowd, was not popular by any means, and was never good-looking. And along with a long-standing low self-image, I had a mostly lonely and rather sad childhood. So I too lived in books. That was a big part of my world back then.

For Lewis, his love of older literature, fiction, poetry and novels eventually led to his academic career as an expert in Mediaeval and Renaissance literature. He at first wanted to lecture in philosophy, but he ended up as a specialist in English literature.

My early reading and writing also morphed into what I would do for much of my adult and Christian life: a fair amount of reading, research, and writing – including a bit of teaching and lecturing in certain academic circles. This website with 5200 articles is one indication of this. So although as a non-Christian young person I was involved in editing underground newspapers and the like, that early experience was not wasted, and became part of who I now am.

Poe’s book makes it clear that the early reading of Lewis, ranging from the Greek epics and Norse mythology to science fiction and contemporary writers, set the stage for his later life and work. And it was his imagination, coupled with this love of great literature, that battled with his more rational elements.

He early on rejected Christianity, and for some time he was a convinced materialist and a proud atheist. In his mind he refused to believe that there was anything more than nature, but the supernatural kept cropping up in his reading of great fiction. The books he loved best contained the most supernatural, or at least the most pointers to it. As Poe says about this tension:

In many ways, the adolescence of C. S. Lewis is the story of a journey that began when he left home after his mother died. His journey took him to good places and bad, and all the while he was growing into the man he would become. . . . The separation from home and the longing to be in a better place became metaphors for his spiritual condition. Jack Lewis identified with the tales of journey in search of the great elusive something, he knew not what. After his conversion, he understood why this story of journey had been so important to him, because it was his own story….

In reading the stories of William Morris, Sir Walter Scott, Jane Austen, Edmund Spenser, and the Brontë sisters, Jack Lewis found himself agreeing with the values they espoused. He accepted the traditional virtues of a society that had come under the influence of Jesus Christ without recognizing the source of those values. The stories had worked on him not through logical argument but by portraying life in such a way that made a longing appeal to Jack’s deepest desires. The life these stories described was what he longed to experience.

Everything went back to the books he had read as a teenager, and once he was in the English School, he had to deal with them all over again. “All the books were beginning to turn against me,” he wrote. Another way of looking at it would be to say that all the books were leading him in another direction. He found himself enlivened by George MacDonald, Chesterton, Johnson, Spenser, Milton, Donne, Thomas Browne, and George Herbert, all of whom were maddeningly Christian. On the other hand, he found himself bored by George Bernard Shaw, H. G. Wells, John Stuart Mill, Edward Gibbon, and Voltaire.

So all that Lewis went through as a youth was being used by God for much larger purposes. The moral of the story is this: had our childhoods been radically different, so too would have been the paths we took as adults. If I was really popular and well liked, and the desire of every young schoolgirl, would I have spent all that time reading and thinking and meditating on things? Probably not.

I may never have become a Christian, may never have made it to Australia, and may never have been involved in something like CultureWatch. Who knows how I would have turned out? So too with Lewis. If he were better at sports, more popular, had more friendships, and did not have a father who put into him a love of books, he too might have ended up quite differently from where he actually did end up.

As such, we would never have had Mere Christianity, or Miracles, or The Screwtape Letters, or the Narnia tales, and so on. So many millions of people have been so strongly influenced by Lewis. Imagine if he had never turned out as he did.

In stark contrast, I may have only influenced some dozens of people, or perhaps hundreds of people, for the good. But hopefully I have had some sort of impact for Christ and the Kingdom. In which case, my particular journey as a child was well worth it, and not wasted.

If you are somewhat more melancholic like I am, you may sometimes wonder if the world would have been any different – either better or worse –if you had not been born. But with God at work in our lives, we really need not think that way. Indeed, I recently wrote about this matter: billmuehlenberg.com/2018/04/16/what-if-you-had-not-existed/

Those who do like Lewis would likely have read his 1955 autobiography, Surprised By Joy. And as mentioned, there are plenty of biographies on him, be they by Hooper, Kilby, Gresham, Jacobs, Sayer, or McGrath. But as I also said, most do not spend much time on his youth. So this volume, based as it is on primary documents, letters, and so on not before fully utilised, gives us a deeper understanding of how his non-Christian past was used by God to create his Christian present.

That too I have found to be the case in my own life. Thanks be to God that all is not lost, but our past pagan years can be restored, redeemed, and used for His purposes.

3 Replies to “C. S. Lewis and Redeeming the Past”