Where are the bold prophetic voices that are so much needed today?

Now more than ever we need Christian leaders who will stand up and be counted. We need shepherds who will actually lead and not just follow. We need prophetic voices who will sound the alarm. We need watchmen on the wall who will give clear clarion calls about the many dangers we face.

Yet for the most part we have sheep in the pulpits who are afraid to open their mouths, afraid to stand up for the gospel, and afraid to resist the darkness that is descending upon us. They are far more concerned about not rocking the boat and in pleasing men than they are in sounding the alarm as God would have them to do. 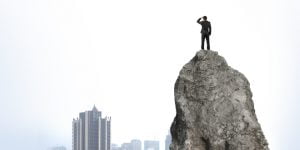 And in all this we of course have solid historical precedent. God constantly warned the religious leaders of ancient Israel about how they too were failing in their calling. He sent real prophets time and time again to rebuke these useless leaders.

Just today I again read from the book of Isaiah. What we find written in Isaiah 56:10-12 some two and a half millennia ago is perfectly relevant for today’s church:

His watchmen are blind;
they are all without knowledge;
they are all silent dogs;
they cannot bark,
dreaming, lying down,
loving to slumber.
The dogs have a mighty appetite;
they never have enough.
But they are shepherds who have no understanding;
they have all turned to their own way,
each to his own gain, one and all.
“Come,” they say, “let me get wine;
let us fill ourselves with strong drink;
and tomorrow will be like this day,
great beyond measure.”

Strong words indeed – and oh so relevant to the church of today. Let me offer a few bits of commentary on this passage. Barry Webb offers these remarks:

For a community under stress, the quality of its leadership is critical. Leaders are to be watchmen (56:10), alert to dangers that threaten from the outside, and shepherds (56:11), nurturing and strengthening the inner life of the community. Where such leadership is lacking, the sort of situation develops which we see here. Instead of being open in the right sense – to people sincerely seeking the Lord – the community becomes open to evil people who want to exploit it (56:9). Good people are attacked, and no-one comes to their defence (57:1-2). Superstition and false religion flourish and become a cover for all kinds of wickedness (57:3-10). The fear of the Lord is lost, and other, unhealthy fears take over (57:11). And finally, God is left with no option but to judge (57:12-13a). It is a depressing picture, painted in broad, bold brushstrokes and sombre tones.

Gary Smith reminds us of how bad this situation was:

The text emphasizes that “all of them” (vv. 10 and 11), all the prophetic watchmen (cf. Ezek. 3:17), are spiritually blind. The phrase “all of them” emphasizes how terrible the spiritual situation is, for none of these prophets know what is really happening. This suggests that they are not listening to what God is saying, so they are not able to warn people about moral issues and the dire consequences of their sinfulness. These watchmen are compared to “dogs,” a very strong derogatory condemnation (2 Sam. 16:9) that evokes pictures of filthy mongrels, the scum of the earth that would eat anything. Usually dogs bark incessantly whenever they hear a strange noise or see something out of the ordinary, but these prophetic “dogs” are worthless because they are completely mute. Since they are not able or willing to bark, they provide no warning about the dangers that are coming.

Because these leaders of the community have allowed their sense of calling to become dim, laziness has overtaken them and destroyed them for their critical task. Pieper well says, “physical laziness is the inseparable companion of spiritual lethargy.” Those who are in the position of leaders of God’s flock today should heed these words. Let us feel the terrific burden of alerting our people to the threats and of equipping them in their spirits to meets these threats, and spirit of lethargy and drowsiness will soon disappear from us.

As I was penning this piece a friend had posted on the social media the following passage. It pretty well sums up why we have so few church leaders who are willing to speak up: “They hate him who reproves in the gate, and they abhor him who speaks the truth.” (Amos 5:10).

That has always been the case. Jesus was put to death for speaking the truth, as were so many prophets and disciples. But we must not flinch at a time like this. We must not succumb to fear. We must not give in to cowardice. Instead we must speak up, regardless of the cost.

Let me close by mentioning two brave Christian champions. They are NOT pastors or church leaders – they are simply professional sportsmen in America. But they put most of our church leaders to shame. Why? Because they dared to be a Daniel when Daniels are in short supply. Both refused to bow the knee (literally) to the spirit of the age. Both stood (literally) for Jesus Christ the Lord. Let me briefly share their stories:

At the Giants vs. Dodgers game in Los Angeles, every player could be seen taking a knee during the anthem and holding a black cloth, except one. “I’m a Christian,” Sam Coonrod, San Francisco Giants relief pitcher, told multiple media outlets after the game. “So, I just believe that I can’t kneel before anything besides God.” “I just can’t get on board with a couple of things that I have read about Black Lives Matter,” he said. “How they lean toward Marxism, and they’ve said some negative things about the nuclear family. I just can’t get on board with that.” www.washingtonexaminer.com/news/im-a-christian-mlb-player-explains-why-he-refused-to-take-a-knee-during-national-anthem

My second example is similar:

Forward Jonathan Isaac was the only Orlando Magic player to neither kneel during the national anthem nor wear a Black Lives Matter shirt prior to Orlando’s game against the Brooklyn Nets on Friday. According to Bleacher Report’s Taylor Rooks, Isaac said after the game that while he believes Black Lives Matter, “kneeling or wearing a Black Lives Matter T-shirt don’t go hand-in-hand with supporting Black lives.” …. “I believe Jesus is the answer. Black lives are supported through the gospel. All lives are supported through the gospel.” nba.nbcsports.com/2020/07/31/magics-jonathan-isaac-kneeling-wearing-blm-t-shirt-not-answer-for-him/

Well done Sam. Well done Jonathan. So where are all the others? Why only two out of thousands? Why will so few stand up for truth in a culture that is awash with lies? Why will so few show us a bit of backbone in a toxic society that is rushing down the gurgler?

9 Replies to “Where Are the Real Shepherds?”