We are in a bad place when we can no longer hear from God:

Spiritually speaking, there are some things that are just as bad, if not worse, than physical tragedies and calamities. For example, a physical famine is of course a terrible thing to go through. But from a biblical perspective, a famine for the Word of God is also terrible – and in some senses even more devastating. We read about that very thing of course in Amos 8:11:

“Look! The days are coming,”
declares the Lord God,
“when I will send a famine throughout the land— 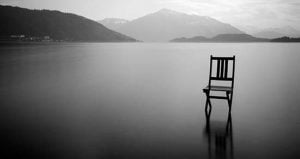 not a famine of food or a thirst for water—
but rather a famine of hearing the words of the Lord.

In my most recent reading through the book of Lamentations I came across a similar theme to what Amos spoke about. In Lam. 2:7-10 we read these words:

The Lord has scorned his altar,
disowned his sanctuary;
he has delivered into the hand of the enemy
the walls of her palaces;
they raised a clamor in the house of the Lord
as on the day of festival.

The Lord determined to lay in ruins
the wall of the daughter of Zion;
he stretched out the measuring line;
he did not restrain his hand from destroying;
he caused rampart and wall to lament;
they languished together.

Her gates have sunk into the ground;
he has ruined and broken her bars;
her king and princes are among the nations;
the law is no more,
and her prophets find
no vision from the Lord.

The elders of the daughter of Zion
sit on the ground in silence;
they have thrown dust on their heads
and put on sackcloth;
the young women of Jerusalem
have bowed their heads to the ground.

I want to highlight the last two verses especially: “the law is no more, and her prophets find no vision from the Lord. The elders of the daughter of Zion sit on the ground in silence.” The context, as the previous verses make clear – and the whole book discusses – is the Babylonian assault on Jerusalem and the razing of the temple.

Because of the continuous sin, idolatry and rebellion of God’s people, the long-promised judgment has now taken place. The temple is gone and many Israelites have been taken captive to Babylon. Those who are left behind are utterly bewildered and dismayed.

Coupled with all the physical devastation is all the spiritual devastation: the silence of God. During dark and desperate times it is God and his word that are needed the most – but now both seem to be missing. Talk about adding insult to injury. Christopher Wright offers this commentary:

When you need a word from God, you turn to those who were custodians of that word: priests, who could teach and interpret the law; prophets, who would bring a more direct word from the visions God gave them; and elders, who have the wisdom and experience to provide advice and guidance for the rest of the people. But all three groups of leaders have fallen silent in the teeth of such overwhelming disaster. And their silence is the silence of God himself. After all, God had been speaking through the law and the prophets for generations to ears that would not listen. Now they would listen in vain for any word from God at all.

Robin Parry also speaks to this:

Even the prophets did not get visions from YHWH. There is a loss of both civic (king and rulers) and religious (implicitly priests, and explicitly prophets) leadership. It is theologically interesting that the divine judgment manifests itself in divine silence. The God who speaks to his people through tôrâ and through prophet becomes quiet, and it is a deathly quiet. This judgment of silence is manifest in the book of Lamentations as a whole, in which YHWH is the one actor that the implied reader is desperate to hear speak, and thus YHWH’s lack of voice is very conspicuous. In this way Lamentations embodies the ongoing judgment by means of the words it does not contain.

And John Mackay speaks about the false prophets who were so predominant and popular back then, instead of God’s real prophets:

Although they claimed to be spokesmen of the Lord, he had not commissioned them (Jer. 23:21-22) and they derived their messages by copying them from one another (Jer. 23:30). In the aftermath of the collapse of the city, they had nothing to say because the claims of their theology had been falsified by events, and they could not find any word of guidance or encouragement to pass on to others (cf. Ps. 74:9). Those referred to here are not figures such as Jeremiah or Ezekiel who continue to exercise genuine prophetic ministries.

One more quote about true versus false prophets can be mentioned here. Tremper Longman says this about the passage:

The prophets in the period leading up to the catastrophe were a mixed bunch. On the one hand, Jeremiah, Ezekiel and others were faithful in proclaiming God’s true vision of the future. The people did not listen to them, but to the countless others (see Jer. 28) who offered false words of security. For now, the poet tells the reader, God is not giving prophetic visions in Israel, though Daniel is said to receive them in Babylon and a number of Minor prophets are dated to the postexilic period, among them Haggai, Zechariah, Malachi.

It does not take much imagination to offer some contemporary application of all this. In many ways it seems that God is becoming silent in the West as well, with more and more people deciding he does not exist, and/or that he should have no claims over their lives. And so many of the shepherds in the Western churches are false shepherds. False prophets seem to abound.

We have so many churches filled with people who want their ears to be tickled. They want their pastors and leaders to tell them what they want to hear, not what they need to hear. They want pleasant, sweet nothings whispered in their ears, and not the sure Word of the Lord.

They are just as much not hearing the true and living God as the ancient Israelites. They are just as much living with silence as were people back in Jeremiah’s day. And it shows big time in the sorts of lives they are living. They seem to be indistinguishable from any non-Christian. They think, talk, act and even dress just like all the pagans around them.

We have books like Jeremiah and Lamentations to warn us about all these things. But of course most of these folks would never bother to read such books. ‘Oh, they are so negative and depressing. I only want happy, uplifting and fun stuff to read and think about.’ These folks have silenced God. It is just as Amos warned about so long ago: ‘I will send a famine of hearing the words of the Lord.’

That is a frightening prospect indeed. Lord have mercy on your people.

8 Replies to “When the Word of God is Silenced”