As if things could not get worse in Victoria – now we have these wretched TV ads!

I have been saying for many months now that the hypocrisy of our leaders, media elites, and celebs knows no bounds. They keep lecturing us about how we are all in the same corona boat, when clearly, we are NOT. They may well be in luxury yachts and cruise ships, but most of us are in leaky row boats, getting nowhere fast. 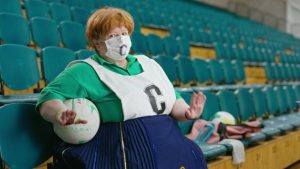 And that is literally the case for so many of these snobbish elites who lecture us: they DO in fact have and enjoy their nice yachts, along with the fancy mansions, right on the seaside. So even if they were locked down just like the rest of us, who would not want to be in their shoes living like that? Hey, I would be more than happy to swap places with them.

They can go on nifty walks on their 200-acre properties, play basketball or tennis on their own personal courts, go for a swim in their own spiffy pools, or do a round of golf or maybe even some bowling on their own mini setups, all made possible by their lavish and luxury lifestyles.

But for us mere peons we must stay trapped in our 5km prison and under strict curfew. We dare not travel far from home, and we dare not go outside at 8:01pm for fear of being arrested. Do you really think all these bigwig celebs and politicians have to worry about this for one moment? Um no. They can go for a midnight stroll along their beachfront properties all they like. They can drive as far as they want out into the bush without fear of being stopped by the Covid gestapo.

And yet these clowns have the gall to preach to us, telling us to just sit down and shut up and do as we’re told. We are to put up with whatever our benevolent dictators command of us. I for one have had a gutful of this, as have millions of others – Victorians especially.

And to rub salt into our wounds, we now have these wretched and irritating new television ads put out by the Victorian government. Good grief, how infuriating. More double standards from our clueless elites. Thankfully they are already being widely panned – and they have not even been out all that long. Consider this from one British newspaper:

Daniel Andrews has been blasted over a ‘condescending’ and ‘lame’ ad campaign set to feature The Project host Waleed Aly lecturing Victorians about Melbourne’s lockdown. The campaign also includes Kath and Kim’s Magda Szubanski, AFLW star Tayla Harris, and comedians Shane Jacobson and Nazeem Hussain, who encourage the public to wear masks and stay at home. The ‘Staying Safe is in Our Hands’ Campaign has been widely panned by Victorians, accusing the premier of being ‘tone deaf’ and spreading ‘propaganda’. The first video stars Szubanski reprising her iconic role of Sharon Strzelecki from Kath and Kim. www.dailymail.co.uk/news/article-8655443/Daniel-Andrews-savaged-cringeworthy-ad-campaign-featuring-Waleed-Aly.html

And a great piece was just penned on these deplorable ads by James Macpherson. He begins as follows:

Not content with locking citizens in their homes and destroying their livelihoods, the Victorian Government has now employed television’s most dim-witted character to lecture them about their behaviour. An advertising campaign launched at the weekend features comedian Magda Szubanski as the moronic “Sharon”, from Kath and Kim, telling Victorians: “The sooner we obey the rules the sooner this will all be over.”

The ad, which is about as funny as being fined by police for visiting your mum on Mother’s Day, shows Sharon playing a game of netball against herself. “I tell you what, I am so over this lock down,” she huffs. “Playing netball against yourself is not all it’s cracked up to be, especially when you still can’t even win.” This, of course, is hilarious.

Obviously the Andrews Government expects voters – having momentarily forgotten that they are banned from travelling more than 5km from home, or from being out after dark – to be rolling around on their sanitised floors, laughing uncontrollably through their face masks. But then comes the serious part.

The moronic Sharon looks down the camera and tells Victorians in a serious voice: “But you know what, it’s not the lock down that’s the enemy, it’s the virus and the sooner we obey the rules the sooner this will all be over and we can get back to the stuff that really matters ……”

What seems lost on Szubanski, and certainly on the Victorian Government, is that it’s galling to be told “the sooner you obey the rules the sooner you’ll be allowed out of home detention” by a government whose own bungling has spread the virus. And even worse, when the “tut-tut” message is delivered by the stupidest character on Australian television. It implies the long-suffering public, whom Premier Andrews has repeatedly blamed for spreading the virus, are even stupider. It is patronising and it is misguided. goodsauce.news/tone-deaf-daniel-andrews-lectures-victorians-through-australias-biggest-moron/

Yes exactly right James. These lousy ads are just another waste of our tax dollars by these big cheeses who do not have the slightest clue what life is like for the masses of enslaved grubs like you and me. All that Andrews and Co are doing is turning most Victorians off even further as we see daily the ever-widening divide between our arrogant and out of touch political leaders and celebs, and the common man who continues to endure these dreadful imprisonment conditions.