We need to fear God, sharing his truth, and not fear man:

Recently I wrote a piece entitled “Just Do It”. It was inspired by my reading of the book of Jeremiah. The prophet was told that the people would reject him and his message, but he should proclaim the Word of the Lord nonetheless. He was to ignore the opposition and enmity and just do it. You can see that piece here: billmuehlenberg.com/2020/08/12/just-do-it/ 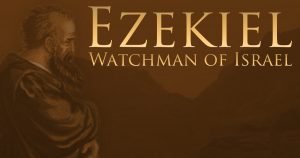 This article is inspired by what is found in the book of Ezekiel – especially early on. There we read about the call of Ezekiel to his prophetic task. In chapter 2:1-7 we read these words:

As can be seen, not once but twice Yahweh tells Ezekiel to speak to the sinful and rebellious people of Israel, whether or not they listen and heed the word (verses 5 and 7 – and the same is found in 3:11). Many of God’s choice prophets were warned ahead of time that the people would not listen and would be opposed, but they should not fear, but persevere.

So Ezekiel also gets this warning at the outset. Thankfully he and the other prophets obeyed God, stuck with their divine commission, and ignored the crowds who rejected them and hated on them. It goes without saying that Christians today need to carry on in the same fashion. We too have a job to do and a message to proclaim, and that we should do, regardless of the response.

That is the first lesson we get from this passage. As Lamar Eugene Cooper remarks:

With the message destined for such an unwelcome audience, there should be no surprise that God warned the prophet of the rejection he would face. His success would not be measured in terms of the people’s response but in terms of his obedience. Though he was told that no one would welcome his messages from God, the prophet still was responsible for delivering them. Once delivered, the messages placed the burden of response on the people (v. 5)….

Ezekiel would not be held accountable for the people’s lack of receptivity; he was responsible only to speak the words God gave him, “so that they will know that a prophet has been among them” (vv. 5, 7). The measure of success in God’s work is not always in terms of the amount and frequency of visible response. Success is to be measured in terms of our obedience to the words, commands, and will of God regardless of the visible results. So the mission of the prophet was to proclaim the word of God to a rebellious and unresponsive Israel.

Yes we must always keep that truth in mind. A second and related lesson is we should not fear. God is with his spokesmen, and because of that, all the opposition of men and devils shrivels in comparison. As Douglas Stuart comments:

In light of the characterization of the Israelites as rebels (vv. 3, 5, 6, 7), transgressors (v. 3), and impudent and stubborn (v. 4), it is no wonder that Ezekiel might be afraid to go to them as a prophet. Who wants a career full of hostility? Who could enjoy the kind of angry criticism and contempt that would be as painful to endure as thorns or scorpions? What modern-day pastor would choose to take a parish where he or she was guaranteed a hostile rejection from the congregation? Is it easy for a missionary to set off for a tribe or territory where he or she is sure to meet not merely hostile disapproval of God’s message, but rejection personally? There are many modern-day saints who understand from experience exactly what Ezekiel was called to endure, but there are few who enjoyed the process. Rare is the person who can set out on a task knowing that people will hate him or her for doing it. But this is exactly what Ezekiel was called to do. His faithfulness stands as a challenge to ours.

Absolutely. Indeed, it makes me wonder: would I have accepted the call of God upon my life nearly a half century ago if I knew back then all the opposition, hatred, resistance, enmity and abuse I would get for it? I may well have been inclined to say, ‘No thanks Lord.’

So it is perhaps a good thing I did not know back then what I would be going through as I sought to obey the Lord and do his work. And recall that the 1970s was before the days of the internet and social media. Back then I could get haters writing me nasty letters and the like. Today I can be bombarded relentlessly, 24/7, for daring to speak truth.

A final lesson that flows from the first two is this: we are to leave ‘success’ up to God. He determines the fruit of our ministry. Our job is merely to do the sowing, planting, watering, and so on. The results are in God’s hands. Iain Duguid puts it this way:

In order to carry through such a ministry where there is little success in the eyes of the world, a strong sense of calling is essential. Why should we preach the gospel to those who stubbornly refuse to hear? Because God has called and sent us, and he has the right as our Sovereign King to use us as he sees fit. He is not only the One who calls us to the task and strengthens us for it; ultimately he alone is the One whom we are seeking to please. Thus, in Isaiah 49, when the Servant of the Lord struggled with the idea, “I have labored to no purpose; I have spent my strength in vain and for nothing,” his reply to himself was, “Yet what is due me is in the Lord’s hand, and my reward is with my God” (49:4). The Puritan William Greenhill comments:

“Sometimes God gives large encouragement, promises, hope, success, providing for our infirmities; at other times a bare commission and command must suffice to do that which would make one’s heart ache: it is his prerogative to send whom he will, and upon what service he will.”

Yes exactly. So let this be an encouragement to you. If you have a clear sense of what God has called you to do, then do it faithfully and wholeheartedly. Never mind the opposition, the enmity, the hate, and the abuse. And never mind if it seems like the ministry God has given you is not bearing much fruit. God will take care of the results – we are to take care of the task that God has entrusted to us.

If you have not yet read the book of Ezekiel, let me encourage you to do so. To learn more about what the book is all about, have a read of this piece: billmuehlenberg.com/2018/07/19/bible-study-helps-ezekiel-and-daniel/