The Andrews’ push for total control of Victoria should shock every single one of us:

Hmm, when you have hard-left media outlets like the Age and leftist commentators joining more conservative ones like the Australian in denouncing the shocking move by Dan Andrews to make his lockdown tyranny indefinite – if not permanent – then you know he really has gone into full-blown dictator mode. 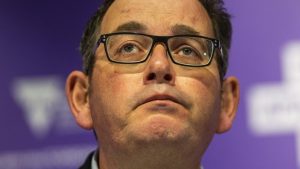 It seems most folks who are still capable of independent thought and are not just zombie-supporters of Andrews and Labor are finally waking up to what is really happening here. Indeed, we now know the endgame of Dictator Dan: to seize complete power and control – for good. Oh, and to turn Victoria into the next Venezuela or North Korea.

Let me share some quotes from just a small portion of the many vocal critics of this unprecedented power grab by a state premier who is utterly drunk on power. This is what James Moutsias writing in the Melbourne Age had to say:

Premier Dan Andrews has said he intends to extend Victoria’s ‘‘state of emergency’’ for an extra 12 months past the September 13 deadline. Whether that ends up happening will reveal just how much our society values democracy….

The restrictions and controls being made by the DHHS are made under executive power – and this power is about to run out. This means that the state parliament is going to need to pass a new law amending the Public Health and Wellbeing Act to extend the amount of time a state of emergency may be in place for. This shouldn’t be allowed to happen.

The act sets out limits on executive power, and does so for ‘‘a damn good reason’’ as Opposition Leader Michael O’Brien said on Sunday – decisions by bodies such as the DHHS do not get voted on by the Houses of Parliament, meaning they do not come under immediate democratic scrutiny. To simply change the statute to suit the executive is a gross violation of the principle of the separation of powers, a supposedly fundamental democratic concept. While partially intertwined in practice, the legislature should not act in the interests of the executive….

The constant threat of emergency restrictions cannot be allowed to hang over the heads of Victorians. The legislation does not allow it, and it should not be altered to do so. To simply tamper with the limits set on executive power, when it suits them, is repugnant to the principles that are supposed to underlie our system of government. It’s times like these that test whether we actually care about those principles, or if they are merely appealing words that have no substance. www.theage.com.au/national/victoria/state-of-emergency-laws-endanger-our-democracy-20200824-p55otx.html

Former Victorian Premier Jeff Kennett was livid over this power grab: “The premier said today he may keep the state of emergency until we have a vaccine – we may never have a vaccine. Are we all going to be locked up at the whim of the premier? Without any checks and balances? This is an act of a megalomaniac.” www.dailymail.co.uk/news/article-8658917/Hes-megalomaniac-Dan-Andrews-accused-trying-grab-dictatorial-power.html

The Liberal Nationals will vehemently oppose and vote to defeat the Andrews Labor Government’s attempt to extend State of Emergency powers for a further 12 months. The State of Emergency vests enormous power with the Premier and a small number of unelected officials with very little oversight and accountability – proven in recent months with the effective shutdown of the Legislative Assembly. . . . No government should write itself a blank cheque for such extraordinary powers over Victorians’ lives and livelihoods. Oversight and accountability are paramount….

Daniel Andrews caused this second wave by his government’s incompetence managing hotel quarantine and now he wants to extend his power without being accountable for it. Victorians deserve democracy, they deserve accountability, they deserve transparency but instead what we get from Daniel Andrews is another attempt to extend his power over the lives of Victorians. www.michaelobrien.com.au/liberal-nationals-to-oppose-state-of-emergency-power-grab-by-andrews/

Even the leftist politics professor Peter van Onselen has had to weigh into this, and warned Andrews to back off. Writing in The Australian he said this:

The Victorian Premier’s demand that the state of emergency currently in effect gets extended for an additional 12 months is ridiculous. It’s anti-democratic, autocratic and unnecessary… doubling it to 12 months makes no sense, unless the purpose is to hand the Premier absolute power during this pandemic, and perhaps even beyond it. The Premier needs to eat humble pie and backtrack on this issue. If he won’t, the state’s Legislative Council needs to vote down his power play.

Andrews didn’t feel the need to explain himself when making the announcement, which is a symptom of not respecting the checks and balances that exist in our political system. Herein lies the problem. Parliamentary democracy matters, yet the Victorian parliament has been put in hibernation by Andrews, thrusting executive government front and centre.

And concerned observers from overseas are also taking note of this appalling move to tyranny and total control. As one said:

Victoria’s Dan Andrews has brought in some of the most draconian Covid-19 lockdown restrictions on the planet and now wants the right to keep them in place for a further 12 months. This public health tyranny needs to be stopped. I regret to report that Melbourne’s answer to Mao Zedong has decided that he really rather enjoys being able to tell people exactly what they have to do and has no intention of stopping any time soon. Chairman, sorry, Premier Dan Andrews of Victoria is trying to railroad a bill through the legislature that would allow him to keep the current state of emergency going for another 12 months….

The restrictions also don’t seem to be working. Along with having the most stringent lockdown in Australia, Victoria has had by far and away the most cases and deaths with 430 people so far recorded as having died with Covid-19. The second worst hit state, New South Wales, has had just 52 deaths but has not had a lockdown anywhere near the one in place in Victoria. www.rt.com/op-ed/498919-dan-andrews-melbourne-lockdown/

Listening to 3AW briefly yesterday, I heard one angry caller after another absolutely livid that this guy had the gall to push for more dictatorial powers, given the immense amount of damage he has already done. And when I shared a few thoughts on the Andrews FB page, I saw plenty of folks tearing into him there as well. Perhaps, finally, people are waking up – enough is enough.

Despite all these legitimate and vitally important concerns about the death of freedom and democracy, it seems these Labor tyrants are not at all bothered – they are just doubling down. For example, we have had the Victorian Health Minister Jenny Mikakos pushing the panic-porn button, insisting that these changes MUST go through: “Those Members of Parliament need to understand they will be putting Victorians’ health at risk if they do not support this legislation.”

Yeah right – the only ones putting people’s lives at risk are Andrews and Co. Indeed, because of their sheer incompetence and continuous stuff-ups, we have had this massive second wave with hundreds of lives lost and hundreds of thousands of livelihoods lost. These derelict and dysfunctional leaders have blood on their hands.

The sad truth is this: Andrews is a power-hungry megalomaniac right up there with others who have put the lust for power above all else. Lenin and Stalin would be quite envious. Resign now, before more people die from your incompetence and arrogance.

We better learn quick from history here. In 44 B.C Julius Caesar declared himself dictator perpetuo (dictator for life). On August 24, 2020 Victorian Premier Dan Andrews did much the same thing. He wants even more draconian powers to bypass the parliament and constitutional freedom, all to ‘keep us safe’ from a virus with a 99% recovery rate.

We dare not forget the lessons of history.

There is much that we can do here. For example, there are now various petitions circulating about all this, including some that are seeking his resignation. Please sign and share these. One is found here: www.change.org/p/daniel-andrews-resign

Another one is found here: form.jotform.com/202360471399861?fbclid=IwAR2Ulj2nUXgIYOdI8UMxxkWK3FeyOitX6DD9Wns3-esHb7mP3_h5MRAKwlk

Also, if this goes to the Upper House, there is a chance it might be defeated. The cross-benchers there tend to side with Labor. But some may be open to resisting this move to fascism. Here are the details for eight of them. Please contact them and let them know you are 100% opposed to this crushing of democracy:

Wow! I just read this in a new book about Christians who helped Jews during WWII. Sounds like a blend between Dictator Dan’s Victoria and what our elites are saying should happen to those hesitant about taking rushed Covid vaccines:

For the Jews, further restrictions soon followed. From July 1942, Jews were banned from parks, theatres and cinemas, cafés and restaurants, swimming pools, racecources and campsites, museums and libraries. They could travel only at limited, inconvenient hours and occupy only the last carriage of railway trains. They were not permitted to use the main streets or to leave home after 8 p.m. Jews were barred from almost all public places and could shop for only one hour a day. In effect, they became invisible in public. (Tim Dowley, Defying the Holocaust. SPCK, 2020, p. 34)

25 Replies to “Smashing Democracy In Victoria”