How many folks simply seek to whitewash major issues that demand proper attention?

There are various ways one can deal with much-needed home repairs, especially when major structural damage and the like needs urgent attention. One way is to do whatever is necessary to deal with the fundamental problems and make sure the structure is once again fully stable, secure and sound. 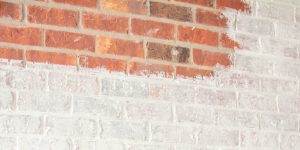 Another way is to just do the quickest and easiest of cover-up jobs: plaster over major cracks, cover over real building faults, and so on. Simply do a whitewash, in other words. This involves superficial work when something much more substantial is required. It involves covering up or glossing over major problems.

Dodgy and unreliable tradesmen for example might do this, instead of doing the necessary, and more involved work. The whitewash may temporarily cover things over, and it may look like the problems have been solved, but of course soon enough it will become quite apparent that this was not at all helpful – it only made matters worse.

There are spiritual applications of all this of course. Since I happen to be reading through the prophetic books of the Old Testament once again, it is not surprising that many of my recent articles are on what the prophets have said. And the prophets often spoke of useless, superficial cures for deep-seated spiritual problems.

They have healed the wound of my people lightly,
saying, ‘Peace, peace,’
when there is no peace.

I came upon more of this in today’s reading in Ezekiel. It is clear that he too was greatly concerned about whitewashing things. Ezekiel 13 is all about the false prophets that he had to keep dealing with, and in verses 8-16 he deals with the seriousness of Israel’s sin and disobedience, and how it is simply being whitewashed by the false prophets. The verses read as follows:

Therefore thus says the Lord God: “Because you have uttered falsehood and seen lying visions, therefore behold, I am against you, declares the Lord God. My hand will be against the prophets who see false visions and who give lying divinations. They shall not be in the council of my people, nor be enrolled in the register of the house of Israel, nor shall they enter the land of Israel. And you shall know that I am the Lord God. Precisely because they have misled my people, saying, ‘Peace,’ when there is no peace, and because, when the people build a wall, these prophets smear it with whitewash, say to those who smear it with whitewash that it shall fall! There will be a deluge of rain, and you, O great hailstones, will fall, and a stormy wind break out. And when the wall falls, will it not be said to you, ‘Where is the coating with which you smeared it?’ Therefore thus says the Lord God: I will make a stormy wind break out in my wrath, and there shall be a deluge of rain in my anger, and great hailstones in wrath to make a full end. And I will break down the wall that you have smeared with whitewash, and bring it down to the ground, so that its foundation will be laid bare. When it falls, you shall perish in the midst of it, and you shall know that I am the Lord. Thus will I spend my wrath upon the wall and upon those who have smeared it with whitewash, and I will say to you, The wall is no more, nor those who smeared it, the prophets of Israel who prophesied concerning Jerusalem and saw visions of peace for her, when there was no peace, declares the Lord God.”

Deep spiritual surgery was required (to switch metaphors) but the false prophets simply offered meaningless and worthless whitewashing. That would never do, and Ezekiel must call out these religious leaders and prophets who in fact care nothing for the people.

The deceptive proclamations of peace (cf. Mic. 3:5, Jer. 6:14; 8:11) that such false prophets have always been noted for are like shaky, poorly built walls covered with whitewash (NKJV, “untempered mortar”). The whitewash makes the walls look good, but in fact they cannot withstand even heavy weather (vv. 10-11, 13-14). When Paul called the high priest in Jerusalem a “whitewashed wall” (Acts 23:3), he was similarly indicating that Ananias was a phony, since his command to punish Paul was inconsistent with the Law he was pledged to uphold. The false prophets were inconsistent with God’s truth. They made their living from contributions, and when they gave assurances of peace and prosperity people paid better than when they predicted gloom and distress. Thus their “whitewashed wall” would fall, and their own fall (v. 14) would be symbolized thereby as well. False reassurance (the wall) and false prophets (those who white-washed it, v. 15) would alike be destroyed by God when the reality of Jerusalem’s destruction came to pass.

The application for today’s Christian leaders and pastors and teachers could not be more obvious. Just like the false prophets of old spoke only soothing and pleasant words to tickle the ears of their listeners, and to keep the financial offerings flowing in, so too today there is the same temptation.

Who does not want to hear every week about how you can have your best life now, be wealthy and successful, and get all the goodies in life you possibly can? Most folks. And who wants to regularly hear the message of Jesus about sin, repentance, coming judgment, the need to pick up your cross, deny yourself, and follow him? Not very many.

Lamar Eugene Cooper speaks to what was happening back then:

These fraudulent spokesmen gave false hope of a peace that was not to be (Ezek. 13:10). Their words were like an unstable wall. The “wall” they built would not protect the people but was something that would collapse at the slightest touch, though they had dressed it handsomely. When the stormy weather came, the wall would collapse (cf. Jesus’ lesson of the two foundations in Matt. 7:24-29). The analogy of the wall was extended to refer to Jerusalem in Ezek. 13:14. God declared his intention to bring down the wall (i.e., the city of Jerusalem). The people, their leaders, and the false prophets would be judged (vv. 15-16).

Yes, and how similar is this to so much of today’s Christianity? We do not preach and teach the full counsel of God, including the basic biblical truths that all real followers of Christ will be hated and persecuted. Instead we proclaim a false gospel which says, ‘Come to Jesus and all your problems will be solved, you will always be happy, and you can live a life of luxury and ease.’

That is a whitewash, and when the storms of life come along these shallow professors of faith will come crashing down. They will not be prepared for the real life of Christian discipleship, and will simply wilt at the first hints of opposition, affliction, hardship, or trials.

And those false shepherds who proclaim such patently false words will be judged for their fake gospel and their crass men-pleasing. You would not want to be in their shoes when they one day stand before their Lord and Judge. They need to repent – now – and start proclaiming the hard words of biblical truth, instead of a sugar-coated gospel which is nothing but a deceitful and devilish whitewash.

Let me finish with some words from the great Martyn Lloyd-Jones as found in his Studies in the Sermon on the Mount: