We could use a few more Reagans today to help keep Leviathan in check:

To understand the leftist rage against Ronald Reagan as he won the White House in 1980, and again in 1984, you need to know something of American history, and the ideological war over the nature and extent of the State. For almost a century prior to this the vision of the Founding Fathers for limited government was being turned on its head. 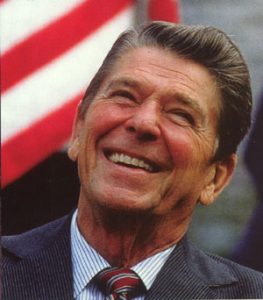 For many decades the United States did a pretty good job of keeping the state in check while maximising individual liberties and running on free market principles. But by the turn of last century things began to move away from what the Founders envisaged, and the powers and scope of the state started to expand greatly.

Government interventionism picked up steadily from around the time of WWI and went on from there. Already by the time of FDR and his New Deal, the foundations had been laid for the rise of the welfare state. Johnson’s Great Society simply added to this structure, while Presidents like Obama further iced the statist cake in so many ways.

The upward march (or downward spiral, depending on your point of view) of the state as Leviathan has mainly been all one way, but occasional stalls to the direction have been noted. Trump of course saw the bigger picture here: it was not just the Democrats and establishment Republicans that needed attention – the ‘swamp’ itself needed draining.

Plenty of writers, historians and commentators have addressed all this. One thinks of the superlative volume by British historian Paul Johnson, A History of the American People (Harper Collins, 1997). But if you do not have the time or the desire to read through his 1100 pages, perhaps just one chapter from a new book will fit the bill.

I refer to Ben Shapiro’s How to Destroy America in Three Easy Steps (Broadside Books, 2020). In it he looks at three key areas which radical leftism (what he calls “disintegrationism”) and conservatism (what he calls “unionism”) so strongly differ on.

These three key elements are: “America’s philosophy of reason, equality, liberty, and limited government; America’s culture of individual rights and social duties; and America’s shared history.” In Chapter Five he looks at the conservative view of American history and offers us a helpful but brief look at how this increase in government power and intervention took place.

He notes how Ronald Reagan surprised – and infuriated – the left when he helped to put a pause to this growth in statism and big government. What Reagan said and sought to achieve was a breath of fresh air compared to decades of statism. He rejected the mindset that more government was the answer to all our problems.

While he did not always succeed in taming Leviathan (in part because of opposition from Congress and the mainstream media), his intentions were certainly right. Decades on, his speeches are still a source of inspiration and encouragement, so let me quote from one of them.

In his First Inaugural Address delivered on January 20, 1981 he said in part:

The economic ills we suffer have come upon us over several decades. They will not go away in days, weeks, or months, but they will go away. They will go away because we, as Americans, have the capacity now, as we have had in the past, to do whatever needs to be done to preserve this last and greatest bastion of freedom.

From time to time, we have been tempted to believe that society has become too complex to be managed by self-rule, that government by an elite group is superior to government for, by, and of the people. But if no one among us is capable of governing himself, then who among us has the capacity to govern someone else? All of us together, in and out of government, must bear the burden. The solutions we seek must be equitable, with no one group singled out to pay a higher price.

We hear much of special interest groups. Our concern must be for a special interest group that has been too long neglected. It knows no sectional boundaries or ethnic and racial divisions, and it crosses political party lines. It is made up of men and women who raise our food, patrol our streets, man our mines and our factories, teach our children, keep our homes, and heal us when we are sick–professionals, industrialists, shopkeepers, clerks, cabbies, and truckdrivers. They are, in short, “We the people,” this breed called Americans….

We are a nation that has a government–not the other way around. And this makes us special among the nations of the Earth. Our Government has no power except that granted it by the people. It is time to check and reverse the growth of government which shows signs of having grown beyond the consent of the governed.

Now, so there will be no misunderstanding, it is not my intention to do away with government. It is, rather, to make it work-work with us, not over us; to stand by our side, not ride on our back. Government can and must provide opportunity, not smother it; foster productivity, not stifle it.

If we look to the answer as to why, for so many years, we achieved so much, prospered as no other people on Earth, it was because here, in this land, we unleashed the energy and individual genius of man to a greater extent than has ever been done before. Freedom and the dignity of the individual have been more available and assured here than in any other place on Earth. The price for this freedom at times has been high, but we have never been unwilling to pay that price.

It is no coincidence that our present troubles parallel and are proportionate to the intervention and intrusion in our lives that result from unnecessary and excessive growth of government. It is time for us to realize that we are too great a nation to limit ourselves to small dreams. We are not, as some would have us believe, doomed to an inevitable decline. I do not believe in a fate that will fall on us no matter what we do. I do believe in a fate that will fall on us if we do nothing. So, with all the creative energy at our command, let us begin an era of national renewal. Let us renew our determination, our courage, and our strength. And let us renew; our faith and our hope.

Inspiring words indeed. Shapiro says this about the Reagan Revolution:

This amounted to nothing less than an utter reversal of American movement toward progressivism—a movement that had continued virtually unabated for eight decades, with the brief exception of the 1920s. Reagan’s economic agenda was threefold: first, lowering taxes in order to stop punishing businesses for success, and to incentivize investment and growth; second, to relieve regulatory burdens that had hamstrung entrepreneurs; and finally, to stop inflation in its tracks, granting the predictable basis for economic growth missing since the advent of government growth under LBJ. By the end of Reagan’s administration, the American economy was booming—America had produced 14 million new net jobs. The Dow Jones traded at just over 900 the month Reagan took office; when he left, it was over 2,200. The financial industry boomed as investment capitalism replaced managerial capitalism. Reagan’s greatest failure lay in his inability to rein in federal spending—which has continued to skyrocket to this day.

Yes, Reagan was not perfect. No political leader is. But in an age where the West is actually falling for the lie that socialism is the way forward – be it from an AOC or a Sanders or a Corbyn or some Greens leader – we sure can use many more Reagans right about now to stem the tide of unchecked statism, and help us return to what the Founding Fathers had in mind for this great nation.