Scripture speaks about those who ‘would not’ and ‘could not’ believe:

My title may be a bit much for some folks to get their head around, so let me break it down a bit. It is about the biblical truth that God may as an act of judgment actually cause people to be spiritually blind. Put another way, God may well allow folks who are steeped in their sin and rebellion to fully remain that way. 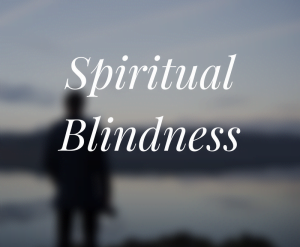 In either formulation, we see God at work while people make their own choices. That may not be to everyone’s liking, but it is a truth found throughout the Bible. I came upon it again while reading through John’s gospel. In John 12:36-43 we find these words:

When Jesus had said these things, he departed and hid himself from them. Though he had done so many signs before them, they still did not believe in him, so that the word spoken by the prophet Isaiah might be fulfilled:

“Lord, who has believed what he heard from us,
and to whom has the arm of the Lord been revealed?”

Therefore they could not believe. For again Isaiah said,

There we read two rather astounding things: the people did not believe (v. 37), and the people could not believe (v. 39). The first appeals to Isaiah 53:1 while the second appeals to Isaiah 6:10. Both speak to the same reality. John is explaining why so many Jews refused to believe. John offers us here a theology of unbelief, and that includes – at least to some extent – some judicial hardening and blinding by God.

But as always when we read about God’s sovereign actions, we must not overlook what is associated with them: human moral culpability. People are responsible for what they do, yet God can also work their choices into his ultimate purposes and plans.

Such matters are hard for finite minds to grasp, but given that this massive theme of divine sovereignty and human responsibility somehow cohering is found everywhere in Scripture, we must take hold of it, and not run away from it or seek to deny it.

God is fully just in all he does, and we are fully accountable for all that we do. While we may have trouble reconciling those two realities, they are part of the bedrock of biblical theology. So let me here offer some commentary by a few wise and learned voices.

One person who is well-versed in these matters is D. A. Carson. His PhD thesis was on this topic, with special emphasis on the Gospel of John. That became his 1981 book, Divine Sovereignty and Human Responsibility. And he also penned an important commentary on John in 1991. In the former volume he offers this big picture assessment:

The sovereignty-responsibility tension in the fourth Gospel embraces two different conceptions of the scope and perhaps the objects of divine love. There is a sense in which God’s love is directed toward the ‘world’ per se; but to absolutise the passages where this is enunciated is to fail to recognise the even more numerous passages in which the divine love is restricted to the elect, while unbelievers sit under wrath and judgment….

Negatively, John does not use man’s responsibility to formulate a doctrine of free will (as absolute power to the contrary), neither does he deduce from God’s sovereignty that men are robots. The horribleness of the so-called decretum horribile largely disappears if men remain responsible for their sins and choices. The positive use to which John puts his teaching maximises human responsibility and God’s sovereignty and grace, providing both warning and comfort….

The sovereignty-responsibility tension in John serves to magnify man’s sin and God’s grace.

And in his commentary on John he says this about the passage in question:

The assumption that God may judicially harden men and women frequently surfaces in the New Testament (e.g. Rom. 9:18; 2 Thes. 2:11). If a superficial reading finds this harsh, manipulative, even robotic, four things must constantly be borne in mind: (1) God’s sovereignty in these matters is never pitted against human responsibility (cf. notes on v. 38); (2) God’s judicial hardening is not presented as the capricious manipulation of an arbitrary potentate cursing morally neutral or even morally pure beings, but as a holy condemnation of a guilty people who are condemned to do and be what they themselves have chosen; (3) God’s sovereignty in these matters can also be a cause for hope, for if he is not sovereign in these areas there is little point in petitioning him for help, while if he is sovereign the anguished pleas of the prophet (Is. 63:15-19) – and of believers throughout the history of the church – make sense; (4) God’s sovereign hardening of the people in Isaiah’s day, his commissioning of Isaiah to apparently fruitless ministry, is a stage in God’s ‘strange work’ (Is. 28:21-22) that brings God’s ultimate redemptive purposes to pass. Paul argues rather similarly in Romans 9:22-33.

And the comments by Gary Burge are also worth presenting here:

The theological message of John 12:38-40 is thus anchored to Isaiah’s experience. God called Isaiah to speak to Israel but forewarned him that his words would find no acceptance. People would hear, but fail to understand; they would see, but fail to comprehend. Therefore Isaiah did not fail; rather, he fulfilled God’s purposes. Likewise, Jesus did not fail in his ministry, but he was continuing the prophetic experience of Isaiah; he was simply filling up or completing what Isaiah described in his own time. The Jews should therefore hear John’s words and see them as an exhortation to repent of their disbelief and turn to the messenger who can save them….

God’s sovereignty and human responsibility are held together consistently. Jesus calls for people to believe (12:36), and we learn that many do indeed make this choice (12:42). Throughout the Gospel John never compromises the demand Jesus makes for decision and faith.

However, John describes what we might call a “judicial” hardening that settles on a people who are already guilty. When revelation comes, we must believe. But if we refuse to believe, the light disappears (12:35–36); and when God’s light departs from the world, the darkness (which is the default state of the world) closes over unbelieving hearts….

Paul makes a similar argument in Romans 1. The consequence of the world’s sin and unbelief is God’s judgment, in which he “gives them over” to their sinful instincts (Rom. 1:24, 26, 28).

Since Romans 1 is indeed another important text on all this, let me finish with the sombre words of R. C. Sproul concerning Paul’s strong warning in Romans 1:

In light of this weighty biblical reality, so clearly taught by Jesus, Paul and other scriptural authors, we all need to give careful heed here. The thought of being judicially blinded and hardened should put the fear of God into all of us.