When career comes ahead of kids – big time:

A veteran superstar of stage and screen has revealed that if she did not take the steps of killing her adolescent son, she never would have risen through the ranks and become one of the world’s great movie actors. She said it was important as a woman to be a trailblazer and reach the top of her profession. 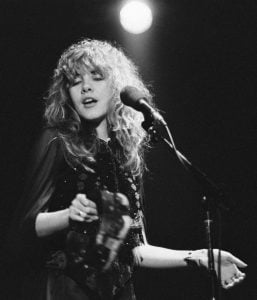 She said the choice to bump off her young son was not all that hard to make because of all the good that came out of it: “I knew that the movies we were going to bring to the world was going to heal so many people’s hearts and make people so happy. And I thought: you know what? That’s really important.”

That was her mission in the world, she said, and she feels it was a great choice to have made: “If I had not had that murder, I’m pretty sure there would have been no Academy Awards, no Oscars, and no Emmys.” And so many people around the world have praised her for making these courageous statements.

Um, everything you have just read in those three paragraphs is completely false – I just made it all up. However, if you simply change a few words around, you will have something that is 100 per cent true, and was just said and shared throughout the world’s media the other day.

I refer to 72-year-old singer for Fleetwood Mac, Stevie Nicks. A few days ago she gave a lengthy interview, and her decision to abort her unborn daughter in order to make her rock career possible is discussed. This is what is said in the article:

Women’s rights have been on Nicks’ mind since the death of her “hero”, the US supreme court justice Ruth Bader Ginsburg, last month. “Abortion rights, that was really my generation’s fight. If President Trump wins this election and puts the judge he wants in, she will absolutely outlaw it and push women back into back-alley abortions.”

Nicks terminated a pregnancy in 1979, when Fleetwood Mac were at their height and she was dating the Eagles singer Don Henley. What did it mean to be able to make that choice? “If I had not had that abortion, I’m pretty sure there would have been no Fleetwood Mac. There’s just no way that I could have had a child then, working as hard as we worked constantly. And there were a lot of drugs, I was doing a lot of drugs … I would have had to walk away.” She pauses. “And I knew that the music we were going to bring to the world was going to heal so many people’s hearts and make people so happy. And I thought: you know what? That’s really important. There’s not another band in the world that has two lead women singers, two lead women writers. That was my world’s mission.” www.theguardian.com/music/2020/oct/14/stevie-nicks-on-art-ageing-and-attraction-botox-makes-it-look-like-youre-in-a-satanic-cult

Well there you have it. Let’s rise to the top of the rock empire on the backs of dead babies. A terrific trade-off she seems to think. But of course by her logic – that a child can impede a successful career and the climb to the top – then the idea of a movie star killing an adolescent son who is weighing her down and making it to the top makes perfect sense.

In both cases being a champ in your profession is far more important than mere human beings. Children become just worthless and expendable commodities which can be brushed off at will if they are impeding your desire to make it big in your profession.

It is possible, even today, that some mothers may still believe that what they are doing is nothing more than getting rid of a clump of cells – not unlike clipping your fingernails. But it seems Nicks knew better than that. A terrific piece by Kyle Smith is worth quoting from here:

Some women have no interest in becoming mothers, but that isn’t the case with Stevie Nicks: She did want to be a mother, very badly. Witness the gently horrifying soft-rock classic “Sara,” the only rock song I can think of in which the singer muses about having actually killed another human being. Neither Bob Marley nor Eric Clapton really shot the sheriff, but Nicks did kill Sara, and that’s what infuses the song with a delirium of regret. It was over a decade after the song appeared on the 1979 Fleetwood Mac album Tusk that the world learned, via Don Henley, that Nicks had conceived a child with him, named the child “Sara,” then had an abortion. In 2014, Nicks finally confirmed that Henley’s story, which he told in 1991, was “accurate.”

“Sara” isn’t just about abortion; in Nicks’s emotions, the destruction of her child got mixed up with thoughts about her close friend Sara Recor, who had begun an affair with Nicks’s sometime lover Mick Fleetwood and would go on to marry him, in 1988 (the pair later divorced). In effect, Nicks lost a friend, a lover, and a baby, all around the same time, and so “Sara” is a triple layer of loss and regret that floats from one form of pain to another. In its original form, the song ran 16 minutes and worked in references to the heartbreak of the other three band members as well. As it is, given the acknowledged basis in abortion, “Sara” contains some of the most vivid double entendres in rock history: “Wait a minute baby, stay with me awhile” sounds like someone having second thoughts on her way to the abortionist. As for, “There’s a heartbeat, and it never really died,” how Nicks ever manages to sing that line without crying, I do not know.

Now Stevie Nicks is 72 and will go to her grave having never had a child, because she was too busy. Here is where anyone who has read the news lately must wonder if Nicks’s role model should have been someone other than Ruth Bader Ginsburg. How about someone who lived her life like Amy Coney Barrett? Barrett is the model of a busy professional woman. She is a leader in her church and a devoted wife. She has taught Constitutional Law, Civil Procedure, Federal Courts, and other classes, rising to the rank of full professor at the University of Notre Dame Law School. She researched, wrote, and published many lengthy academic papers. She served on the Advisory Committee for the Federal Rules of Appellate Procedure. She served as the faculty adviser to the Notre Dame Law Review, was a member of the American Bar Association’s self-study committee, and did much more volunteer work. She even served on the university’s parking committee. Then she went on to be a judge for the Seventh Circuit Court of Appeals….

There can be no doubt that the life of a rock star is a challenging one — sometimes you have to get up before noon, even — but Nicks, and every other woman who wants a baby but considers herself “too busy” with career stuff to entertain the idea, should look to Barrett as an example of how life expands to make room for more possibilities than you can imagine. Choosing another direction, Nicks — and millions of women whose stories are similar to hers — has instead had to grow old knowing that she has missed out on “a lot that would be here now.” www.nationalreview.com/2020/10/rbg-acb-and-stevie-nicks/

Women can have it all – but not necessarily at the same time. Life is about priorities. Those who think a terrific career with all the applause the world can offer justifies killing their own children tell us all we need to know about their priorities.

We should keep her in our prayers. She needs them.

18 Replies to “Without Killing My Son, I Would Not Have Succeeded as an Actress”