The choice is always between the real King and false kings:

The reasons why people hate Christ, Christians and Christianity are many, but a major factor in this hatred is the fact that Christ sets himself up as a king – the one and only real king – and challenges all other false claimants to the throne. 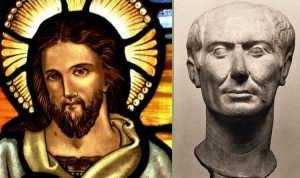 The chief challenger is of course self: the Christophobe hates the claims of Christ because it means they have to surrender their false pretences of being the centre of the universe, of being god. Human pride – and delusion – makes us think we are all there is, and we can call the shots.

But the all-powerful state – and those slavishly devoted to it – is another and related false kingdom that far too many worship. And the easiest way to pinpoint one very contemporary illustration of this is simply to look at how the state has treated Christianity during the COVID crisis.

In many places churches are STILL closed down, including here in Victoria. Yes, a handful of folks can gather inside, and a few more outside. But overwhelmingly it seems most folks – and incredibly, most Christians – have no problem with this at all! There is complete silence.

Never mind that plenty of church structures are built to hold hundreds, if not thousands of worshippers. But we are allowed only 10 inside. Really? Yet the shops are packed with shoppers, and so on. In Brisbane the other day 30,000 screaming fans could cram into a sporting arena to watch a football game, yet the churches remain basically off-limits.

The fact that so little protest about this has been heard by the Christian community demonstrates that for too many, they have another king. They are far more willing to slavishly go along with whatever the state says, even if it means allowing churches to be shut down indefinitely.

And this is a perennial problem. Religious folks have long put the state ahead of devotion to Christ. We see that happening all the time in the Gospels and the book of Acts. Consider what I just read again this morning. In Acts 17:1-9 we read about what happened when Paul and Silas were in Thessalonica.

Now when they had passed through Amphipolis and Apollonia, they came to Thessalonica, where there was a synagogue of the Jews. And Paul went in, as was his custom, and on three Sabbath days he reasoned with them from the Scriptures, explaining and proving that it was necessary for the Christ to suffer and to rise from the dead, and saying, “This Jesus, whom I proclaim to you, is the Christ.” And some of them were persuaded and joined Paul and Silas, as did a great many of the devout Greeks and not a few of the leading women. But the Jews were jealous, and taking some wicked men of the rabble, they formed a mob, set the city in an uproar, and attacked the house of Jason, seeking to bring them out to the crowd. And when they could not find them, they dragged Jason and some of the brothers before the city authorities, shouting, “These men who have turned the world upside down have come here also, and Jason has received them, and they are all acting against the decrees of Caesar, saying that there is another king, Jesus.” And the people and the city authorities were disturbed when they heard these things. And when they had taken money as security from Jason and the rest, they let them go.

While I have long emphasised what we find in verse 6 about the early believers ‘turning the world upside down,’ here I want to emphasise what is found in the next verse: “they are all acting against the decrees of Caesar, saying that there is another king, Jesus.”

Yep, because they said that Jesus is Lord, that meant that all other lords and all other gods are in fact false kings, false rulers. That is not to say that there is no place for human rulers and civil government – there is. But no human authority dares to set himself up against the one true God. That is idolatry of the highest order, and never ends well.

Indeed, as I recently wrote about, a few chapters earlier in Acts we read about one such leader who was judged by God for this very thing. See here: billmuehlenberg.com/2020/10/25/god-glory-and-ungodly-rulers/

And a similar story involving the chief priests who said “We have no king but Caesar” in John’s gospel I also have recently written about: billmuehlenberg.com/2020/10/20/who-is-king-christ-or-caesar/

These things are not just found in the New Testament. The attempt to challenge God and throw off his rightful place of rule goes way back to the book of Genesis of course. Our first parents, Adam and Eve sought to do it – with disastrous consequences – and folks have been seeking to do it ever since.

In Genesis 11:1-9 for example we read about the Tower of Babel episode. This was another direct challenge to God and his rule. That did not end well either. Whenever people seek to become fully autonomous, rejecting the rightful rule of God, they always end up in big trouble.

Of interest, just hours ago I found a book I had been looking for for a while (that is one problem with having a large library). The book was released the year I was born, and is penned by the German Catholic philosopher Dietrich von Hildebrand (1889-1977). The volume is called The New Tower of Babel (Sophia Institute Press, 1953, 1994). Early on he says this:

The real conflict today is between Christianity on the one hand, and a thoroughly anti-Christian conception of life on the other. This struggle has reached a decisive stage and has become a radical clash between two worlds, embracing all domains of life and human existence. The liberal age was an age of compromise. Notwithstanding its anticlericalism and its contention against Christian doctrine in the religious and philosophical fields, it retained Christian elements in the moral, sociological, juridical, and cultural spheres. Our present age, however, reveals a consistent, anti-Christian conception in every domain of life on the part of the enemies of Christianity.

The mark of the present crisis is man’s attempt to free himself from his condition as a created being, to deny his metaphysical situation, and to disengage himself from all bonds with anything greater than himself. Modern man is attempting to build a new Tower of Babel.

Exactly so. The situation described in Acts 17 is simply more of the same. Let me offer some commentary on this. In his commentary I. Howard Marshall says this about the charge levelled at the disciples: “This is an apt description of the positive content of the gospel with its claim that Jesus is Lord (cf. 16:31); it indicates how the focus had shifted very naturally from the proclamation of the ‘kingdom’ in the ministry of Jesus to the proclamation of the ‘king’ in the evangelism of the early church.”

John Stott comments this way about the charge:

Since the emperor was sometimes called basileus (‘king’), as well as kaisar (‘emperor’), how could the attribution of basileus to Jesus (7) not be a treasonable offence? The ambiguity of Christian teaching in this area remains. On the one hand, as Christian people, we are called to be conscientious and law-abiding citizens, not revolutionaries. On the other hand, the kingship of Jesus has unavoidable political implications since, as his loyal subjects, we must refuse to give any other ruler or ideology the supreme homage and total obedience which are due to him alone.

Another king! Well, they really have got the message. Jesus is Lord and Caesar isn’t; the fundamental ‘decree’ or ‘dogma’ of Caesar is that he and he alone is the emperor….

So was Paul being a loyal Roman citizen, or wasn’t he? It all depends on what sort of a ‘king’ you think he thought Jesus really was. It is easy to quote Jesus’ famous saying, ‘My kingdom is not of this world’, but what John actually wrote was ‘My kingdom is not from this world’ (John 1 8.36), with the clear implication that, though derived of course from elsewhere, Jesus’ kingdom was definitely for this world. And it is easy to show that the charge Luke reports against Jesus, that he was claiming to be a king (Luke 23.2), was, like the other accusations hurled around at the time, at best deeply misleading.

But when we stand back from the present incident and look at the whole sweep of Acts as it unfolds before our eyes, we begin to see a pattern emerging, a pattern which will grow and swell until it leaves us . . . wondering what on earth happened next. In Acts 1—12 Jesus is hailed as Messiah, king of the Jews, until eventually the present king of the Jews tries to do something about it but is struck down for his pagan arrogance. Now, from Acts 13 onwards, Jesus is being hailed as ‘another king,’ ‘lord of the world’; but there already is a ‘lord of the world,’ and anyone who knows anything about tyrants, particularly ancient Roman ones, knows well that they don’t take kindly to rivals on the stage.

And they still don’t today. All the more reason for Christians to get their allegiances and loyalties right. As the state takes ever more powers for itself, the Christian will need to determine who he will ultimately serve. We need to decide now, before things get even worse.

6 Replies to “‘There Is Another King’”