Both truth and unity are important:

Those who think Christians should be in full agreement on all matters of doctrine need to bear in mind that this may seem to be some sort of ideal, but it is often not the reality. And we see this when the church was still in its infancy. As I read through Acts 15 again today I was reminded of two very clear cases of division. 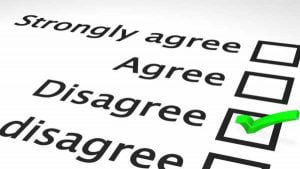 The bulk of the chapter deals with the Jerusalem Council. The first two verses lay out what that was all about: “But some men came down from Judea and were teaching the brothers, ‘Unless you are circumcised according to the custom of Moses, you cannot be saved.’ And after Paul and Barnabas had no small dissension and debate with them, Paul and Barnabas and some of the others were appointed to go up to Jerusalem to the apostles and the elders about this question.”

A second dispute (verses 36-41) was not theological in nature as much as a difference in missionary tactics. And it was quite a strong difference. As we read in verse 39: “And there arose a sharp disagreement, so that they separated from each other.”

I have of course often written about theological differences. One main point I keep seeking to emphasise is that on secondary doctrines there should be room to move, but on fundamental doctrines we need to hold the line. See this piece for example: billmuehlenberg.com/2009/03/16/on-truth-and-unity-part-one/

Here I want to revisit this issue as I do several things: look at two books that speak to this – an old one and a new one – and then provide a few recent examples of theological differences I was involved in. As to the books, I recently reread Mere Christianity by C. S. Lewis.

My original paperback copy of the book is nearly 50 years old now, well worn, and covered in highlighting. So I bought myself a brand-new hardback so that I might read it afresh. And one thing jumped out at me as I started to reread the classic work.

As Lewis discussed in his preface why he was promoting a “mere” Christianity that most believers would agree to, he said this: “There are questions at issue between Christians to which I do not think we have been told the answer.” That was a great relief to me.

That is because so often I toss and turn at night asking God for some real clarity on any number of biblical and theological topics. I am a teacher. I have the gift of teaching, and I have taught for nearly a half century now, whether in the classroom, or more recently on my website and on the social media.

I will be held to account for my teaching, so I want to make sure I get it right. But some issues we may not get final full disclosure on – at least in this life, and at least on some of the less vital doctrinal matters. So that one line was of real help to me. I do not necessarily have to have a full understanding of everything.

The second book I want to mention came almost 80 years after Lewis’s volume first appeared. I refer to Rhyne Putman, When Doctrine Divides (Crossway, 2020). This is a very helpful discussion of these very matters, and deserves a proper review at some point.

But for now I can mention a few things as found in its 300 pages. In his introduction he explains where he is coming from: “Unlike the spirit of theological minimalism that permeates so much of the ecumenical conversation, the discussion of doctrinal disagreement in this book celebrates both doctrine and difference… As lovers of the truth, we should not reduce our doctrinal disagreements to much ado about nothing. Healthy disagreements are an important part of sanctification and growth in grace.”

He reminds us of the well-known saying, “In essentials unity, in nonessentials liberty, in all things charity” and goes on to discuss Al Mohler’s theological triage approach. In medical triage, when there are a large number of patients or casualties, health care personnel determine the degrees of urgency to wounds or illnesses and decide the order of treatment.

Mohler says we should do something similar with theological matters, with first-, second-, and third-level theological doctrines. As Putman writes: “With the metaphor of triage, Mohler offers a taxonomy with both descriptive and prescriptive characteristics. The theological triage separates Christian beliefs from non-Christian beliefs, beliefs distinctive to denominations and traditions, and conflicting opinions within a tradition.”

The closing paragraph of the book is worth offering here:

The frailty of human interpretation should give us pause from interpretive pride and theological arrogance. It should also remind us of our great need for God’s much greater grace in helping us understand the message of Scripture. Because we are recipients of God’s grace, we should extend the same courtesy to those with whom we disagree. Love and patience should characterize our interpretive disagreements as imperfect readers of the Bible.

As I say, I will need to do a proper review of this important volume at some point. But let me close with a few recent examples, both from the social media. The first involves a Christian I know who lives overseas. She had posted something that was more a political matter than a theological one, but given the quote I just offered above, let me speak to it briefly.

I thought what she had posted was wrong – really quite wrong. I was actually shocked that she had posted it, and was ready to blast her for such unhelpful and misleading comments. But I sat on it for a while, prayed some, and then felt that I should just bite my lip and say nothing – even though what was said bothered me so very much.

The matter was indeed an important one, but so too was the relationship we had, which could have been lost if I was too zealous in ‘correcting her.’ Thankfully not long after that when she posted on similar issues she seems to have gotten a much better take on things. I am glad I did not potentially burn bridges with her earlier on when I had the chance to. She is a champ.

My second example is theological in nature. I had posted on the social media the following brief but theologically powerful statement from the late J. I. Packer:

I see myself primarily as an adult catechist, and in pursuit of that calling I formulate, teach, and preach from an evangelical catechetical syllabus conceived as follows:
The authority of the Bible.
The reality of the Trinity.
The sovereignty of God.
The tragedy of humankind.
The majesty of Jesus Christ, Saviour and Lord.
The necessity of faith.
The necessity of holiness.
The centrality of the church.
The circuitry of communion.
The ultimacy of doxology.

That got some good responses, but one person responded with this comment: “All good points but notice no mention of the Holy Spirit – Packers one weakness.” Now I am often not too thrilled when folks come along and either miss the spirit or point of what I am trying to say, or effectively derail the conversation.

Indeed, I was tempted to simply reply by saying that Pentecostals tend to regard all non-Pentecostals as being ‘weak’ on the Holy Spirit! But I knew the fellow well, and have taught classes with him in the past, and understood where he was coming from. So I said this:

“But he wrote entire books on the Spirit, so it was not really a weakness. When he speaks of things like faith and holiness, he knew full well they were the result of the indwelling Spirit. And if you read his various books, or even my article, you will know that when it came to the charismatic movement, he actually sought to take a mediating position between the pro and con positions.”

Again, a potential theological bunfight was averted, and bridges remain in place. As much as possible, this should be our aim. We are to strive for unity. This is a very key goal for all believers. But, as mentioned, there will come times when doctrinal error must result in separation.

As Charles Spurgeon put it, “To pursue union at the expense of truth is treason to the Lord Jesus Christ.” So we must be willing to abandon Christian unity when the truth of the gospel is at stake. But so often it is not, and it is a matter of getting along with other believers who have a different take on various theological issues, often doctrines of lesser significance.

The truth is, we need to take with utmost seriousness the prayer of Jesus as found in John 17:20-21. “I do not ask for these only, but also for those who will believe in me through their word, that they may all be one, just as you, Father, are in me, and I in you, that they also may be in us, so that the world may believe that you have sent me.”

8 Replies to “On Theological Differences”