What does history tell us about mass hysteria and deception?

Yes it happens: the masses can be easily deceived and carried away with evil. Closely related to mass deception is mass hysteria. That these things happen – and far too often – is clear enough. Why they happen is another matter. There are various ways we can try to answer this.

One could come up with psychological explanations. One could look at the power of media and modern technology. One could examine history and see what it tells us. It will be that last means that I will run with here. But let me first explain what has led me to pen this piece. 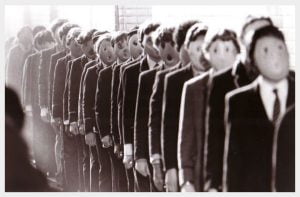 I take it as more or less a truism that if you have not lived in Melbourne, Australia this year, you cannot fully comprehend just how bad things have been with our interminable lockdown. I have discussed this repeatedly, mentioning the economic devastation, the mental health spike, the growing numbers of those suiciding, etc.

But something keeps shocking me and puzzling me. Various polls and surveys keep informing us that many Victorians – sometimes even the majority – are fully supportive of Premier Dan Andrews. This in spite of the obvious fact that it is he who is directly responsible for our devastating second wave which has obliterated the state.

Because of his utter incompetence with the hotel quarantine fiasco, and his inability to get contact tracing right, we have been devastated here, not only with 800 dead Victorians, but 1200 jobs being lost every day, and who knows how many who have taken their own lives.

The worst and the longest lockdown madness in the world, and people still think Andrews is doing a great job? Really? There is no other way to explain this than mass deception or mass hysteria. Sure, Victoria may be the most leftist state in the nation, with far too many unionists, lefties, Labor Party hacks, and public sector workers who have no probs at all with what has been happening.

They are not the ones losing their jobs, their careers, and their livelihoods. It is the private sector with all the small business owners, retailers, hospitality industry workers, etc., who have borne the brunt of all this. But still, there are so many mindless wonders, Danbots, zombies, and sheeple here in Victoria. It really is mind-boggling!

Indeed, there is something very, very wrong with Victoria. In any other normal locality, the masses would have long ago risen up and revolted over the seven months of lockdown insanity, internment camp conditions, and this megalomaniac who is acting like dictator for life.

But we find this happening often in history. On a much more sinister level, but still, not unparalleled, we think of how a civilised and democratic nation like Germany last century managed to see mass deception run amok, resulting in the Nazi menace unleashed on the world. How this occurred I discuss here: billmuehlenberg.com/2020/10/15/statism-and-crises-learning-from-20th-century-germany/

And, plenty of books and scholarly articles have been written to look at why this happened. Just how did the Germans fall so far, with so many ordinary citizens seemingly enthralled with Hitler and his grand plans? How could so many have just winked at the Holocaust?

Sure, many of them later claimed ignorance. ‘We did not know what was going on.’ ‘We were not aware of what was happening in the camps.’ Really. The putrid smoke rising up from the chimneys every day gave nothing away? All the boxcars full of screaming victims did not provide any clues?

Whether or not most German civilians really did know what was going on, when the Allies entered Germany, defeated Hitler, and liberated the concentration camps, one of the first things they did was force ordinary Germans to go check out the camps for themselves.

Consider these shocking paragraphs from the 1966 book, The Last Battle by Cornelius Ryan:

In recent days, what would prove to be the greatest hidden horror of the Third Reich had begun to be uncovered. All along the front in this tremendous week of advance, men had recoiled in shock and revulsion as they encountered Hitler’s concentration camps, their hundreds of thousands of inmates, and the evidence of their millions of dead.

Battle-hardened soldiers could scarcely believe what they were seeing as scores of camps and prisons fell into their hands. Twenty years later men would remember those scenes with grim anger: the emaciated walking skeletons who tottered toward them, their will to survive the only possession they had saved from the Nazi regime; the mass graves, pits and trenches; the lines of crematoriums filled with charred bones, mute and awful testimony to the systematic mass extermination of “political prisoners”—who had been put to death, as one Buchenwald guard explained, because “they were only Jews.”

Troops found gas chambers, set up like shower rooms except that cyanide gas instead of water sprayed from the nozzles. In the Buchenwald commandant’s home there were lampshades made from human skin. The commandant’s wife, Ilse Koch, had book covers and gloves made from the flesh of inmates; two human heads, shrunken and stuffed, were displayed on small wooden stands. There were warehouses full of shoes, clothing, artificial limbs, dentures and eyeglasses—sorted and numbered with detached and methodical efficiency. Gold had been removed from the dentures and forwarded to the Reich finance ministry.

How many had been exterminated? In the first shock of discovery no one could even estimate. But it was clear as reports came in from all along the front that the total would be astronomical. As to who the victims were, that was only too obvious. They were, by the Third Reich’s definition, the “non-Aryans,” the “culture-tainting inferiors,” peoples of a dozen nations and of a dozen faiths, but predominantly Jews. Among them were Poles, Frenchmen, Czechs, Dutchmen, Norwegians, Russians, Germans. In history’s most diabolical mass murder, they had been slain in a variety of unnatural ways. Some were used as guinea pigs in laboratory experiments. Thousands were shot, poisoned, hanged or gassed; others were simply allowed to starve to death.

In the camp at Ohrdruf, overrun by the U.S. Third Army on April 12, General George S. Patton, one of the U.S. Army’s most hard-bitten officers, walked through the death houses, then turned away, his face wet with tears, and was uncontrollably ill. The next day Patton ordered the population of a nearby village, whose inhabitants claimed ignorance of the situation within the camp, to view it for themselves; those who hung back were escorted at rifle point. The following morning the mayor of the village and his wife hanged themselves.

Along the British route of advance, the discoveries were equally terrible. Brigadier Hugh Glyn Hughes, the British Second Army’s Senior Medical Officer, had been worrying for days about the possibility of infectious diseases in a camp he had been warned about at a place called Belsen. Upon arrival there, Hughes discovered that typhus and typhoid were the least of his worries. “No photograph, no description could bring home the horrors I saw,” he said, years later. “There were 56,000 people still alive in the camp. They were living in 45 huts. There were anywhere from 600 to 1,000 people living in accommodations which could take barely 100. The huts overflowed with inmates in every state of emaciation and disease. They were suffering from starvation, gastroenteritis, typhus, typhoid, tuberculosis. There were dead everywhere, some in the same bunks as the living. Lying in the compounds, in uncovered mass graves, in trenches, in the gutters, by the side of the barbed wire surrounding the camp and by the huts, were some 10,000 more. In my thirty years as a doctor, I had never seen anything like it.”

I wrote about other such accounts in an earlier piece. Let me quote just a little from that article. I spoke about how General Eisenhower had toured the Buchenwald extermination camp:

During the camp inspections with his top commanders Eisenhower said that the atrocities were “beyond the American mind to comprehend.” He ordered that every citizen of the town of Gotha personally tour the camp and, after having done so, the mayor and his wife went home and hanged themselves. Later on Ike wrote to Mamie, “I never dreamed that such cruelty, bestiality, and savagery could really exist in this world.” He cabled General Marshall to suggest that he come to Germany and see these camps for himself. He encouraged Marshall to bring Congressmen and journalists with him. It would be many months before the world would know the full scope of the Holocaust — many months before they knew that the Nazi murder apparatus that was being discovered at Buchenwald and dozens of other death camps had slaughtered millions of innocent people.

General Eisenhower understood that many people would be unable to comprehend the full scope of this horror. He also understood that any human deeds that were so utterly evil might eventually be challenged or even denied as being literally unbelievable. For these reasons he ordered that all the civilian news media and military combat camera units be required to visit the camps and record their observations in print, pictures and film. As he explained to General Marshall, “I made the visit deliberately, in order to be in a position to give first-hand evidence of these things if ever, in the future, there develops a tendency to charge these allegations merely to ‘propaganda’.” billmuehlenberg.com/2014/08/25/make-them-watch/

My point here is not to equate the situation in Victoria and elsewhere today with what was found back then in Germany. It is to suggest however that for various reasons, the masses can be led astray – often quite easily and quite willingly.

As such, the lessons of history must always be heeded. Germany last century was a civilised and cultured nation, that slowly but surely moved into deadly tyranny. It was not the first nor the last nation to do so. We must remain vigilant.

16 Replies to “On Mass Deception and Tyranny”