Here are some helps as you read and study the book of Hebrews:

After the four gospels, the book of Acts, and the thirteen Pauline epistles, we come to the final nine books of the New Testament. The first one of these is Hebrews. It is a very important letter in the NT, but one that may be neglected by some Christians. As Raymond Brown says about the significance of this book:

If this epistle is read hastily or superficially, one might be tempted to imagine that its themes are antiquated, irrelevant, or even esoteric. The young Charles Hadden Spurgeon found it difficult to understand…. Yet although the letter’s illustrative material may not always belong to our thought world, its leading ideas have a striking relevance, and many of its most outstanding themes and practical teaching are of immense importance to late-twentieth century man. 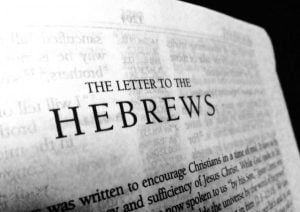 And Richard Phillips reminds us of why we must not overlook this book:

Few studies can be more profitable to Christians today than that of the Epistle to the Hebrews. In this letter, God exhorts us to persevere in the faith, even in the face of trials. Hebrews tells us why we must press on – because of the surpassing supremacy of Jesus Christ – and how we must press on – through faith in Christ, like the faith of those who went before us. Hebrews warns us of the pitfalls common to every age and through which many make a shipwreck of their souls, reminding us as well of the many resources available to us in our pilgrimage through this life.

Most valuable of all, the book of Hebrews offers a singular and matchless presentation of our Lord Jesus Christ. Showing forth Jesus’ supremacy to the angels, to Moses, to Joshua, and to Aaron, the author of Hebrews brings out features of Jesus portrait that are found nowhere else in the New Testament. Especially in his detailed description of Jesus as our perfect high priest-the most pointed presentation of this office found in all of sacred Scripture-we learn how and why Jesus “is able to save to the uttermost those who draw near to God through him” (Heb. 7:25).

Or as Jon Laansma put it, “The writer of Hebrews is one of the great pastoral theologians of the apostolic period. In spite of its persistent historical and theological difficulties, this summons to a faithful response to the divine voice sounds a clear note to a people that has no abiding city.”

Debate over authorship of this book has never been satisfactorily resolved, and there have been numerous proposals put forward as to who the author is, including Paul, Luke, Apollos, Barnabas and Clement. The pros and cons on authorship have filled entire libraries, with entire books devoted to such questions. As but one example, consider the 400-page volume by David Allen: Lukan Authorship of Hebrews (Broadman & Holman, 2010).

If authorship is not certain, we can work on other matters, such as a possible date of when it was written. That too is unclear, but a mid-60s date may be our best estimate. It seems fairly likely it was penned before the fall of Jerusalem and the destruction of the temple in AD 70.

Recipients appear to be Jewish Christians in Rome, and the main theme is the need to stand strong in Christ – the final and supreme revelation of God – and not revert to their pre-Christian Jewish faith. Jesus is pre-eminent over the angels, over the Mosaic law, and over the Old Testament priesthood and sacrificial system.

Encouragements to continue in the faith and not give up are found throughout the book, including the various warning passages (Heb. 2:14; 3:7-4:13; 5:11-6:12; 10:19-39; and 12:1-29). These strong warnings have been understood in various ways. See the volume edited by Bateman that I mention at the end of this piece for a collection of viewpoints on this.

As George Guthrie says, “The writer of Hebrews is a biblical theologian of the first order. Yet, he brings his theology to bear in service of a critical pastoral need, struggling to help friends in danger of defecting from Christian commitment. In writing Hebrews his first concern is to present a dynamic, motivational, relational appeal, not a cold theological treatise.”

F. F. Bruce says this about Hebrews and the gospel:

The purpose of our author’s exegesis of Old Testament scripture, as of his general argument, is to establish the finality of the gospel by contrast with all that went before it (more particularly, by contrast with the Levitical cultus), as the way of perfection, the way which alone leads people to God without any barrier or interruption of access. He establishes the finality of Christianity by establishing the supremacy of Christ, in His person and in His work.

A simplified version of an outline of the book as offered by Thomas Schreiner is as follows:

1:1-4 Prologue: Definitive and final revelation in the Son
1:5-2:18 Don’t abandon the Son since he is greater than angels
3:1-4:13 Don’t harden your hearts since you have a Son and high priest greater than Moses and Joshua
4:14-10:18 Don’t fall away from Jesus’ Melchizedekian priesthood since it is greater than the Levitical priesthood
10:19-12:29 Concluding exhortations and warnings
13:1-25 Epilogue: Final exhortations

Since typology plays such a key role in this book, let me offer some words on this by Schreiner:

Typology exists when there is a historical correspondence between events, institutions and persons found in the OT and the NT. I argue that typology does not merely represent correspondence but a correspondence intended by God. In other words, there is a prophetic character to biblical typology. It is not merely retrospective but prospective. It is not merely the case that the author of Hebrews detects patterns and correspondences as he reflects on OT revelation. Since God is sovereign over all of history (e.g., Isa 46:9–11), he plans the end from the beginning. Hence, the events, institutions, and persons in which there is a typological relationship are not merely accidents of history, nor are they simply employed by God as helpful illustrations. On the contrary, the persons, events, and institutions were intended from the beginning as anticipations of what was to come.

In his popular-level commentary on this book, N. T. Wright says this in his introduction:

The letter to the Hebrews is one of the most bracing and challenging writings in the New Testament. People often find it a bit difficult, because it uses ideas that are strange to us. But, like meeting a new friend, we will find as we get to know it that it is full of interest and delight, with a powerful message that comes home to today’s and tomorrow’s church as much as it did to yesterday’s.

Some scholarly and critical commentaries (mainly of a conservative and evangelical slant) would include these:

As to my preferred critical commentaries on Hebrews, perhaps run with Cockerill, Lane, O’Brien, and Schreiner.

There are also expository and devotional commentaries one should be aware of. A few would include:

And for those who are really keen, there is of course the classic 7-volume set by the Puritan great John Owen (1668-1674).

Finally, a few books looking at various aspects of Hebrews:

Bateman, Herbert, ed., Four Views on the Warning Passages in Hebrews (Kregel, 2007)
Lane, William, Hebrews: A Call to Commitment (Hendrickson, 1985)
Lloyd-Jones, Martyn, A Merciful and Faithful High Priest: Studies in the Book of Hebrews (Crossway, 2017)
O’Brien, Peter, God Has Spoken in His Son: A Biblical Theology of Hebrews (IVP, 2016)