Do Paul and James differ on the matter of faith and works? 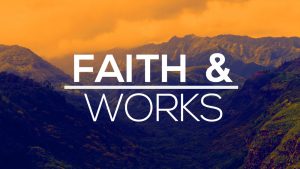 Entire libraries have been filled with books on this matter, so I will offer nothing new and unique, but simply give a brief introduction to it. And let me state at the outset that my position is that of so many others who argue that James and Paul are not mortal enemies here but are saying the same thing in slightly different ways.

Let me start by offering some of the basic biblical texts on this. As to Paul, one would have to mention these sorts of passages in which he argues against any notion of salvation by works:

“[We] are justified by his grace as a gift, through the redemption that is in Christ Jesus, whom God put forward as a propitiation by his blood, to be received by faith. This was to show God’s righteousness, because in his divine forbearance he had passed over former sins. It was to show his righteousness at the present time, so that he might be just and the justifier of the one who has faith in Jesus. Then what becomes of our boasting? It is excluded. By what kind of law? By a law of works? No, but by the law of faith. For we hold that one is justified by faith apart from works of the law.” (Romans 3:24-28)

“What then shall we say was gained by Abraham, our forefather according to the flesh? For if Abraham was justified by works, he has something to boast about, but not before God. For what does the Scripture say? ‘Abraham believed God, and it was counted to him as righteousness’.” (Romans 4:1-3)

“For by grace you have been saved through faith. And this is not your own doing; it is the gift of God, not a result of works, so that no one may boast. For we are his workmanship, created in Christ Jesus for good works, which God prepared beforehand, that we should walk in them.” (Ephesians 2:8-10)

“But when the goodness and loving kindness of God our Savior appeared, he saved us, not because of works done by us in righteousness, but according to his own mercy, by the washing of regeneration and renewal of the Holy Spirit.” (Titus 3:4-5)

And of course the key passage for James is in chapter 2 where he argues that faith without works is dead:

What good is it, my brothers, if someone says he has faith but does not have works? Can that faith save him? If a brother or sister is poorly clothed and lacking in daily food, and one of you says to them, “Go in peace, be warmed and filled,” without giving them the things needed for the body, what good is that? So also faith by itself, if it does not have works, is dead.

But someone will say, “You have faith and I have works.” Show me your faith apart from your works, and I will show you my faith by my works. You believe that God is one; you do well. Even the demons believe—and shudder! Do you want to be shown, you foolish person, that faith apart from works is useless? Was not Abraham our father justified by works when he offered up his son Isaac on the altar? You see that faith was active along with his works, and faith was completed by his works; and the Scripture was fulfilled that says, “Abraham believed God, and it was counted to him as righteousness”—and he was called a friend of God. You see that a person is justified by works and not by faith alone. And in the same way was not also Rahab the prostitute justified by works when she received the messengers and sent them out by another way? For as the body apart from the spirit is dead, so also faith apart from works is dead. (James 2:14-26)

So, are they really saying two completely different things? ‘No’ would be my reply. The short answer would be this: James is arguing that real saving faith will result in good works. The key is what James asks at the end of verse 14: “Can that faith save him?” Or to make it even clearer, “Can that sort of faith save him?”

James is saying that real faith does save, and it is demonstrated by a life of good works. He is not saying that you have to have a lot of good works first to get saved. He is simply contrasting real saving faith with false faith. The real deal will be demonstrated or evidenced by works, while a fake faith will not.

Yes, not everyone follows this line of thought. Some do teach a salvation by works, or various combinations of faith and works. But the standard evangelical Protestant view (which I adhere to) is what I have spoken to: works are the result of saving faith, not the grounds for saving faith.

Many could be appealed to here on this, but let me feature just one. In his expository commentary on James, Daniel Doriani says, “To put it schematically, there are four ways to view the relationship between Salvation and Works.” The four are:

He of course affirms the last position, and says this:

Paul and James agree. In God’s court, believers are justified the moment they believe. When they trust in Christ as Lord and Savior, their sin is laid on Christ and Christ’s righteousness is imputed to them. Yet works also justify in this secondary sense: they vindicate God’s declaration that we are right with him. They prove that we are alive in Christ.

When we say a believer is justified by faith alone, we mean that the believer adds nothing—no works—in order to earn or gain God’s favor. Good works are necessary—not a condition prior to salvation but a consequence following salvation. Just as a healthy fruit tree by its very nature necessarily bears fruit, so a genuine believer necessarily performs good works as the fruit of a new nature. Real faith is effective Godward….

Paul denies that anyone can be saved by works (or “works of the law”). But he stresses the need for good works as much as Jesus and James do. A Christian must translate his new identity into moral action, actions both James and Paul call “works.” …

Entire books can also be mentioned here. Last year Chris Bruno authored Paul vs James: What We’ve Been Missing in the Faith and Works Debate (Moody, 2019). Early on he says this:

James and Paul are fighting the same battle defending the gospel, standing back-to-back fending off enemies on both sides. James is fighting against a false faith that denies good works are the necessary fruit of saving faith. When we swivel around to Paul, we see he is battling a wrong understanding of good works that fails to see faith in Christ as the only ground for our acceptance before God.

But a few more quotes on this will hopefully help to make it even more clear that James and Peter speak as one on such matters. First, C. Samuel Storms in his book The Grandeur of God says this:

In respect to justification, grace stands opposed to works (Rom. 4:4-5; 11:6). However, in respect to sanctification, grace is the source of works. This simply means that whereas we are saved by grace and not of works, we are saved by grace unto good works. Good works are the fruit, not the root, of God’s saving grace (see esp. Eph. 2:8 -10). It thus comes as no surprise that in Scripture grace and salvation stand together as cause is related to effect. It is the grace of God which ‘brings’ salvation (Titus 2:11). We are saved by grace through faith (Eph. 2:8-9).

And R. C. Sproul in Pleasing God puts it this way:

We remember that justification is by faith alone, but not by a faith that is alone. The central affirmation of all Protestantism is that we are justified by faith and not by works. But the instant that true justifying faith is present in the life of the believer, the person begins to change. That change will be evidenced in a life that moves to obedience. Good works necessarily flow out of true faith. The works do not justify us. It is the righteousness of Christ that justifies us. But if the works do not follow, it is proof positive that we do not have genuine faith and are therefore still unjustified people.

There is no such thing as a carnal Christian in the antinomian sense. The concept is as perilous as it is self-contradictory. The peril is that people begin to think that all that is required to be saved is a profession of faith. But the Bible warns us that people can honour Christ with their lips while their hearts are far from Him (Matt. 15:8). They can say they have faith without truly owning what they claim to possess: “What does it profit, my brethren, if someone says he has faith but does not have works? Can faith save him?” (James 2:14). James answers his own question by declaring emphatically that such a faith is dead (James 2:17) and can save no one.

Or to put it as simply and tersely as possible, the words of A. W. Tozer should suffice here: “If we are not changed by grace, then we are not saved by grace.”

So, do Paul and James differ fundamentally on the issue of faith and works in the process of salvation? No, they are both on the same page.