Those reading through the book of James will find these resources of some real help:

Although only five-chapters long, James is an interesting and perplexing book for so many reasons. Questions abound as to almost everything about the book, including its unifying theme, its organisational composition, its intended purpose and audience, etc. Dan McCartney puts it this way in his commentary:

Controversy has continued to swirl about the book, however. Almost every aspect of interpretation, its author, its date, its original audience, its theological substructure, its organization (or lack of organization), its overall purpose (especially whether it is in any way a reaction to some form of Paulinism), its unity, and even the meaning of several of its words, phrases, and sentences have been heavily debated, and many matters remain without anything close to a scholarly consensus. 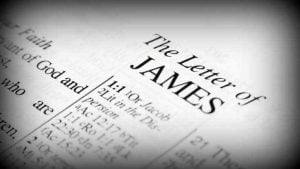 Or as Donald Hagner says about it:

James has been acknowledged as perhaps the most puzzling book of the NT and for a variety of reasons. Its fragmented form and content are unusual, its organization is unclear, its authorship and therefore date and provenance are uncertain, its addressees a question mark, its purpose vague, its Christian doctrine practically nil, and hence its reception in the early church was notably slow. Very little indeed is known concerning this document, and the challenge is to make what we can from its content alone.

Also, many have wondered if it conflicted with the Pauline message of faith that saves, rather than works that saves. While Luther did refer to it as an “epistle of straw,” he did not deny the canonical status of the book as some have supposed. He included it in his German New Testament.

Daniel Doriani discusses some of the reasons that Luther and others had some big questions about James:

First, Luther says, James contains almost nothing of Christ and the gospel. By this he meant that he found none of Paul’s gospel of justification by faith. Instead he found an insistence on works that, so he thought, supported the Roman Catholic position on faith and works. Second, Luther says, James does not appear to be written by an apostle. Third, scholars say that the clear, confident style of James’s Greek, the large vocabulary, and dense syntax, are too refined to come from the hand of a Galilean Jew. Fourth, in a criticism that might contradict the previous one, Luther and others charge that James is disorderly, flitting from topic to topic without any proper connection of the thoughts. Finally, the early church did not immediately receive James as part of the New Testament canon.

He goes on to briefly reply to these various charges and then says: “Readers may think that a reply to James’s critics is misplaced in the preface to an expository commentary. Yet the theological and moral value of James rests not upon the affection with which Christians receive it, but upon its origin, in divine inspiration, and its status in the canon.”

Concerning the authorship of James, that too is a big discussion, with a number of folks called James in the NT. But most scholars take it that James the brother of Jesus is the author of the book, and that it was likely written quite early on, perhaps around the mid-40s (James died in A. D. 62, and he makes no mention of the important Jerusalem Council of A. D. 48-49).

While scholars still differ on the overriding structure of the book, and the best way to outline it, there are still quite discernible themes that are to be found there. Douglas Moo for example offers these seven main themes: God; eschatology; the law; wisdom; poverty and wealth; the Christian life; and faith, works, and justification.

Let me speak to just two of these. Many have noted how the book of James resembles the wisdom literature of the OT (eg, Job and Proverbs). Wisdom is seen as being a gift of God. It is dependent upon the meditation of Scripture as well as the observation of the world. It means applying biblical truth to what we find happening around us.

This means that James is a very practical book. R. Kent Hughes notes that since this is likely the earliest NT book written, it “thus reflects Jewish-Christian teaching in its initial stages of development.” Moreover,

As to this supposed contradiction between James and Paul on the issue of faith and works, the simple answer is this: both agree that real saving faith results in good works. What James is dealing with in James 2:14-26 is a false faith. He is arguing: ‘can that kind of faith save you?’ And ‘No’ is the answer to that question. McCartney offers these comments:

The “works” that James has in view are “faith-deeds,” the kind of actions that are as endemic to and characteristic of faith as heat is to fire or as breath­ing is to life for human beings, as James will make clear in 2:20-26 ….

James’s principal point is not in doubt, in any case: that which distinguishes living faith from dead faith is works of faith. By no means does any of this suggest that one could create genuine faith by works, any more than an effort at mouth-to-mouth resuscitation could revitalize a corpse.

Douglas Moo puts it this way concerning this false faith: it is

a matter of speech without action (vv. 15-16); verbal profession without trust and commitment (vv. 18-19). It is this dead, barren faith that James designates by ‘faith alone’ in verse 24. Paul himself would have been second to none in condemning anyone who thought that this faith could justify…. James is concerned not that works be ‘added’ to faith, but that one possesses the right kind of faith, ‘faith that works’. Without that kind of faith Christianity becomes a barren orthodoxy and loses any right to be called faith.

But for a much more detailed discussion on this important matter, see this recent piece of mine: billmuehlenberg.com/2020/12/06/james-paul-faith-and-works/

More can be said, but in sum, Blomberg and Kamell say this about the book:

With this short letter, therefore, we have what is probably the first NT document written and the first existing Christian writing of any kind of which we know…. Faith in action, especially in social action, remains central for this author. Like the OT prophets and as with Jesus, James sees no tension between (and indeed weds closely together) orthodoxy and orthopraxy – correct belief and correct behaviour.

(Australians can find most of these books at Koorong.)