Real persecution IS coming for believers in the West:

Those with spiritual eyes to see and ears to hear realise that so much of what passes for Christianity today in the West is merely superficial, vaporous cotton candy, lacking in any real substance and significance. So much of it is, as the saying goes, a mile wide and an inch deep. 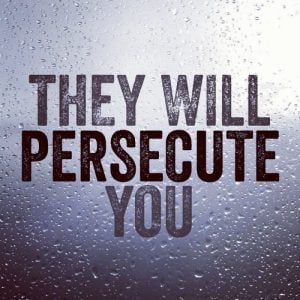 The trouble is, as Jesus warned about in the parable of the tares (Matthew 13:24-30), the real deal Christians and the fake Christians can be hard to tell apart, at least under normal circumstances. But one clear way to discern which is which occurs during times of persecution. That can separate the men from the boys real fast.

And anyone who has actually read both Scripture and church history knows that suffering, hardship and persecution is often the norm, with times of things going along smoothly actually much less frequent – at least when the church is being all that it should be, and not just playing games and being buddies with the world.

Although I make no claim to be a prophet, and even less of any claim to being divinely inspired here, I can say with a fair degree of certainty that persecution will ramp up big time in the West in the days ahead. It is of course already happening, but it seems clear that it will continue to worsen.

My basis for saying this involves 50 years as a Christian, with much of that time observing current events and being engaged in the culture wars, etc. Things WILL get worse. The only question is, how will Christians respond? As I said, it will be a welcome time of sifting, with the real and the fake believers much more easily distinguished.

To explore this matter more fully let me refer to Live Not By Lies by Rod Dreher. This is my fourth article in which I draw heavily upon his very vital new book, one which I strongly encourage all of you to read. My first piece on the volume – a book review – is found here: billmuehlenberg.com/2020/12/30/a-review-of-live-not-by-lies-by-rod-dreher/

As I have already stated in those pieces, he makes a very convincing case that we are indeed moving into really tough times, with the West well on the way to soft totalitarianism, and then hard totalitarianism. And he buttresses his case by telling the stories of many who endured communist tyranny.

And as I also have said, these stories alone are worth the price of the book. It is because we forget history, and do not learn from these stories, that we are doomed to repeat the failures of the past. Let me share a few more of these stories. Some are almost too gruesome to recount here, so I will spare you the details of the torture and abuse they faced.

But some general truths that these resisters share will be of help to us. For example, a Slovakian dissident, Jan Simulcik, was part of the persecuted church. Dreher tells his story:

In the 1980s, this house was a headquarters for printing and distributing Christian samizdat – underground literature forbidden by the communist regime. Simulcik, now in his fifties, was part of the movement as a college student. A Catholic priest posing as a worker lived in secret in the house back then. Simulcik and a handful of other Catholic students would come there at planned intervals to sort and package samizdat documents for distribution.

He and the others of course were taking huge risks in doing this. Prison, torture, and death would likely be the result if caught. Dreher goes on to say this:

Simulcik tells me that he and his cell of several other young Catholic men were all afraid. You would have been crazy not to have fear.

“The question is, which is going to win: fear or courage? he says. “In the beginning, it was mostly a matter of fear. But once you started experiencing freedom—and you felt it, you felt freedom through the things you did— your courage grew. We experienced all this together. We helped one another to gradually build up the courage to do bigger things, like join the Candle Demonstration [the 1988 mass Christian manifestation that was a precursor to the revolution a year later that peacefully brought down communism].”

“With this courage also developed our sense of duty, and our need to be of service to other people,” the historian continues. “We could see the products of our work. We could hold these samizdat books in our hands, and we could see that people really read them and learned from them. We saw what we did as service to God and service to people. But it took years for us to see the fruit of our labor and to see our communities grow.”

The value of small groups of believers living in solidarity was another key to surviving persecution. Dreher discusses a Baptist pastor in Soviet Russia, Yuri Sipko, who recalls the persecution of churches there decades ago:

“The strongest strike was against the preachers and the pastors, first of all. They took the preachers and pastors to prison. Other men stood up and filled their shoes,” Sipko tells me. “Then they took their houses of prayer. Then at that point began the practice of small groups — people who lived close to one another would gather in small groups. There was no formal structure of pastors or deacons. There were just brothers and sisters who read the Bible together, prayed together, and sang.”

“When they jailed my father, my mother was left alone,” he continues. “Several other sisters were left without husbands. We all got together. We found the Bible they had hidden. The women were reading the Bible to all of us. They were telling how people should live, what we had to hope for. They prayed together, and cried.”

These small groups continued the life of the Baptist church for decades, until Gorbachev released the last Evangelical prisoners of conscience.

“Sixty years of terror, they were unable to get rid of the faith,” the pastor muses. “It was saved specifically in small groups. There was no literature, no organizations for teaching, and even movement was forbidden. Believers rewrote Biblical texts by hand. Even the songs that we sang. I even remember writing these notebooks for myself. But they preserved the true faith.”

And please remember: a lot of these stories took place not all that long ago. And in many places today (China, North Korea, many Muslim majority countries) such hardship and suffering for the faith is still happening. How does our faith stack up? Are we Western Christians simply playing games? Playing church?

Dreher quotes Sipko again as he speaks about conditions in Russia now with no more persecution:

Christianity has become a secondary foundation in people’s lives, not the main foundation. Now it’s all about career, material success, and one’s standing in society. In these small groups, when people were meeting back then, the center was Christ, and his word that was being read, and being interpreted as applicable to your own life. What am I supposed to do as a Christian? What am I doing as a Christian? I, together with my brothers, was checking my own Christianity.

Dreher reminds us that we need to heed these dissidents and their warnings: “A time of painful testing, even persecution, is coming. Lukewarm or shallow Christians will not come through with their faith intact. Christians today must dig deep into the Bible and church tradition and teach themselves how and why today’s post-Christian world, with its self-centredness, its quest for happiness and rejection of sacred order and transcendent values, is a rival religion to authentic Christianity.”

And he has a whole chapter on the “gift of suffering.” In it he says:

To recognize the value in suffering is to rediscover a core teaching of historical Christianity, and to see clearly the pilgrim path walked by every generation of Christians since the Twelve Apostles. There is nothing more important than this when building up Christian resistance to the coming totalitarianism. It is also to declare oneself a kind of savage in today’s culture—even within the culture of the church. It requires standing foursquare against much of popular Christianity, which has become a shallow self-help cult whose chief aim is not cultivating discipleship but rooting out personal anxieties. But to refuse to see suffering as a means of sanctification is to surrender, in Huxley’s withering phrase, to “Christianity without tears.”

A while ago I was discussing with a friend how anti-Christian bigotry and persecution was ramping up in Australia and the West. I mentioned that years ago I had basically decided that when push comes to shove, when various state laws mean I must disobey the government and face the consequences (job loss, fines, jail time, etc), then that is how I would respond.

I said it would do no good to wait until that time comes and then make up our minds. We need to decide now how we will proceed in such circumstances. We need to resolve now to put the Lord first, regardless of the negative repercussions.

One Soviet dissident that Dreher discusses, Viktor Popkov, endured years of harassment from the secret police, and was put into prison in 1980. He said this: “Maybe this will sound strong, but the principles and the things you confess, you need to be ready to die for them – and only then will you have the strength to resist. I don’t see any other way.”