When Big Business and Big Government get into bed together, we are in big danger:

As a conservative, I have often written about the dangers of statism and Big Government. And I have also defended the free market – at least in principle. But what happens when Big Business and Big Government climb into bed together, scratching each other’s back? 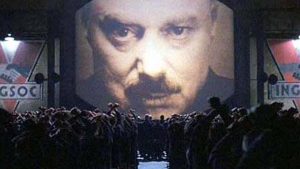 Big trouble is the answer, and we have a term for that: crony capitalism. And what happens when big, powerful and often monopolistic corporations get into bed with radical left politics? The answer is the same: big trouble. And we have a name for that as well: woke capitalism.

And what happens when big, powerful and often monopolistic media and tech giant corporations get into bed with the state and the left? Once again, the answer is the same: big trouble. And we also have a name for this: it is called surveillance capitalism.

As I say, I support capitalism and detest its failed rival: socialism. But needless to say, I have real problems with crony capitalism, woke capitalism, and surveillance capitalism. And all three are upon us big time. So I must add to my many older writings in which I warn about the dangers of Big Government new articles warning about where Big Business is heading.

Of course many have been sounding the alarm about this for years now. One very important new book has made the case that these new mutant forms of capitalism are easily leading us down the path of soft totalitarianism and will eventually lead us into hard totalitarianism.

In Live Not By Lies Rod Dreher argues that this hybrid capitalism along with the radical “social justice” agenda is taking the West down the tubes real fast. See my review of this very significant book here: billmuehlenberg.com/2020/12/30/a-review-of-live-not-by-lies-by-rod-dreher/

An important part of this volume is a collection of stories of a number of those who lived under Marxist totalitarianism and have lived to tell the tale that he appeals to. Their stories are such a powerful – but often unheeded – warning. He notes how deeply alarmed they are with the way Westerners are now undergoing the same sort of things that they once did.

Let me draw from Dreher’s fourth chapter, “Capitalism, Woke and Watchful.” He starts it with the story of a Czech couple who lived under communist tyranny. Their apartment of course was bugged, and they dared not say anything of substance since the State heard every sound they made. They are utterly shocked about how Americans by the millions are installing things like smart speakers in their homes where all their talk is overheard.

And Dreher mentions the East German secret police and how their job was made so much easier by ordinary citizens who, “with no prompting by the government, volunteered negative information about their friends and neighbors.” Hmm, sound just like the Covid snoops and snitchers of 2020! As Dreher says:

Should totalitarianism, hard or soft, come to America, the police state would not have to establish a web of informants to keep tabs on the private lives of the people. The system we have now already does this—and most Americans are scarcely aware of its thoroughness and ubiquity.

The rapidly growing power of information technology and its ubiquitous presence in daily life immensely magnifies the ability of those who control institutions to shape society in according to their ideals. Throughout the past two decades, economic and technological changes—changes that occurred under liberal democratic capitalism—have given both the state and corporations surveillance capabilities of which Lenin and Stalin could only have dreamed.

He also discusses the enormous power and influence of Big Business: “Now an elite club of global megacorporations are more powerful than many countries. Walmart has more annual revenue than Spain and more than twice as much as Russia.”

And the five internet monoliths – “Facebook, Apple, Amazon, Microsoft, Google – have an almost incalculable influence over public and private life. At the same time, Big Business has moved steadily leftward on social issues. . . . The embrace of aggressive social progressivism by Big Business is one of the most underappreciated stories of the last two decades.”

Couple this leftward move with surveillance capitalism and the picture gets even uglier. He tells us that we have NOT learned our lessons from Orwell. He says 70 million Americans already have smart speakers in their homes. The massive amount of personal data various groups have on all of us is simply staggering.

Writes Dreher: “You may have given up Facebook over privacy concerns, and may have vowed never to have a smart device under your roof, but unless you are a hermit living off the grid, you are still thoroughly bounded and penetrated by the surveillance capitalist system.”

We all have experienced this. The other day I looked up online a very particular and specific home appliance, and within moments that exact same item was being advertised on my personal FB page. They know everything about us, and they are talking to each other! The State can also far too easily get into the action. Critics will say that there are laws to prevent all this.

But over and over, dissidents told me that the law is not a reliable refuge: if the government is determined to take you out, it will manufacture a crime from the data it has captured, or otherwise deploy it to destroy your reputation. Both the spread of the cult of social justice and the reach of surveillance capitalism into areas that the Orwellian tyrants of the communist bloc could only have aspired to have created an environment favourable to the emergence of soft totalitarianism.

And the marriage of technology and totalitarianism already exists in places like communist China. Dreher quotes one writer who says, “China is about to become something new: an AI-powered techno-totalitarian state.” As I said in my book review:

“The Chinese social credit system is a clear case in point: it ‘automatically tracks the words and actions, online and off, of every Chinese citizen, and grants rewards or demerits based on obedience.’ Doing what the State approves of will get you a higher social credit score, while doing what it frowns upon will result in a downgrade.”

The bottom line: a Chinese citizen cannot participate in the economy or society unless he has the mark of approval from Xi Jinping, the country’s all-powerful leader. In a cashless society, the state has the power to bankrupt dissidents instantly by cutting off access to the internet. And in a society in which everyone is connected digitally, the state can make anyone an instant pariah when the algorithm turns them radioactive, even to their family.

And the Chinese leaders are ensuring that the next generation cannot properly fight back: “The state’s information-control apparatus has demolished the ability of young Chinese to learn facts about their nation’s history in ways that contradict the Communist Party’s narrative.” Scary stuff indeed.

They are not alone: all this is happening here, especially thanks to the corona panic. Numerous states and businesses have already told us you will NOT be able to travel, do business, or be schooled without a mandatory vaccine. This is just like what is happening in communist China, and it sure sounds like the spooky stuff we read about in the book of Revelation.

He tells the story of one Slovakian teen whose parents lived under totalitarianism. She was in the US in the mid-2000s as a student, not too long after 9/11. Says Dreher:

“I saw that people were willing to sacrifice a lot of their personal freedoms for the sake of national security,” says Petra. “There was a lot of talk along the lines of, ‘I don’t care if they listen to my phone calls or read my emails or text messages, because I don’t have anything bad to say.’ So that was really strange for me, because I thought, this is something really personal. And it doesn’t really matter if you do or don’t have something bad to say. It’s just my personal space.”

How strange it was for a teenager to come from a culture just emerging from the reality of one careless word or indiscreet meeting having the potential to destroy a person’s life, only to find herself living temporarily in one place where everyone said whatever they wanted to, without a care in the world.

He goes on to discuss Western young people raised on smartphones and social media who are willing to share everything to everyone: “having become habituated to sharing reams of personal data with marketers simply by moving through their daily lives online, these young people are making themselves highly vulnerable to manipulation by corporations and outside entities. To put it bluntly, we are being conditioned to accept a Westernized version of China’s social credit system.”

He closes the chapter this way:

Big Business’s embrace and promotion of progressive social values and the emergence of “surveillance capitalism”—the sales-directed mining of individual data gathered by electronic devices—is preparing the West to accept a version of China’s social credit system. We are being conditioned to surrender privacy and political liberties for the sake of comfort, convenience, and an artificially imposed social harmony.

This is the brave new world of the twenty-first century. Christian dissidents will be unable to mount an effective resistance if their eyes aren’t open to and focused on the nature and methods of social justice ideology and the ways in which data harvesting and manipulation can and will be used by woke capitalists and social justice ideologues in institutional authority to impose control.

Sober words about a sober reality. I am not stretching things by saying this may be one of the most important books you will read this year. I strongly encourage all of you to get a copy or two, for yourself and for those you care about.