Here are some helps on a very relevant book for days like these:

This is a brief but important Old Testament book. While we know almost nothing about the author of this book, we do know a bit about the historical situation which it deals with. Judah is becoming increasingly evil and ungodly, and the prophet is greatly grieved by it. He implores God to act – perhaps like he did in Josiah’s time and bring about national repentance and revival. Instead, God chooses to use the evil Chaldeans (Babylonians) to punish Judah. 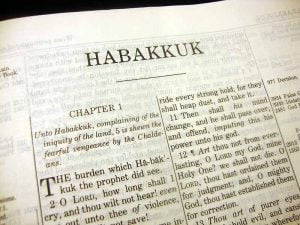 The concerns of this book are fully relevant to what we find happening today. The prophet questions God’s justice in the face of so much evil in the world, and questions how the enemies of God seem to flourish and go unpunished. When will he respond? As he famously asks in 1:3, “How long, O Lord, must I call for help but you do not listen?”

In particular, Habakkuk is greatly concerned with the corruption of national politics – both in Judah and on the larger international stage. Given what America and the West are going through at the moment, the relevance of the book is quite remarkable. We can be asking today the same questions that he asked 2 ½ millennia ago.

This book also deals with important questions of theodicy (why do the wicked flourish while God seems uninterested?). Habakkuk is so overwhelmed with what he sees all around him, that the very justice of God is questioned, at least at first. Eventually however he sees that justice is indeed affirmed.

A simple outline of the book is this:

The first question has to do with all the violence and injustice that exists in Judah. The answer however is not what he expects: God will deal with this by using the violent and unjust Babylonians as his tool of judgment. Like Job, God allows the prophet to ask hard questions – but the answers he gives are often not what was expected.

Use the Babylonians? Use such a wicked and violent nation? The Assyrians had previously been the big powerhouse empire on the block, but now the cruel Babylonians have taken over that role. They were also known for their rapacious violence, brutality and lust for power.

A few remarks by others about this are helpful at this point. Comments by O. Palmer Robertson on this are worth presenting here:

This characteristic of the instrument of God’s judgment on his people sounds strangely similar to the promise made to Israel at the time of their conquest of the land. They were to possess wells they had not dug, vineyards they had not planted, homes and cities they had not built (Deut. 6:10-11). Could it be that these barbaric Babylonians now were to step into the role once occupied by God’s people?…

In a very real sense, Israel is being placed in the role once occupied by the Canaanites before them. As those people once were driven away from their possessions because their iniquity was full, so now Israel must be driven away from its possessions because its iniquity is full. Their place of comfort, enjoyment, pleasure, relaxation, security, and refreshment shall be taken from them.

The rapacious behavior of the Chaldeans thus shall serve the Lord’s purposes. He shall make the wrath of man to praise him. Their oppressive ways shall be fitting judgment for the oppressive.

This is a main theme of the book. God can and does use evil nations, but they will not go unpunished. Heath Thomas says this:

Babylon is subservient to Yahweh’s universal rule. Babylonian invasion on Habakkuk’s account is not haphazard, nor is it due to political, social, or economic factors. Rather, the Babylonian rise to power and its campaign westward into the Levant is both providential and punitive. The God of Israel has orchestrated world events, and he is supremely in charge of the movements of history. God sets history into motion and bends it for his purposes, namely, the outworking of his covenant within the created order. God’s judgment and salvation of Habakkuk and the people of God are part and parcel of God’s rule, God’s kingdom, working itself in the world. God raises up the Babylonians for his own purposes (Hab. 1:5). But Babylon’s wicked empire will not survive; it is not fitting within the kingdom of God and the purposes of God in universal history. Rather, the Lord of the universe will call all nations to account, as Hab. 2:6-20 testifies.

The most well-known verse in the book – ‘The righteous will live by his faith’ (Hab. 2:4) – is featured three times in the New Testament: Romans 1:17; Galatians 3:11; and Hebrews 10:38. When the whole world is crumbling around you, more than ever a strong and robust faith and trust in God is needed. We need to take our eyes off our problems and focus on God. As David Prior writes:

Habakkuk is thus instructed – he and his people – to turn his eyes away from his own little world and watch God at work on a wider canvas. Like us, the prophet had become preoccupied, if not obsessed, with his own situation. His horizons had narrowed to the limits of his own vision and experience. He could not lift himself above the daily events of his particular circumstances. Because God seemed to be inactive, indeed absent, he was becoming sucked into a downward spiral of doubt and despair.

And true faith and trust mean that we must learn how to wait on God’s timing. God is just as concerned about justice in this world as we are – indeed, much, much more. But we demand justice NOW, while an all-wise and all-loving God knows the best time and the best way to see justice administered.

The last four verses of Habakkuk are in many respects the highlight of the whole book. Here we read about the prophet’s strong faith, and how he has learned to look to the Lord, and not to his surroundings and circumstances. As Warren Wiersbe remarks:

This is an amazing paragraph in the Word of God. It’s one of the greatest statements of faith found anywhere. Habakkuk said, in effect, “I can see the army coming. They are going to wipe everything out.” We could put this in everyday language: “Although the stock market might collapse and no jobs are listed in the newspaper, although no food is on the shelves in the supermarket and everything is closed down because nobody has any money, although everything is falling apart, I will still rejoice in the Lord. I will joy in the God of my salvation.

And F. F. Bruce says this about the section:

Unlike the hymns in the Psalter and other biblical canticles, Habakkuk’s psalm has not found a regular place in the church’s worship. But his closing declaration of joyful trust in God, in the most discouraging and unpromising circumstances, has been paraphrased in a few modern hymns, often sung most lustily, if not most intelligently, by congregations that have neither experience nor expectation of the straits here described. The last stanza of William Cowper’s hymn on “joy and peace in believing” runs thus:

Though vine nor fig tree neither
Their wonted fruit shall bear;
Though all the fields should wither
Nor flocks nor herds be there;
Yet God the same abiding,
His praise shall tune my voice,
For, while in Him confiding,
I cannot but rejoice.

Habakkuk himself is a living example of the righteous one who lives by faith.

I have earlier written some devotional pieces on this book, including: billmuehlenberg.com/2016/09/18/habakkuk-trust-god-nations/